So winter has finally released its grip on life here in the bush at Tuningi Safari Lodge, and evidence of new life is showing in all the trees, as new leaves are making an appearance in various shades of green.

This is welcoming as it breaks the monotonous grey scenery for the last 6 months or so.The migrant bird species such as the bee-eaters, swallows, cuckoos and raptors have all started coming back with great anticipation of the first rains and the prospect of vast amounts of insects which will fatten them up during the summer for the long haul back to where they came from. 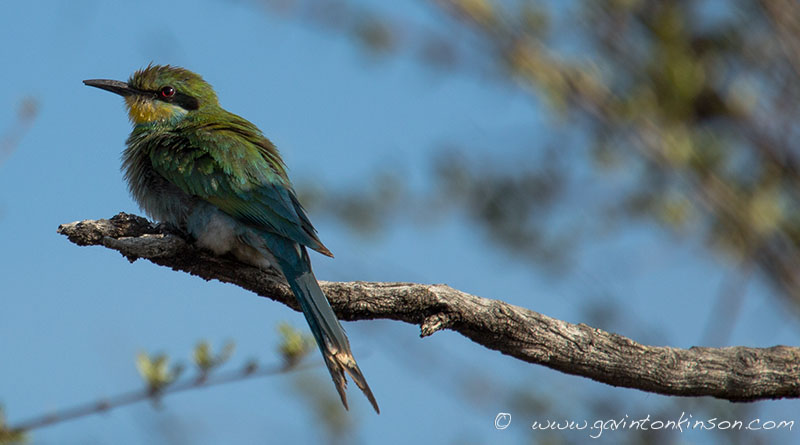 Lets kick off this months rangers report with a worthy 18 hyenas on a wildebeest kill in the south of the park !! Yes…. 18 at least. This is the largest amount of hyenas I have seen in one place in more than 8 years of guiding here at Tuningi, and it was quite a sight to witness.

Hyenas get a lot of bad press from many, and everyone seems to think that they only scavenge from other predators, however this is not the whole truth. As much as I have seen hyenas harassing other predators for their hard earned meals, hyenas are in fact very efficient hunters themselves, and they are capable of pulling down big prey if they join forces and cooperate together.

In Madikwe, I have very seldom seen hyena/lion interaction, and this proves that they should be given some more respect. On this occasion they adults must have killed the wildebeest, and fetched the cubs to come and join in on the feast. What a sighting !!! 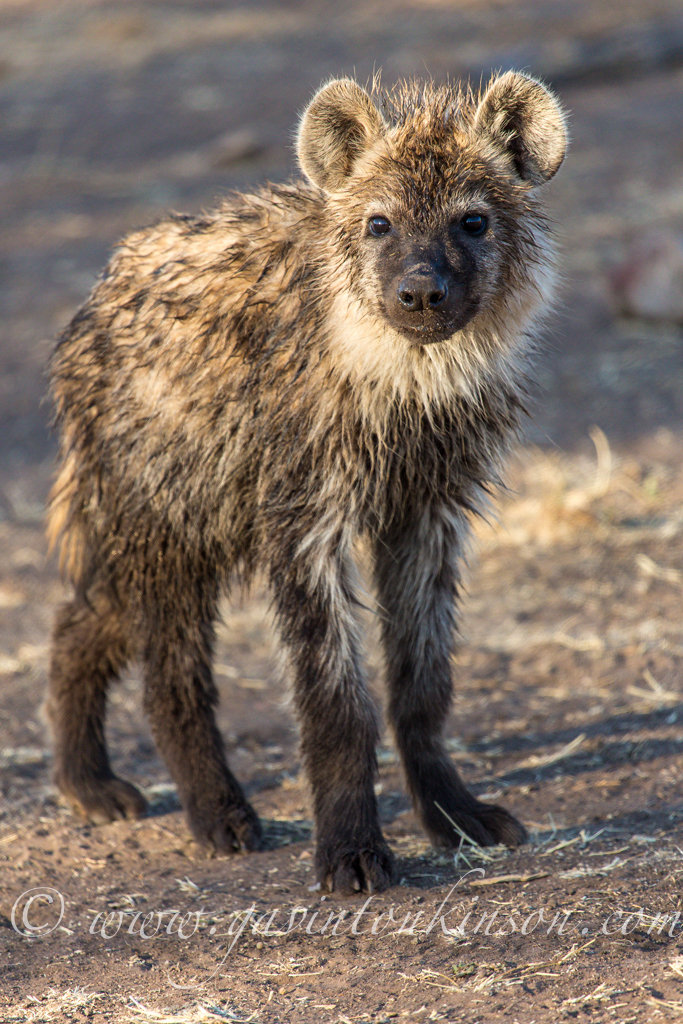 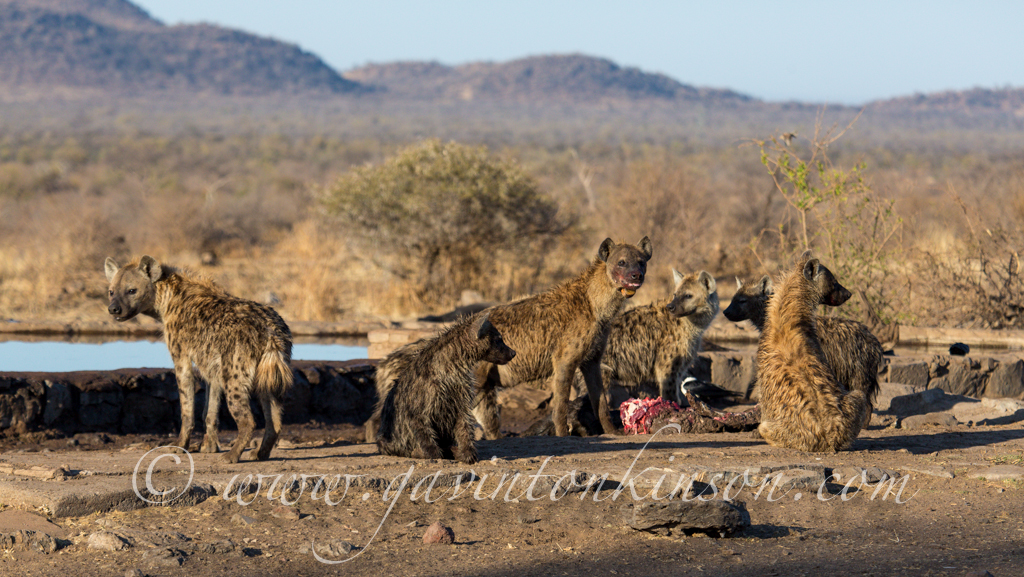 Samson, our young male leopard has been dazzling the guests once again, and has been on somewhat of a war path lately, as he is killing regularly. 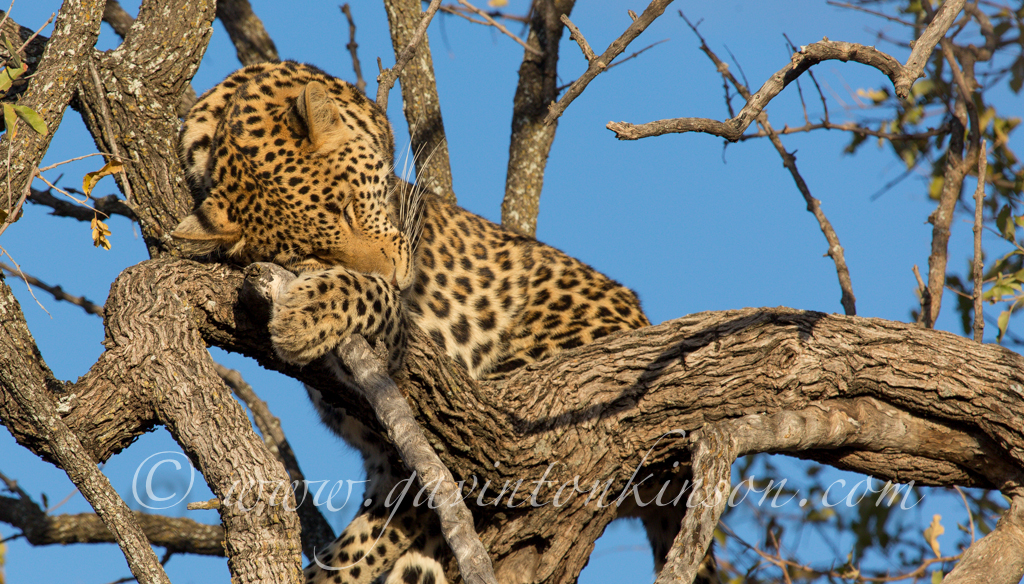 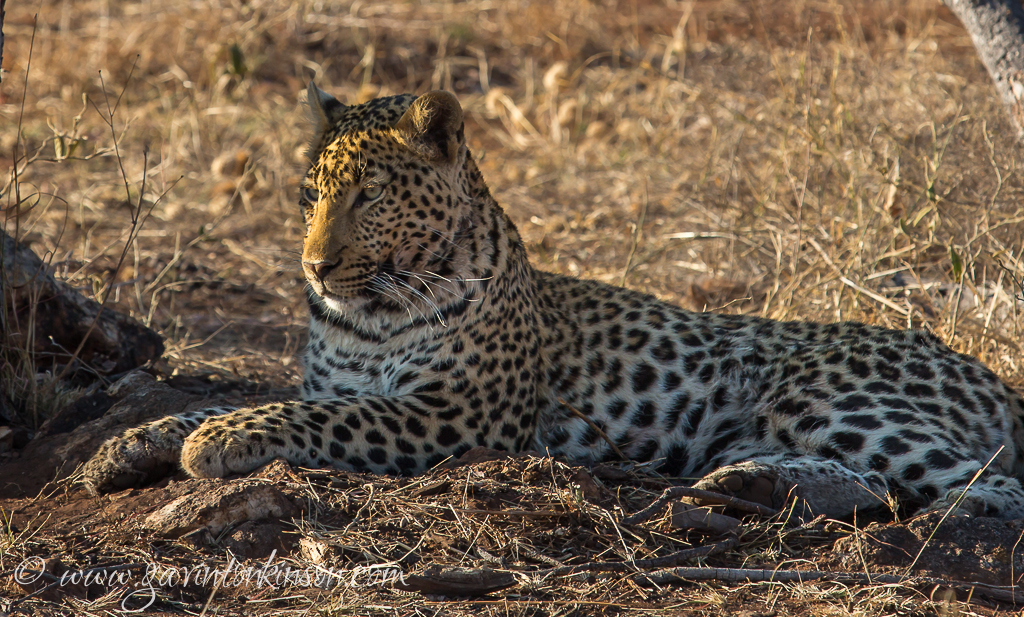 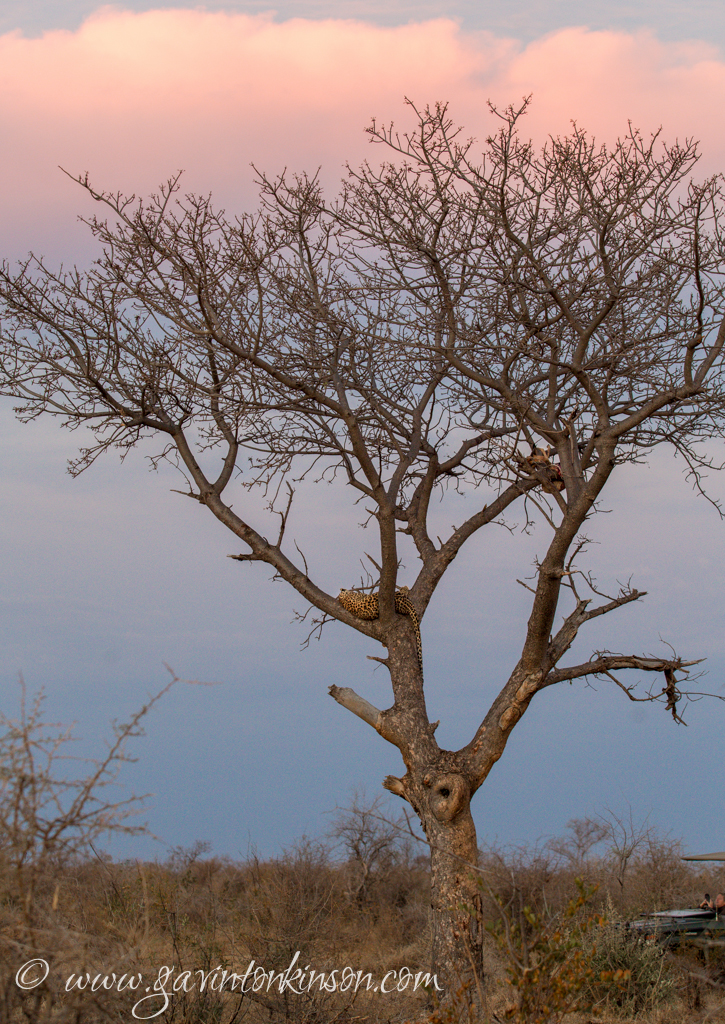 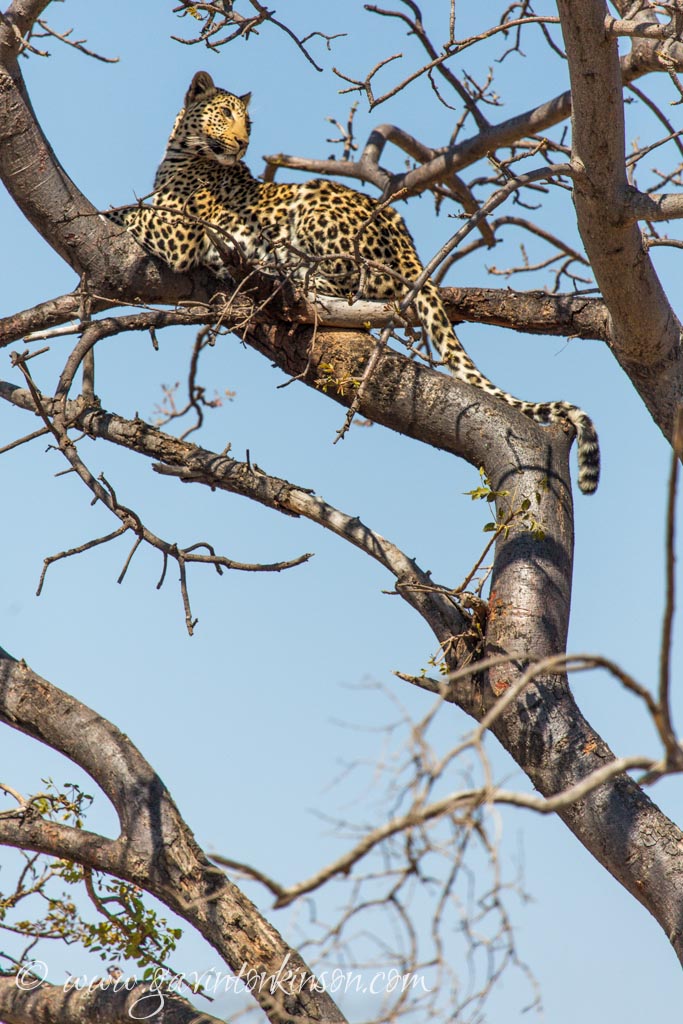 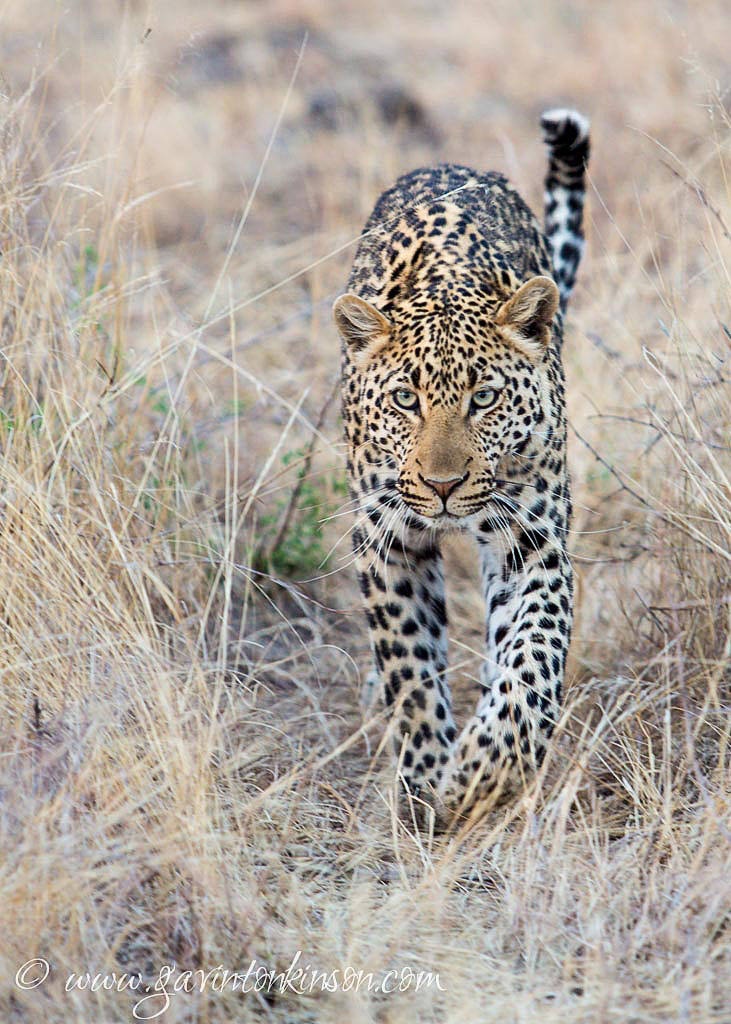 He managed to even kill a jackal one afternoon, which to some might be odd, but leopards are very resourceful hunters, and this is why they are found throughout most of Africa and Asia. He raised the jackal into the tree minutes before we found him, and he continued to throttle the life out of the jackal until he was happy that the life was drained from it. He then continued to eat the jackal, and he seemed to enjoy this…. I suppose meat is meat hey ? He was also mobbed by a couple of pied crows and in the images below, you can see that he was not happy with these loud mouthed aerial assaulters. 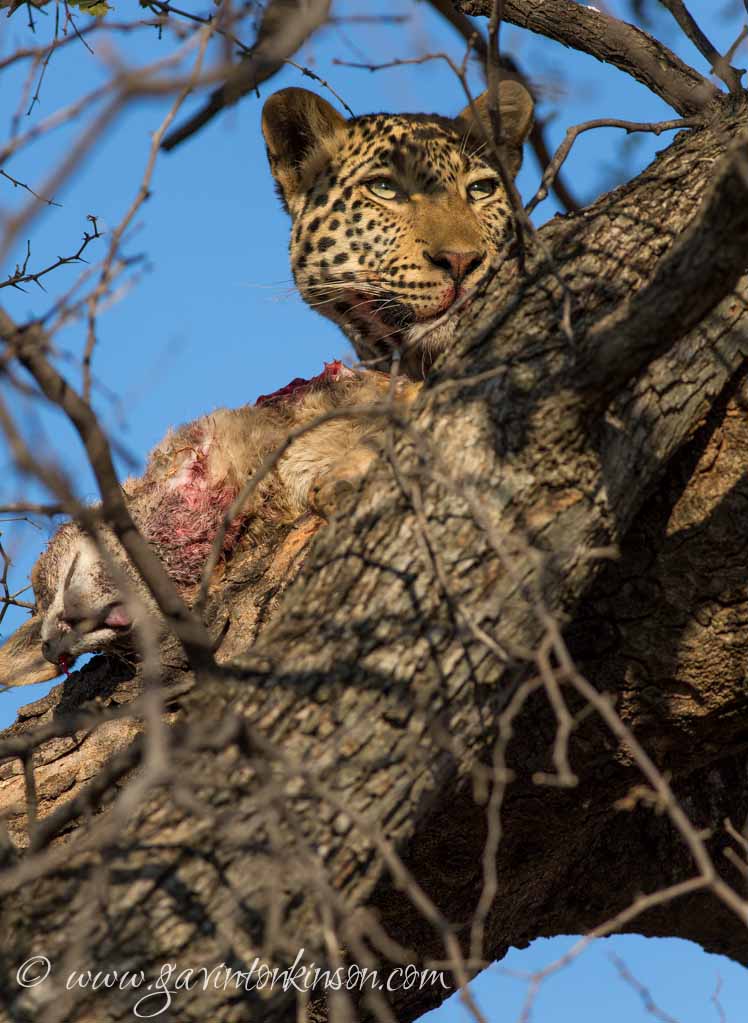 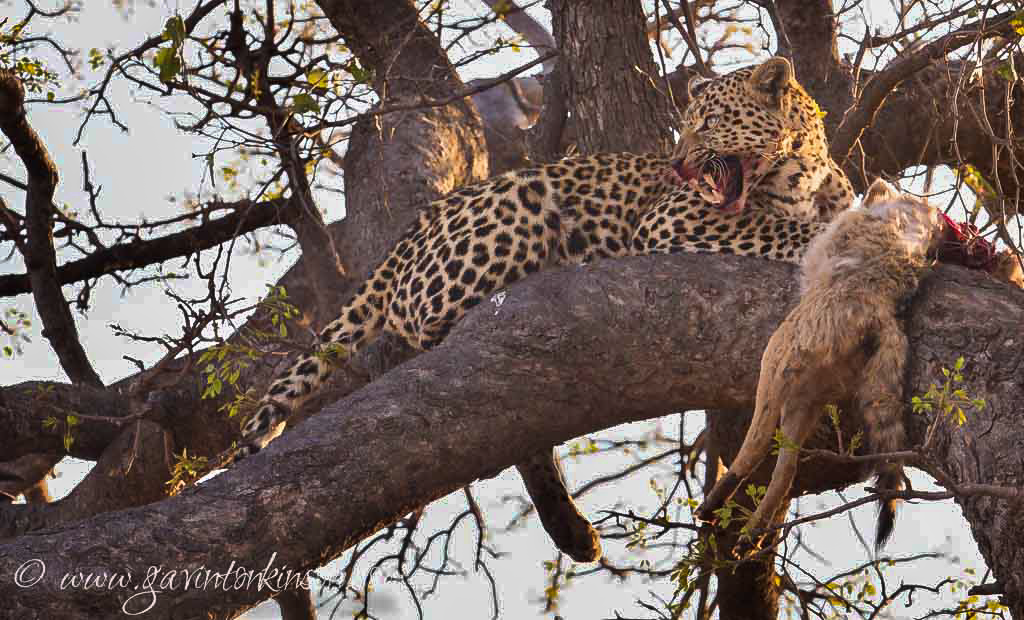 The 4 brothers cheetah, are doing extremely well as always, and are walking around most of the park in search of a female, which I am glad to say is now in the final stages of obtaining permits for their relocation to Madikwe, before they will be held in a boma facility to acclimatize. Once this is done, they will be fitted with GPS collars to follow their movement and interaction with the males in the park to see how the love story will unfold.

HOWEVER !! We still need money to purchase the collars, which cost around R30000. 00 each, so please contact us if you would like to donate towards this amazing cause !! 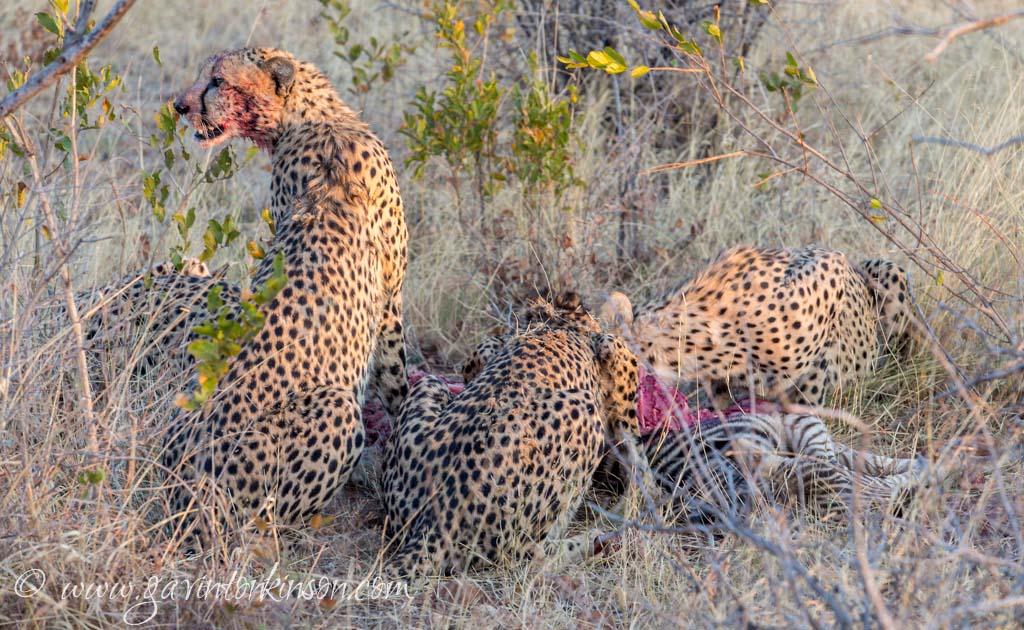 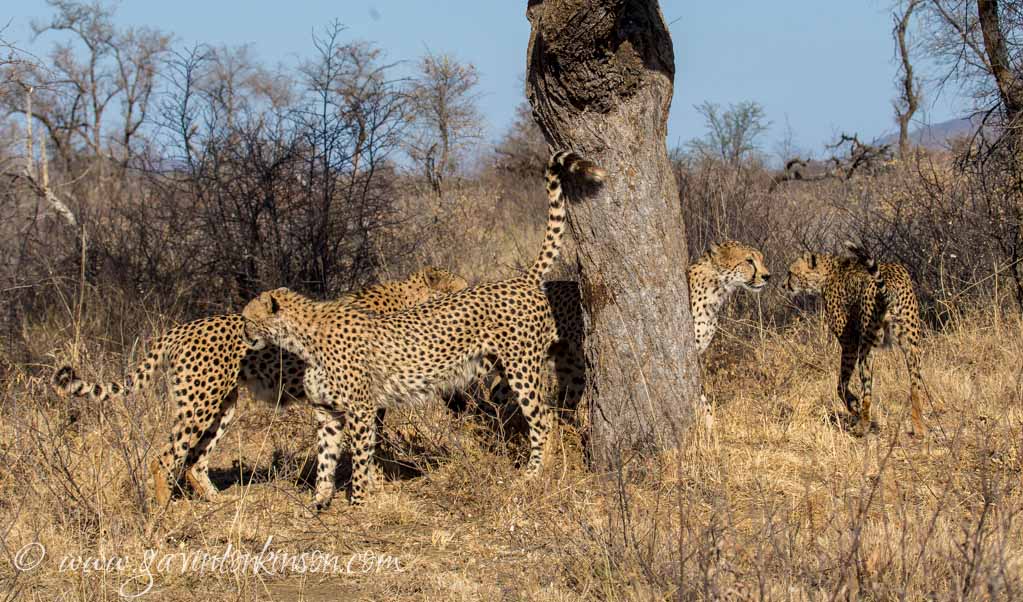 The territorial male lion feud is still very much alive, and the Naledi and Kgala males have been at each other’s throats again, and are roaring the roofs off around the lodge. The females have been acting very indifferently, and they are avoiding the clashes as best they can. The Chimbro/Bafefo male coalition have not made too many incursions into the west this month, and are seemingly just gaining size and strength for their return to the ridge to dispatch of the old Boys once and for all !! So times are exciting at the moment, and the day that our guests get to experience this war come to an end will be something to rant about for years to come !! 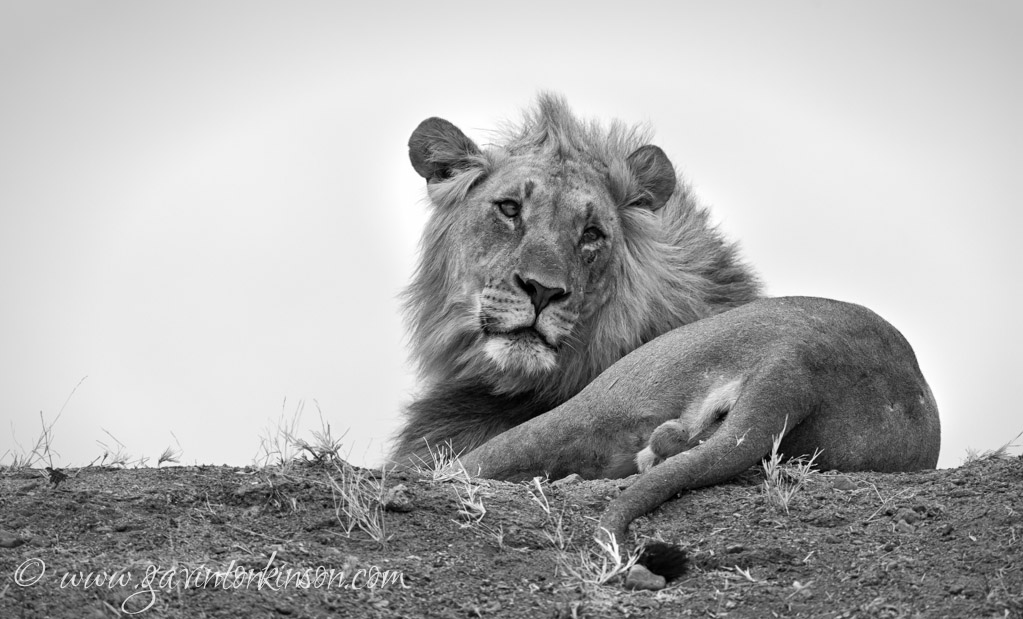 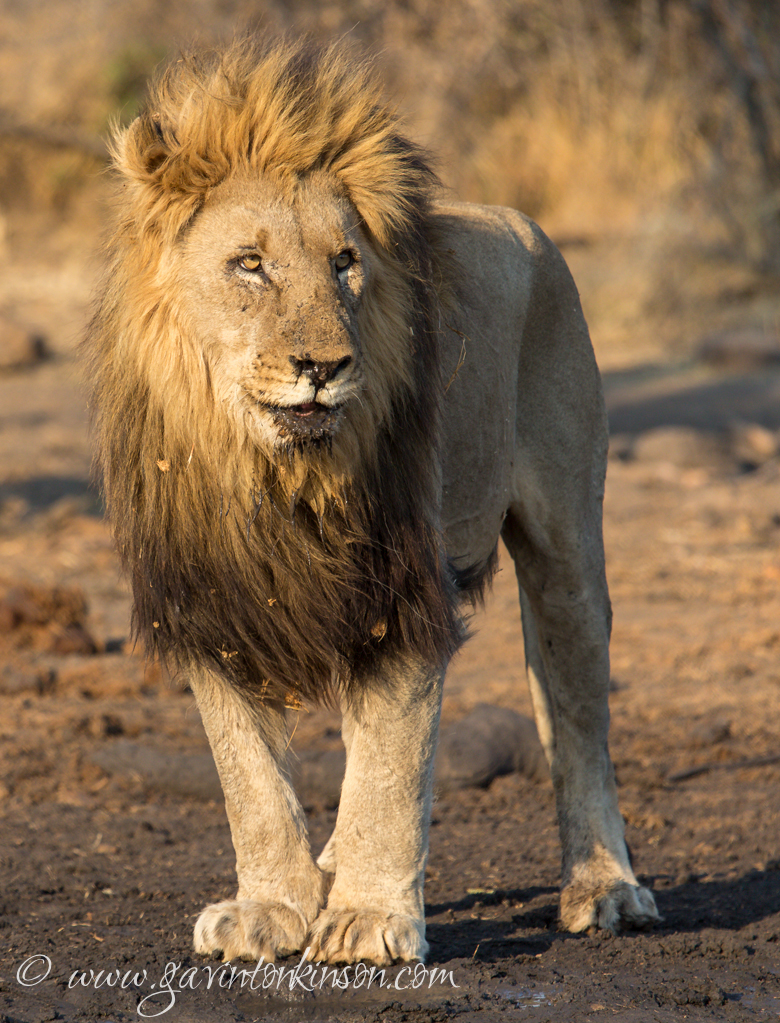 The Wild Dogs are still acting very strangely, in that the two packs are still split, and don’t seem to want to get back together again. This may be natures way of creating new packs, but one thing is for sure, they still have a serious appetite, and they are one of the few species of predators which get my hairs standing up on my neck when we go hunting with them in their crepuscular routines. 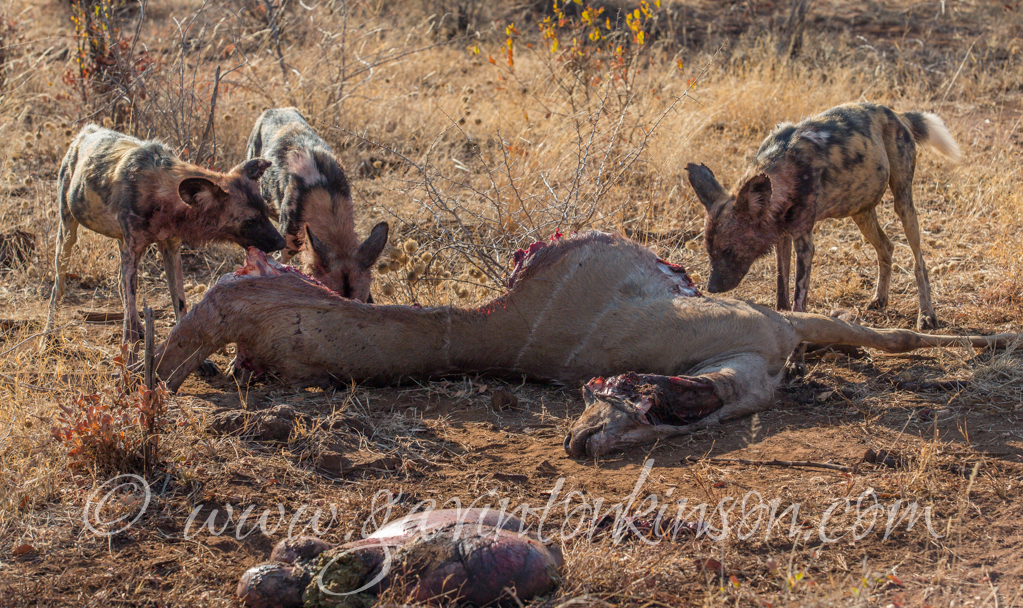 The other notable sightings this month was the Chimbro/Bafefo males on a wildebeest kill with a couple of jackals pushing their luck for a scrap or two. 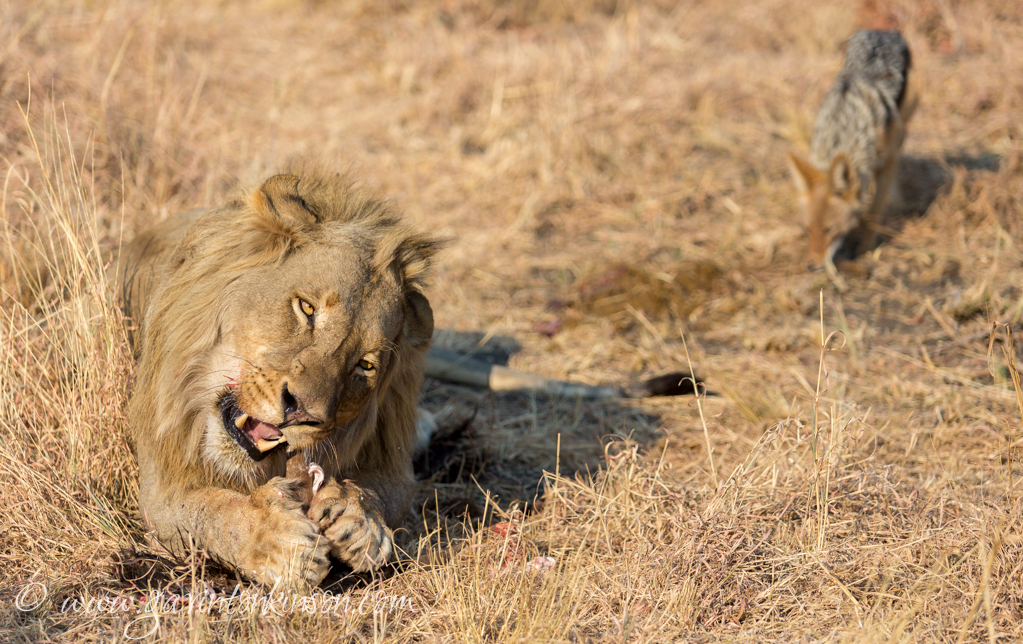 Inkwe pan to the south west of the lodge is a fort of great sightings at the moment, and is giving us some amazing elephant, rhino, buffalo and general game sightings, and in the afternoon you can go there and spend an easy 2 hours before the action ceases to a mild panic. 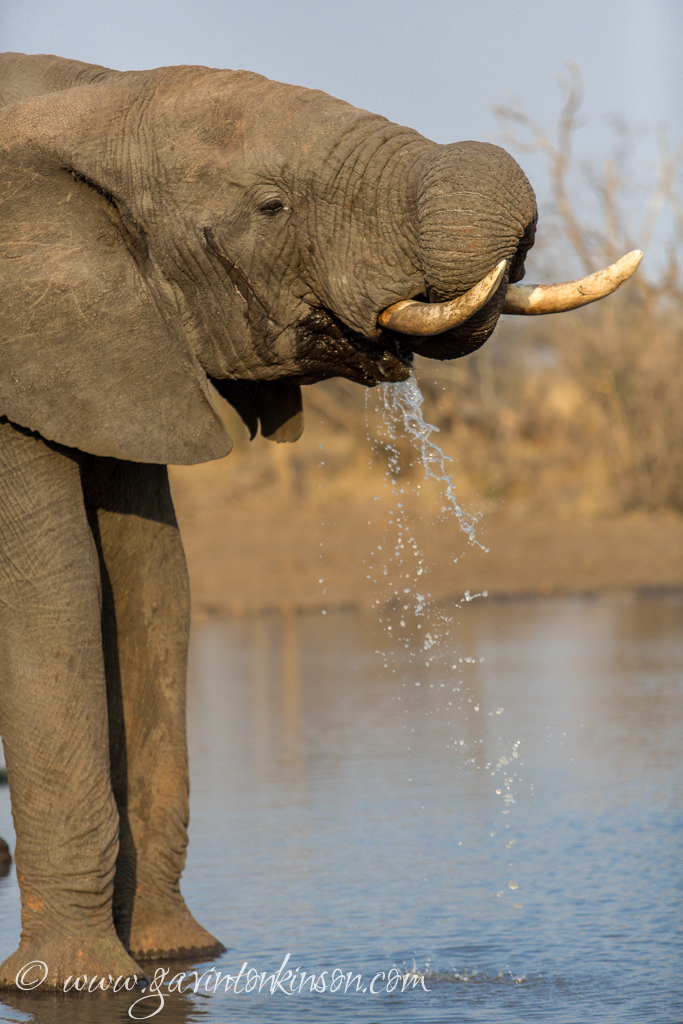 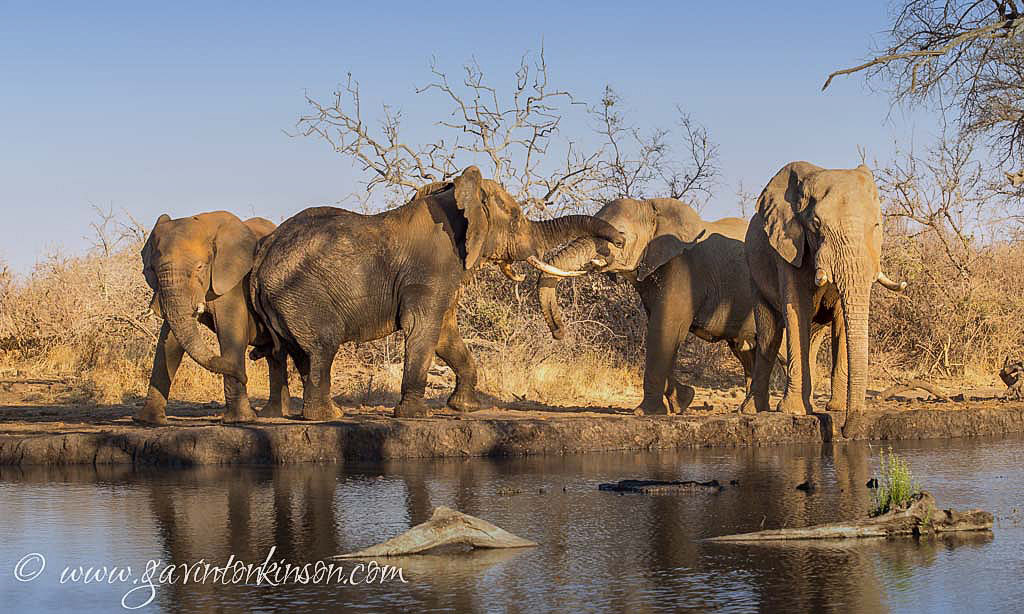 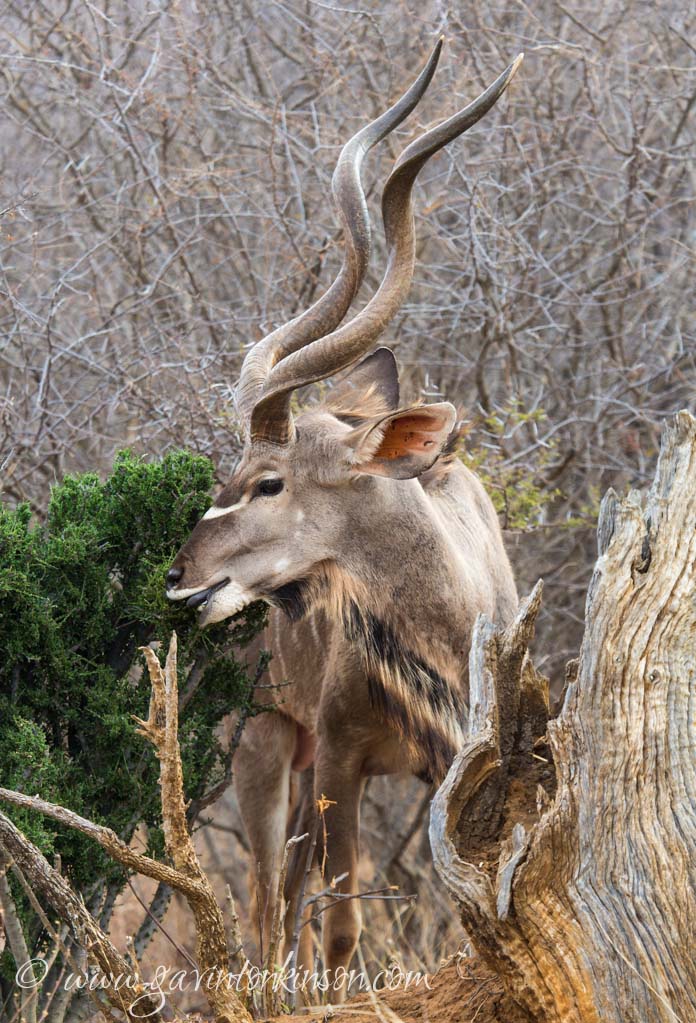 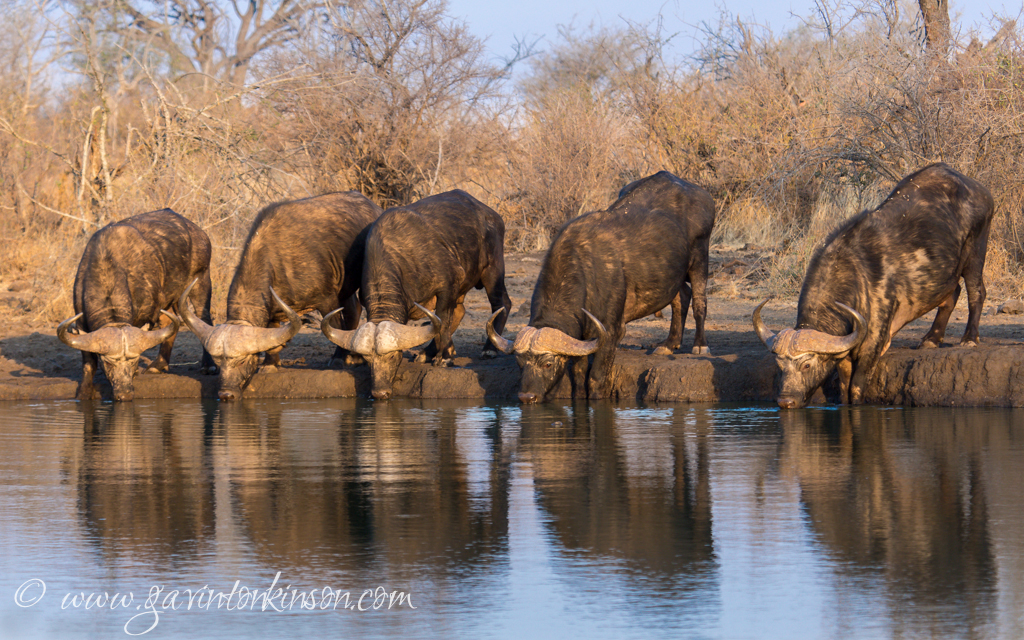 We also had an incredible sighting of a new born elephant, and my guests were blown away by the cute factor of this little guy who was still fighting with his uncooperative feet as his mother and family members formed circles of support around him. So hopefully he will turn out to be one of Africa’s biggest icons. 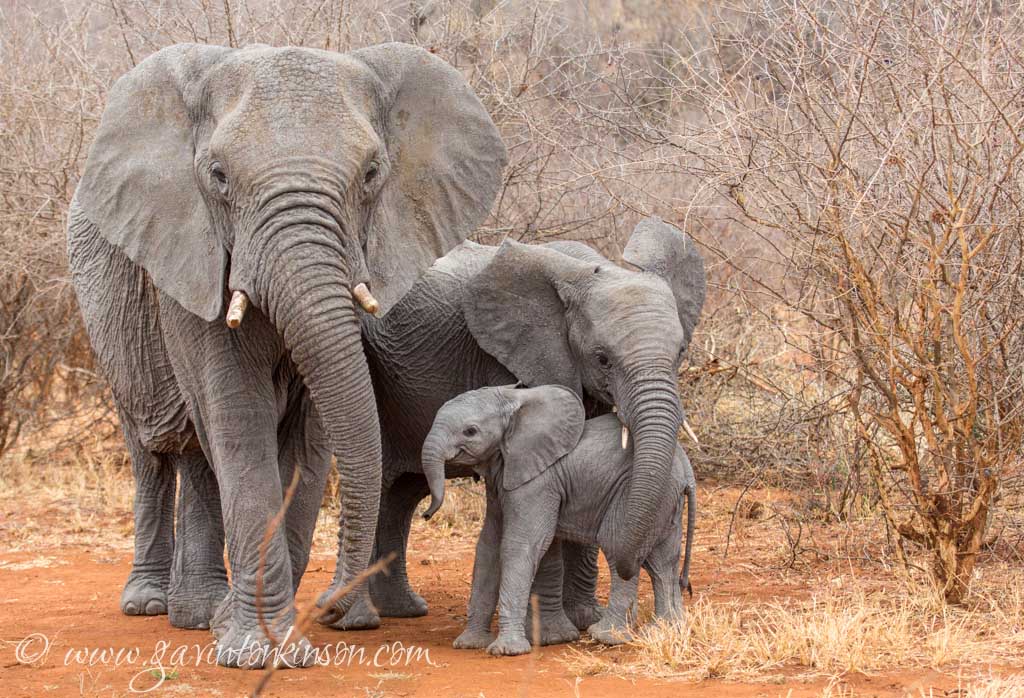 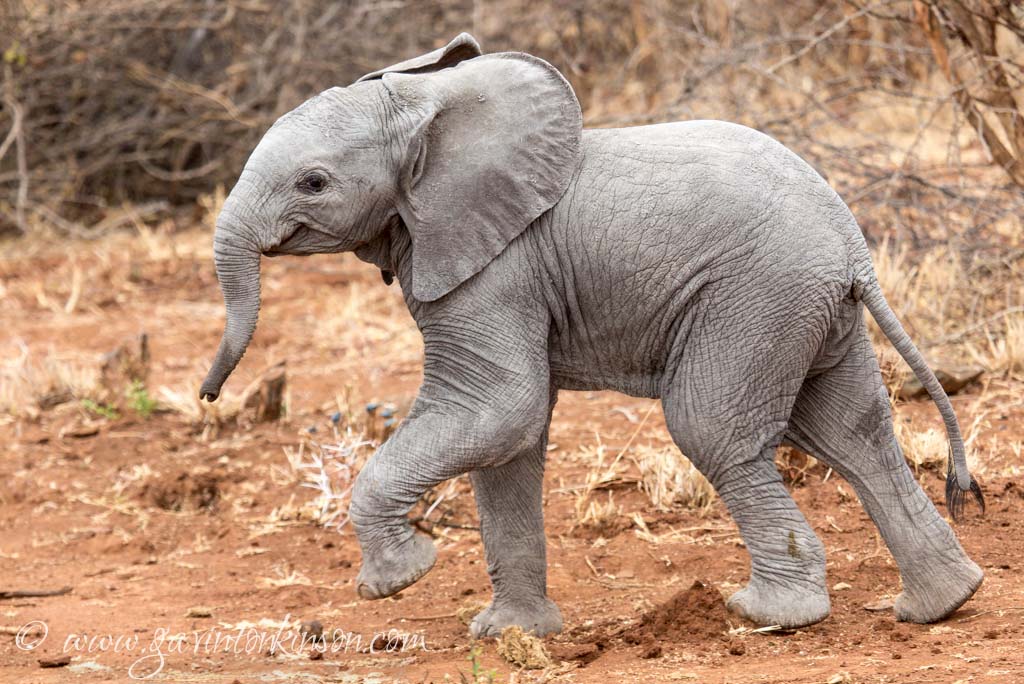 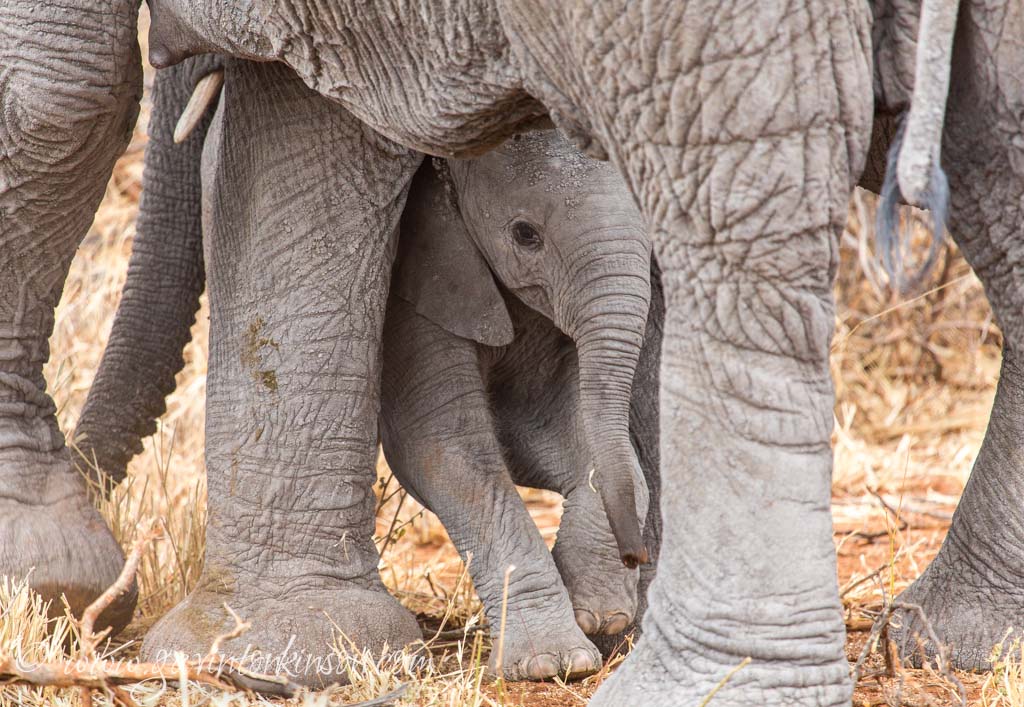 See you soon at Tuningi !!! 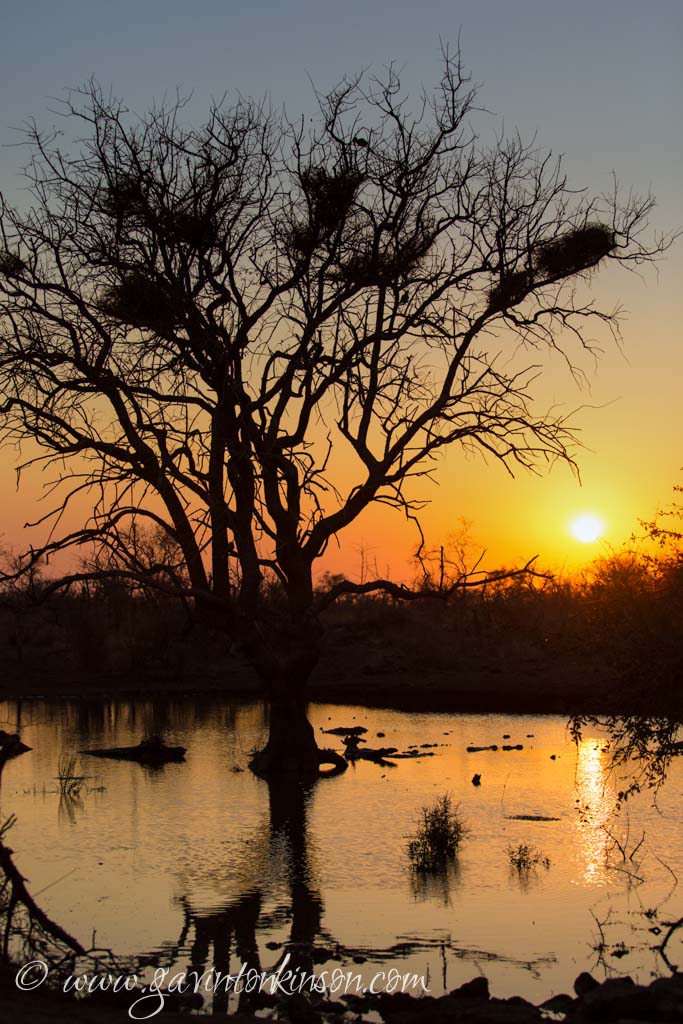