By Tuningi Safari Lodge on September 2, 2014

Wow what an extraordinary month August has been, amazing sightings were abundant, I got to experience a very special sighting for only the second time in 4 years and even the weather is warming up nicely with only the August winds bringing the temperature down every now and again.

Like I said there were so many great sightings this month that it is difficult to choose between the best ones and I would rather wright about all of them, but I would spare you a few days in front of the computer and rather just tell you about a few really, really amazing sightings.

Well technically this was not one sighting we experienced but a whole day of excitement.  I had a group in camp for 6 days and for a bit of change to the routine, I decided to take them out for day drive.  So that morning we got to lay in a bit and only got up to have breakfast at 8 o’clock and bumbled out of the lodge around 9 o’clock, lunch packed and ready for action.  My plan of action during a day drive is usually waterhole hopping, I drive from one waterhole to the next, hoping for the animals to come and quench their thirst during the heat of the day.  The first waterhole we stop by luck was already on our side as we found the 3 Chimbro males sleeping under a Buffalo Thorn tree.  Of course knowing that during the day they would have ample opportunities to hunt as unsuspecting animals came down for a drink.  We also didn’t have to wait long before some impala made their way to the water and one of the males taking an interest in them.  Out in the bush there are very few things that build suspense like lions stalking their pray.  Unfortunately for the lion the terrain was a bit to open and the impala spotted him and bolted before he even got close to them. 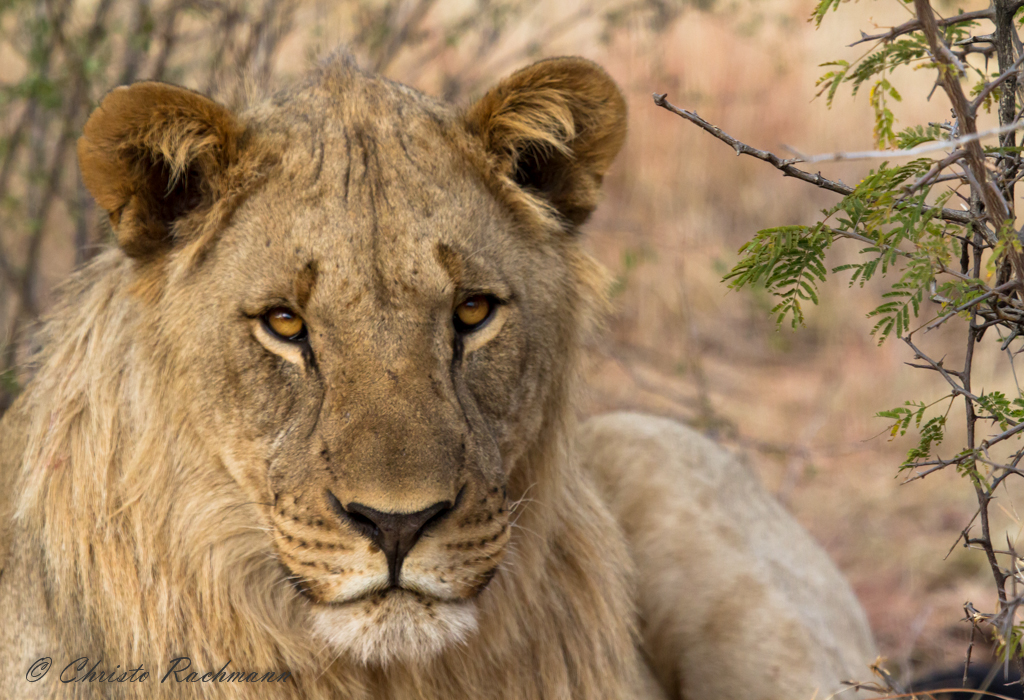 We then headed off to go and find the 4 male cheetahs that were found earlier that morning, and I was hoping they would still be in that area.  Luckily for us they killed a young wildebeest and were still feeding when we found them.  Not long after we arrived they had their fill and left a portion of the wildebeest untouched to go and have a rest in the shade.  This left a hyena that was in the area with a stunned expression on his face as he realized Christmas came early for him and he quickly made off with the leftovers. 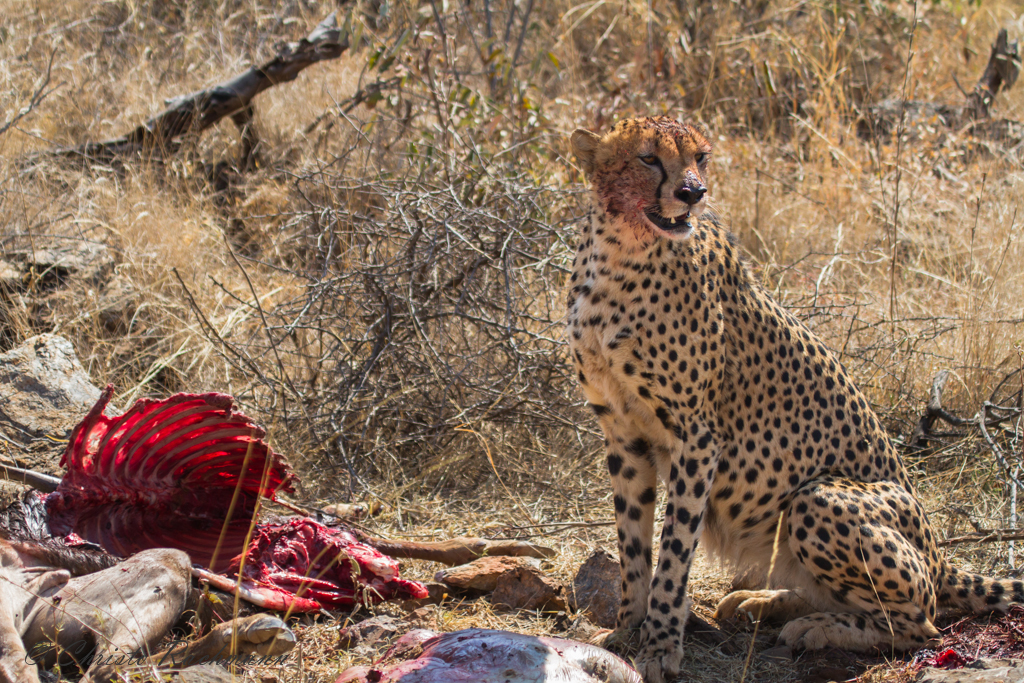 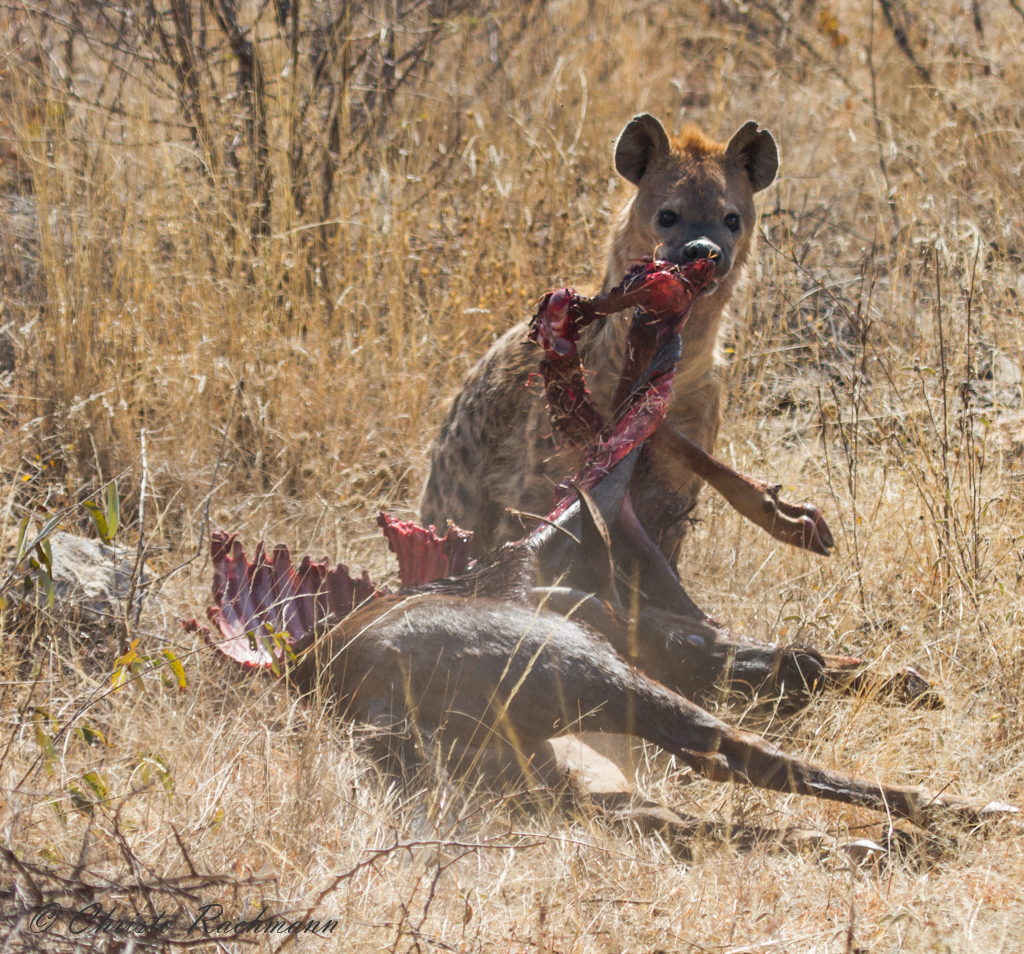 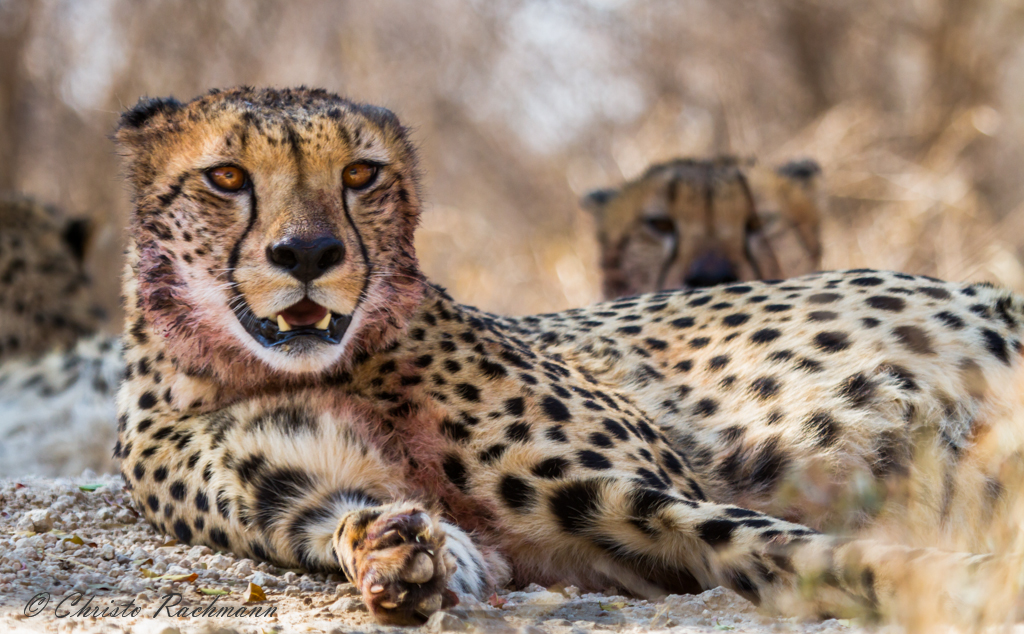 I then set sail for the dark and unknown part of Madikwe, the east.  Legend has it that many a guide from the South has left for the East and gotten so horribly lost that they never again returned.  Again I have a strategy when driving in the East, get lost as quickly as possible so that you have more time to find your way out.  The biggest dilemma of course is if you have to call in a sighting in on the radio in the east, because 99% of the time you don’t know which road you are on, this of course is due to a glitch in the earth’s magnetic field, causing compasses and maps in the east to malfunction, completely.  This particular day drive I don’t just stumble upon an animal, I stumble upon THE animal….. If you ever want to see a Land Cruiser go from 25km/h in a forward momentum to 80km/h in a backward momentum let a guest yell out, “what is that thing in the tree”.  To be honest, a rather interesting experience.  Well there he was in a tree, 10m away from the vehicle sleeping in a tree.  We spent an amazing 30 or 40 minutes with this relaxed leopard and watched as he eventually came down the tree and walked around, before going to bed in some thick bush, a day drive well worth remembering. 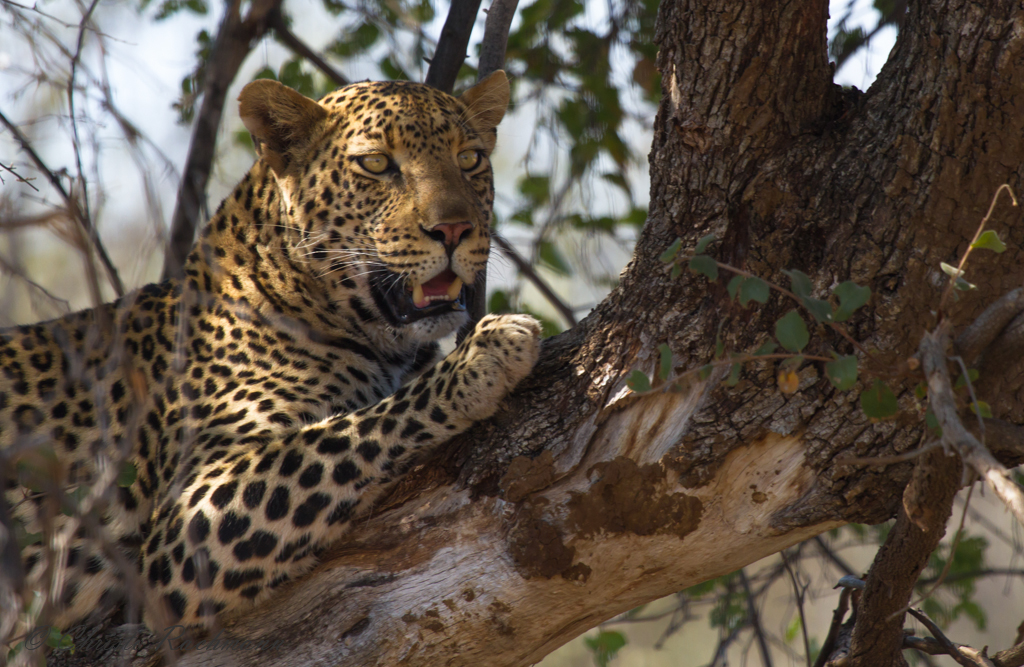 The sighting that stood out well above the other sightings this month is the evening we spent some time with the Mica Jamala females and their cubs of around 2 years.  I joined the sighting just as dusk was setting in, in hope that the lions would give us an African serenade.  All eight big cats were still out for the count but slowly started showing signs of life. Until the one female got up and started walking up the road with the other lions reluctantly following her lead.

We suspected the lions might be on their way to a waterhole a 1km or 2 up the road and decided to follow them as they were leisurely strolling up the road.  A few hundred meters further the lions must have heard or smelt something of interest to the west of them.  They all stopped and listened and you could feel the tension in the air as they were constructing battle plans.  Now one of the great mysteries to me is how does these lions communicate their plans to each other, for it did not take long before the eldest of the females and some of the younger males disappeared into the brush, leaving 2 adult females on the road in front of us crouching low so as to stay out of sight.  We knew the hunt was on and now it was just a matter of time and buckets full of patience.

So there we were, under the African sky, and with every shooting star passing over head, wishing that we would see a kill.  We sat in the dark so as not to interfere with the hunt, with only the occasional flash of the spot light to see if the lionesses were still in front of us on the road.  In one such flash we could see a zebra crossing the road a little bit further up from where the lionesses were on the road and the atmosphere just got a little bit more intense.  After almost an hour of waiting the night silence was shattered by panicked hoof beats, the lions made their move.  No more than ever we could not switch on the light so as not to blind the fleeing zebras.  The eldest female and young males obviously flanked the zebras and were chasing them straight towards the waiting lionesses on the road…and us.  Sitting in darkness hearing hoof beats thundering closer is a rather humbling experience.  The zebras are close to the road and still running, then a whole new chapter of chaos ensues as the two waiting lionesses spring into action, one can hear zebra’s crashing in all direction with a new burst of speed as they come to terms with the lioness’s ambush.  Zebras are thundering across the road 100m or less in front of us.  Just to make sure there are no zebras running towards the car I give a quick flash with the spot light and illuminate 2 lionesses in hot pursuit of a young zebra and heading our way.  Not to disadvantage the zebra on lions I quickly turned off the spot light and a split second later there are shrieks next to the car.  Light back on.  The lions have caught up to the zebra and trying to fight it down a mere 6 or 7 meters from the vehicle.  We watched in awe as the zebra is brought down and quickly dispatched.  The other participants in the hunt quickly join in to try and get their share of the meal.  After a while we call it a night and turn back for home, a little bit speechless, a little bit shocked, but in a lot of awe for the amazing natural scene that just played off in front of us.

With the rains still a distant dream, Tlou dam is as busy as ever and one can almost be guaranteed of amazing sightings of elephants and buffalo at the dam. 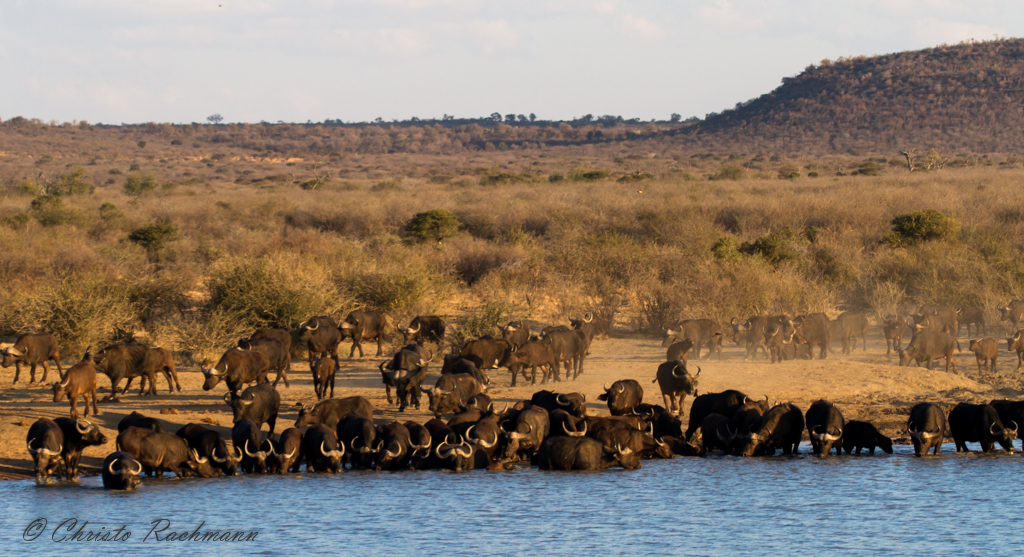 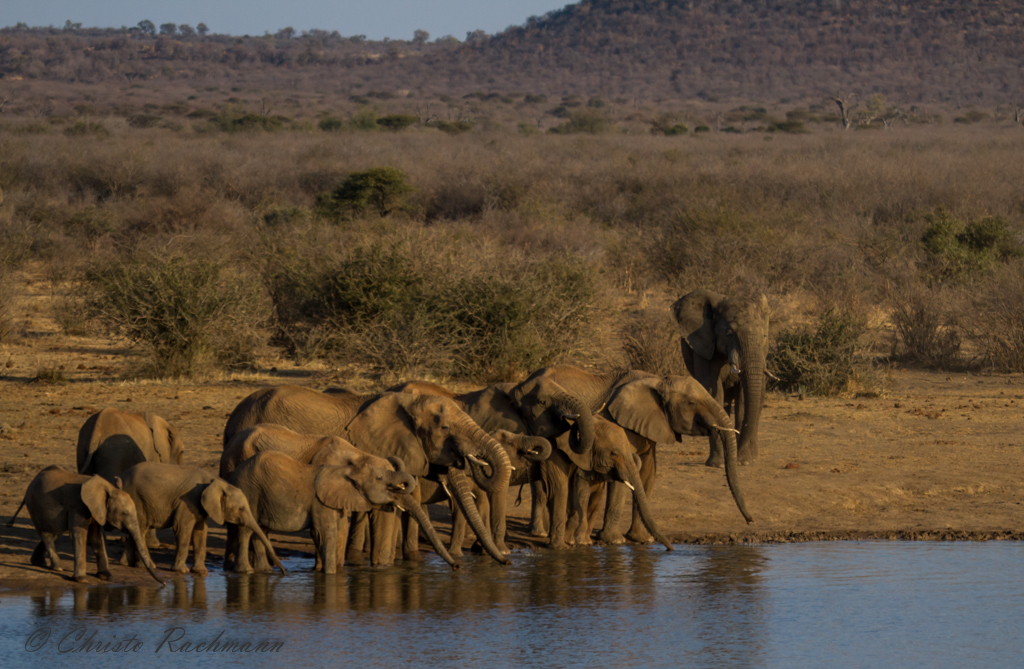 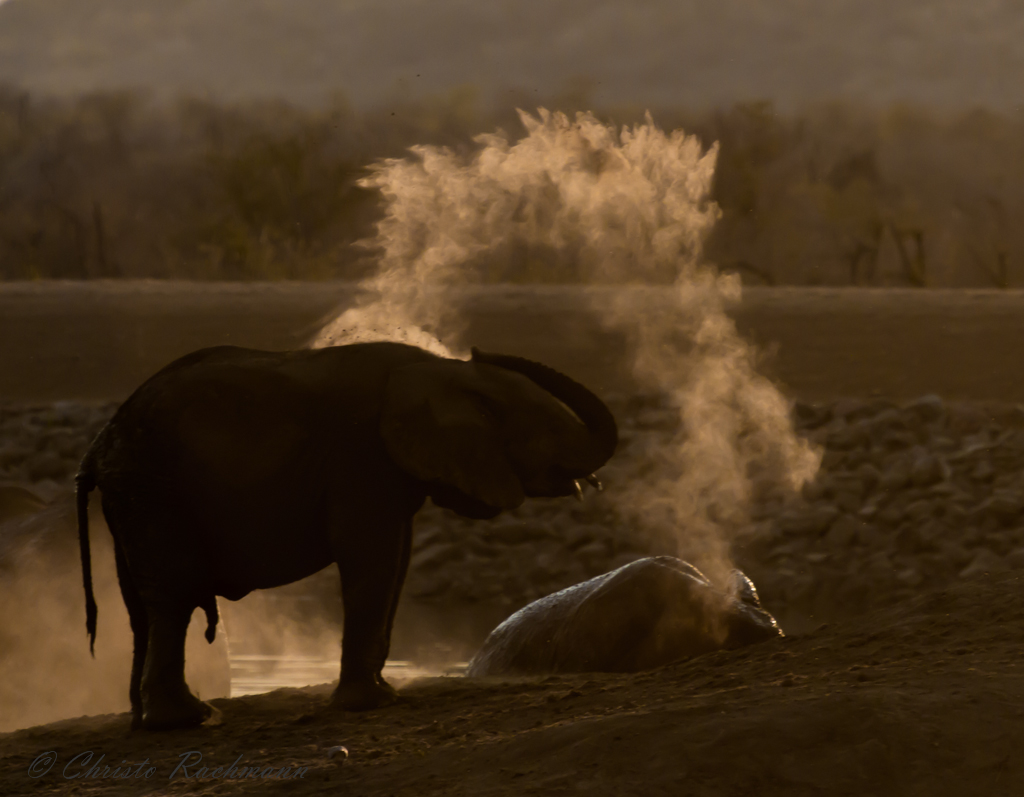 Well folks that is all from us, for this month, I’m sure September would have a lot of great sightings in store for us, so make sure to book yourself a room at Tuningi.

Hope to see you soon.