Warmest greetings to all of you,

We had another fabulous month at Tuningi with a lot of visits from return guests, spectacular boma dinners and amazing sightings.

First of all, it is still very dry in Madikwe and even though the rest of South Africa has had some amazing early rain, here in the west of the country it is still bone dry. But as you’ll see this has accounted for some of the most amazing sightings and even an unbelievable amount of Leopard sightings. 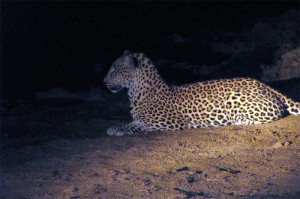 I am not too sure what went on this past month but there were leopards left, right and centre. We totalled an amazing 9 leopard sightings this month, the most that I know off ever. It all started out in the beginning of the month when I was lucky enough to strike a grand slam two evenings in a row. Now a Grand Slam is when one gets the Big 5 all in one drive and it does not happen too often.

Our guests were also treated to 2 leopards at our waterhole one night during a boma dinner, after they’ve also seen a leopard at Tlou Dam walk right past us on the road. This group of guests really had a lot of luck.

There were also a few bizarre leopard sightings. I knew there were lions seen at Vleipan, an amazing waterhole in the South East of the park, so decided to pop in for a quick look. I drove in to the area but only noticed a few White Rhino standing around, so I started searching through the bushes with my spotlight for the refection of eyes from the lions.

Ah bingo, there they are, so off we go to have a look. But as I get to the spot, no lions… OK, I thought I saw one of the cubs and he was moving just around this bush, but now he’s gone, wow fast lion. So I swing the spotlight around to see where the cub went off to. Eyes! Good there he is and I drive a bit closer for a better look. My, my but this cub has lots of spo… oh! And there he was sitting in my light not 10m away from us happily having a look around before starting to make his way to the waterhole. We went to wait for him at the waterhole, but before he could come in to drink, an elephant moved through the bush behind him and we just saw him slinking back into the thickets. 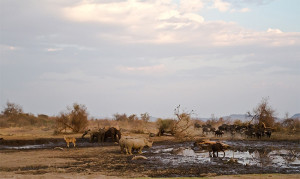 The second bizarre leopard sighting still gives me goose bumps. We were also sitting at Vleipan, that pan is cooking, and decided to make for home. Spotlight on… Spotlight on…. Bugger. Ok not a problem just the globe that blew, check the globe, globe is fine. So now I start preparing the guests for a drive back home with no spotlight. Wait, maybe a loose connection on the wires, no loose connection. Has to be a fuse then, so we take off to go back to the lodge, but I start contacting some of the other guides to beg a fuse, but no one can help. After a bit more driving, with no spotlight and a bit of contemplating I decided to see if there is a spare fuse in the fuse box I can use for the spotlight.

Eureka, I am almost certain I don’t need the wipers to work, not that I have wipers in any case. So as I get the spotlight working again, I can remember a comment that went “We better find something now” and not a 100m down the road a leopard crosses right in front of us and we are able to follow it a few meters into the bush. The thing that makes this so amazing is the timing, had my spotlight not blown a fuse we would have never seen that Leopard, if I did not stop 3 times to try to fix my spotlight we would have missed it. I guess sometimes one should not wonder about these things too much as you might blow a fuse.
P.S We also got to see a Black Rhino a little bit later. 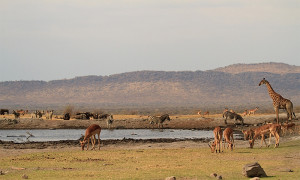 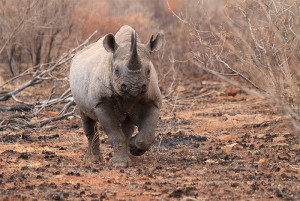 Like I mentioned the Vleipan area is just bustling with wildlife at the moment. Every morning from around 8:30 animals start filling in for a drink and it is breath taking to see between 300 to 400 animals around the pan area, ranging from Impala, Zebra, Wildebeest, Kudu, Red Hartebeest, Ostrich and Giraffe and sometimes even lions.

We spent one morning there with the big pride of lions from the South-East. Herds of animals started coming in to drink. One could just see these lion’s eyes lighting up as they could not believe their luck and we sat in anticipation as some of the females started to stalk some Zebra. It was like seeing a child let loose in a candy factory and he can eat as much as he can get. The only evil twist is that if this poor kid moves the candy is gone. Because of the sheer number of animals and the open land scape the poor lions did not stand a chance and we eventually went do drink coffee and left the lions visibly upset about their predicament.

Well that is all from us for the month of September, hopefully spring would have sprung in the October newsletter which will bring a whole new collection of adventures.