One fabulous day in August, we were privileged enough to experience a project for the conservation of our rhinos, elephants and lions in Madikwe.

A crew for a TV program from Brazil stayed with us at Tuningi, and funded this project, and this is what we did…….

We woke up early to meet all the people necessary to make it all happen, such as the Madikwe park ecologist, the vet and helicopter pilot and got briefed on the procedures of the activities to follow while having a strong cup of coffee and delicious cappuccino muffins. 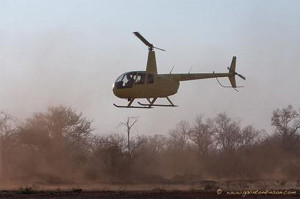 The helicopter then took off in a cloud of dust and was high up above the park to look for a herd of elephants of which we would fit a satellite collar to the matriarch, which would enable us to monitor the movements of this herd to identify which areas they prefer to feed in at which times of the year, and to monitor their seasonal movements around Madikwe.

We were all awaiting the call on the ground via air radio from the vet who had spotted a suitable herd to work on, and then raced in the direction of the hovering helicopter. “ The dart is in” bellowed out on the radio, and we drove closer to the action, when the vet said that there was a young calf which would not leave the matriarch, and he said that he would have to dart and immobilize the little guy too. 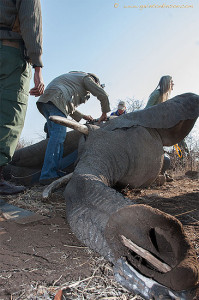 As the drugs started taking full effect on both animals, the vet signaled that it was safe to approach, and we carried the collar, and all the necessary paraphernalia we would need to complete the procedure towards the two sleeping bodies. The first thing that had to be done was to make sure that the elephants were lying on their sides, so that they don’t crush their lungs, and make sure that the trunk was straight and a stick placed inside the tip to ensure that the airway is open for them to breathe, as well as flapping their ears over their eyes to prevent them from drying out.. 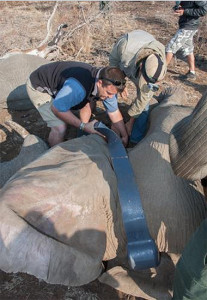 While this was being done, the vet started fitting the collar to the matriarch, while the breathing rate was monitored. Once the collar was fitted the elephants’ details were recorded such as, tusk girth and lengths, shoulder heights etc.

Once all this was complete the reversal drug was given to both elephants, and they woke up within 2 minutes and gathered their feet and moved off slowly, but happily.

The next job in the pipeline was to look for 2 rhinos which did not take too long as the call came from the helicopter 10 minutes later.

The pilot had found 3 rhinos, one big bull, and a female and her calf. The bull was darted first, and was herded by the helicopter pilot to the road where we were waiting for it to become safe for us to get close to this mammoth male white rhino. 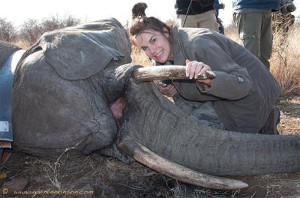 As we arrived at his side, a cloth was put over his eyes, and old rugby socks stuffed into his ears to make him more relaxed, as rhinos are still fully conscious while under the anesthetic. Once this was done Heidi was put in charge of monitoring his breathing rate, so that the vet could see if his condition was deteriorating.

While this was going on, a DNA kit was cracked open, which contains various containers for skin, tissue, horn and toe nail scrapings which was then recorded and put into the sealed containers which would then go for analysis, and put in the national database for future reference. The horn was also fitted with microchips, which in future will help to identify the animal, and these chips were also recorded in the national database.

The ears were also notched or cut in specific places in order to identify the rhino when seen from the ground. The rhino’s horn lengths, girths and shoulder heights were also recorded, before he was given a good dose of antibiotics and vitamins to boost him before he was woken up very quickly with the reversal drug. 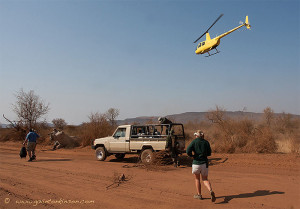 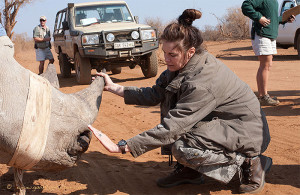 This procedure was the same for the mother and calf, which was darted after the big bull, had disappeared into the bush. 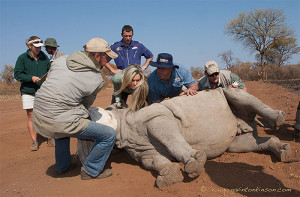 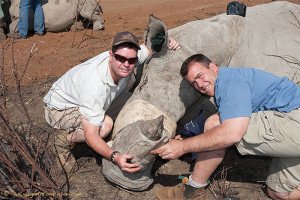 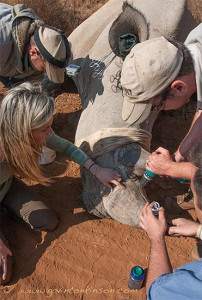 After a cold drink and some high fives, it was into the vehicles and off to find the big pride of 11 lions in the north west of the park, which would be branded for identification purposes. A brand marking is made so that should the lion possibly escape from the park and into neighboring Botswana or cattle farms, it can be positively identified as one of madikwe’s lions for insurance purposes should the lions find themselves a cow or other livestock to eat along the way. It also helps the park to manage the genetic movements of these lions within the park, and can be a very useful tool in the prevention of inbreeding monitoring in the future.

After finding the lions in some very difficult terrain with some serious thorn thickets, 2 lionesses were darted and tranquilized, and after some painful excursions through the thorn trees to extract the lionesses from the bush to work on them, the procedure begun.

Again cloths are put over their eyes, and breathing rates monitored while a fire is made to heat up the branding iron. While this went on the vet gave the lions a good once-over and injected some vitamins and antibiotics. 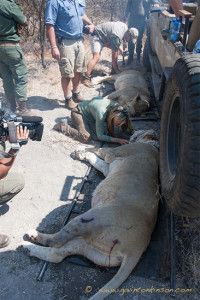 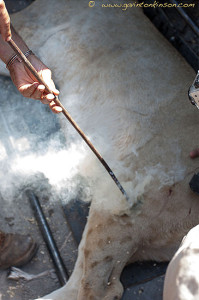 The branding was done and the lions were poured with water to cool them down, before placing them in a safe and shady spot where they would have to work off the effect of the drugs. The drugs used on elephants and rhinos are different to the drugs used for lions, as there is no reversal used for lions. 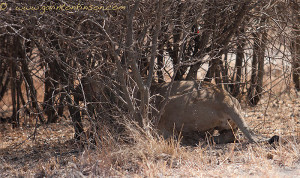 So…..this all happened in one day, and after all the tasks were completed we headed off back to the lodge for some well-deserved lunch and a cold beer.
A big THANK YOU must go to Manuela and her film crew for the kind sponsorship of all the work, which was done, on these animals, and it is without a doubt going to give the researchers and Madikwe park management some vital information needed for the better enrichment of the park.
To Chris from WILDCON, you need a special mention, as you and your company does fantastic work, and your passion for conservation is truly contagious !!
For those of you who would like to get involved with projects like these, please contact us at the lodge to get more information.

Till we chat again!
Keep well and kind regards
Gavin and the rest of the happy T-team