Warmest greetings once again from the African Bush!

At last, Autumn has arrived in all her glory, Leaves are falling on the ground in spectacular colour displays of orange, yellow and red. The early mornings and evenings are freezing cold, while the days are beautifully crisp but nice and comfortably warm. 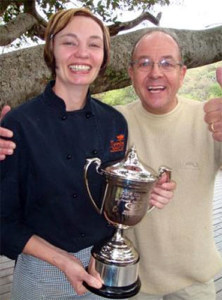 We have had a very exciting month as our Executive chef, Marita Pelser, won the first ‘CHEF OF THE YEAR’ competition launched by Judi Dyason, who trained most of the chefs at the community lodges and Peter Channing, a director of the Madikwe Collection.

All the Collection lodges took part and were judged by Stephen Billingham, President of the South African Chef’s Assosiation as well as the Honorary president, Martin Cobald. Fabulous food was presented, all with a South African theme and Tuningi walked away with the trophy. 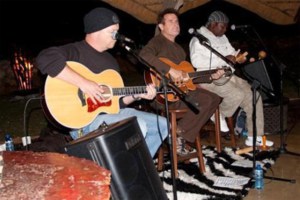 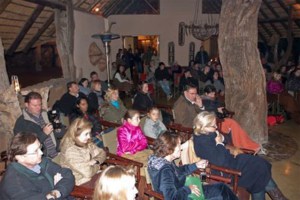 We also hosted the famous ‘White Zulu’ of South Africa this month! Johnny Clegg was here to perform ‘unplugged’ in front of sixty of our guests.

Although the weather threw us a curve ball or two, we never gave up and moved the venue from the bush braai site to the warmth of Tuningi’s Lapa at the last minute. What a huge success! Everybody just loved it and are already begging for another show.
Make sure not to miss something like this again. It truly was an unforgettable experience.

Instead of asking one of the Rangers to tell you about their sightings of the last month, one of our guests was so kind to let me have a look at the journal she wrote during her stay with us.

Here is a small extract from it. I thought you would like to hear about Tuningi from a guests perspective, for a change. Thank you so much to Rona Train, all the way from the US of A !!!

“As the only guests, we were given the prime suite with the best view of the elephant walk. Often photos online are deceiving and the actual accommodation is disappointing. In this instance, the photos did not do justice to the suite. It had a lovely huge bedroom with a king bed artfully draped in mosquito netting, plenty of storage, a stone fireplace opening to both the bedroom and large bathroom, a grand tub (with three rubber duckies), two sinks, and as the website indicated, the shower actually was outdoors but secluded. In fact, Grant told us we were staying in the best facility on Madikwe Reserve, and we began to believe it. After unpacking, we took quick naps and walked the slate stone path to the lodge for lunch. 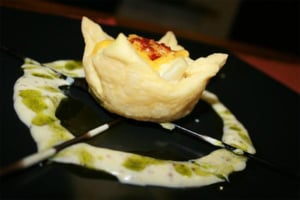 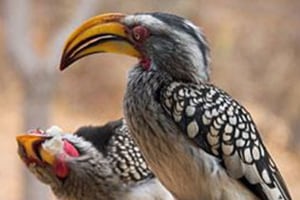 It was the first of the beautifully presented and delicious meals we enjoyed at Tuningi. We had a chance to grab a few more winks before our first safari drive. We learned that the word ‘safariya’ is originally Arabic and describes a voyage or expedition during which discoveries might be made. Our first discovery was a baby puff adder, which Grant picked up by holding it behind the jaw to expose the fangs. This is the most venomous snake in Africa, and because its jaws are not hinged, can ingest rodents much larger than you would imagine. A beautiful yellow hornbill flew to a low branch for us to admire. Since this is not the mating season, both males and females look alike. When the time is right, males develop brilliant plumage to attract the girls.

Grant’s primary quest was for lions. He told us that he had been searching for them for three days, and a previous group had walked their legs to stumps in vain. Walk??? Not us. With the aid of radios, the various trackers could keep in touch and alert each other to their sightings. Lions are one of the few carnivores on the reserve, and will trap and eat anything they can. They look for the largest prey, such as wildebeest or rhinos, but an unlucky impala will do for a tasty snack. Grant showed us lion tracks, and was determined to find the source. 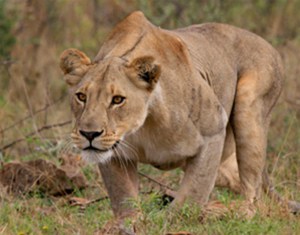 On the trail we spied a striking crimson-breasted shrike (a bird) just passing through. It became apparent that there was an actual road system through the bush. Wide red dirt roads led to narrower dirt roads which led to parallel but easily visible ruts which led to intermittent ruts which led to just plan scrub. And Grant fearlessly and sometimes very quickly drove us through them all in search of awesome sights. 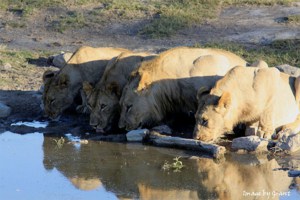 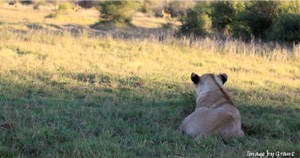 Having confidence that a pride of lions were at a watering hole, Grant introduced us to an“African massage” as we bounced over a very rocky path to our destination. And there they were: 2 moms and their 1-to 2-year-old sons and daughter. The fathers were not in the area. From the swell of their bellies, Grant deduced that they were thirsty and lethargic following a good feed. They drank, they rested, they moseyed around a bit, and we found them fascinating. We had been warned to remain seated if we saw lions, but nothing else about our presence seemed to attract their attention in the least. We saw a large herd of impalas crossing a road in the distance, and wondered if the lions were up for a snack. It was interesting to observe the mother lions take notice of the herd, but they were too far away and the lions were not hungry enough to take action. Lions are powerful but not especially fast, so are cunning hunters who ambush their prey and depend upon surprise for their success. The impalas were not in striking or ambush position, yet we heard the alarm sounded by the impala lookout, warning the others that danger lurked nearby. Being unable to approach the waterhole, the impalas made do by grazing the salt lick. The white salt was visible in the dirt, and Grant told us that the animals also lick the iron from the red dirt. 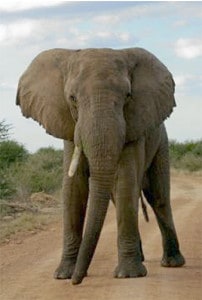 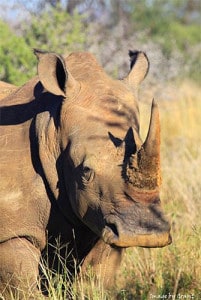 We began our journey home and came upon elephants beginning to cross the road. We stopped to let them pass, watching them strip leaves from branches and gather huge trunkfuls of grass as they progressed. One very mature girl turned and walked right to our van, and I was ready to crawl under the seat for safety, until Grant assured me that to them we were just scenery. Sure enough, she just lumbered past us and kept going. I did note her extremely creased and wrinkled hide, and remarked that this is what happens to those who get too much sun.

As sun was beginning to descend, we re-traversed the rocky massage road and spied a rare sight: a mother white rhinoceros and her child. They were truly prehistoric, and did not choose to wait for us, so we didn’t have a long time to view them. 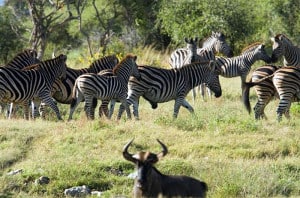 From a distance we caught a quick glimpse of kudus, similar to impalas but with very large ears. And frequently we saw zebra families. They are absolutely beautiful. Their markings are distinctive and unique, with black and also grey striping on white. Many even are beige instead of white across their back and sides. We learned that they identify each other by the unique striping of their rumps, sort of like zebra bar codes. 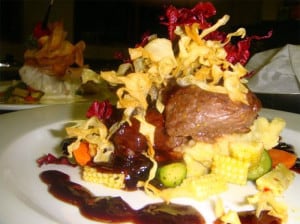 Our afternoon safari had lasted three hours, and by the time we returned it was 6:45 p.m., very cold, and dark. Our body clocks were very confused, and we were grateful to defrost with an alcoholic beverage and a wonderful dinner set in front of the warm fireplace. Following Grant’s recommendation, I chose the ostrich for dinner. It is red meat, mild and not gamey tasting, and very lean. The cherry sauce probably negated the low calorie count.

A very hot bath prepared us for a wonderful night’s rest, and we agreed that the previous 13 hours had been a memorable introduction to South Africa.”
Rona Train

We surely hope you have enjoyed that!
We will be running around all over the place this month as we will be hosting the World Cup Soccer and all the fans coming from all over the world.
Keep well until we chat again
Kind regards
Heidi and the fabulous T-team.