Warmest greetings once again from the African Bush!

We hope that you are well and that you have all had a great mid- year break! In South Africa June was all about the soccer World Cup! Hundreds of thousands of soccer fans arrived in our country in droves and the vibe has just been unbelievable! Most visitors not only found the soccer exciting, but also took some time to discover our beautiful country. Needless to say, we entertained many of them here at Tuningi and as always gave them a chance to experience up close and personal encounters with our fantastic wildlife! 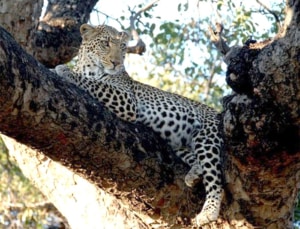 We also introduced them to warm and flawless service, fabulous traditional cuisine, the best of South African wine and as always, ensured an all over unforgettable holiday! In a matter of days, some freezing cold weather changed the lush green vegetation into a dry looking grey and brown landscape. This has noticeably thinned out the bush and made for even better game viewing than we were used to before! It is espessially easier to spot leopard when the bush is less dense and our guests were spoilt with quite a few of these very special treats! 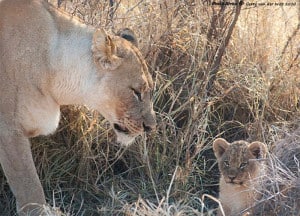 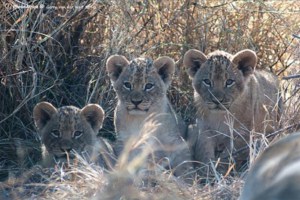 Once again, the Tuningi rangers showed their amazing talents in tracking even the most elusive of animals. This time it was Gavin who found the fluffiest little new born lion cubs hiding in the bush. As with tradition in Madikwe, the ranger who finds new cubs first gets to name them and with all the soccer fever in the air this month they were named after the World Cup soccer ball and are called ‘THE JABULANI CUBS’. They are four weeks old now and we expect to see more of them as their mother gradually starts to allow them to walk around with her as they get a bit older. It is just awesome to see such cute little gems in the wild and something everyone hopes for on every drive.

It seemed as if this great find was a sign of more lion sightings right through the month, so I asked Grant to give you an update on some of the incredible stuff our soccer fans experienced! Over to him, then…. 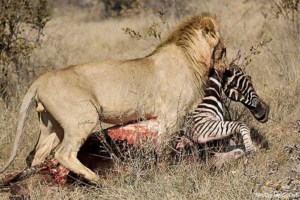 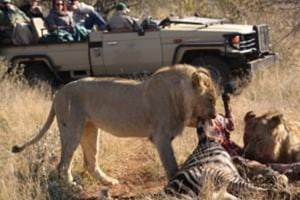 On Tuesday morning we drove for hours before we actually saw something. These days, the winter chill is quite cutting when we leave on safari at 6:30 in the morning. We went out in search of lions . Normally we stand a better chance of finding them in the morning because they are still active and walking around. After our 3 hour drive we decided to go back to the lodge for breakfast. The whole morning we had been following signs of the south western pride but couldn’t locate on them.

Then as we were heading back I spotted some zebra not far from the camp and could see something was unfolding. I switched off the cruiser and could hear the alarm calls of the zebra and the birds. As we drove on slowly I saw the blood-stained face of a male lion in the yellow grass. I then knew we had just missed the kill. We drove in and found the three males busy feeding on the zebra. 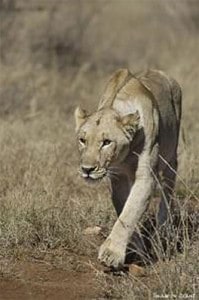 We could see the brothers were extremely hungry so they didn’t even flinched when we drove in. We didn’t stay long and went for breakfast. After breakfast I told my guests that we should go back there. What a sighting we had. As we drove up I counted not 3 but 7 lions hanging around waiting for their own piece of the zebra. The interaction was amazing between the 3 different groups of lions. The Lenyalo males made the kill and then Mutuzi brother and sister with the Muratie males joined in. The Muratie males got a piece of the action because they are a coalition of 2. It was the Mutuzi’s that did not succeed. The young female was not confident enough to take on the males.

After a while one of the Lenyalo males decided to drag the carcass off into cover. That was when the action started. The reason he dragged it away was because the other lions had made a move on his food. 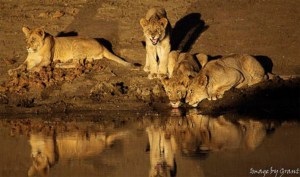 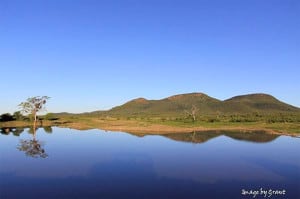 This was really the month of the lion. Our lion sightings were spectacular. It was late afternoon at Tau dam in the south west of Madikwe and we were bathed in golden light. The adults were still sleeping at the back of the dam so the youngsters decided to come and amuse themselves at the edge of the water. These are the Maropeng youngsters and they have grown quite a bit. They are 9 months old now. From a lion’s point we did not do too badly.

The picture below is Thlou dam in the north. For the winter it doesn’t look too bad. We had very late rainfall this year and this is the result. Well this is me for now. Come and join us on Facebook and Twitter for regular updates on our safaris in Madikwe.

Till next time!
Grant

Well, as you can see, there is never a dull moment here at Tuningi!
Come and visit us soon! We guarantee that you will have an unforgettable holiday!
Until next month!
Warmest regards
The T-team