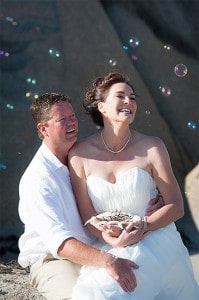 Warmest greetings to all of you once again from the lovely Madikwe Game Reserve.

As most of you already know, the biggest news from our side this month is that Gavin and I got married on 31 March! After 10 years of being together, of which the last 7 happiest ones have been here at Tuningi, we finally did it!

The intimate ceremony was held on a remote beach in a little fishing village on the West Coast of SA, called Paternoster. We had the reception dinner in a fabulous, cozy little restaurant called the NOISY OYSTER.

It was truly the happiest day of our lives. 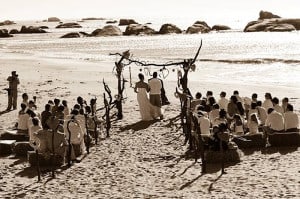 We would like to say thank you to all of you for getting excited with us while we were planning it all and for all the good wishes, enthusiastic phone calls and lovely sms’s you sent on the big day.

We met so many of you here at Tuningi as guests and with your return visits have became such good friends! It meant so much to us that you were all there with us in spirit. Here with a few photos for all of you who asked! 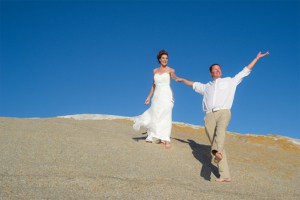 Please come back soon as we can’t wait to see you all again!
Kindest regards
Heidi

P.S. Don’t worry, I have not forgotten to let you know about all the excitement back in the bush either!

Cornelius has it covered!

Yet another month has passed and as always it was full 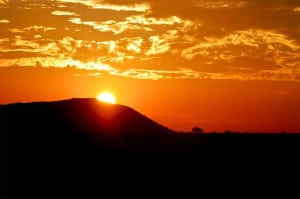 The season is changing quickly now with everything being dry. The cool evening game drives end with spectacular sunsets in the dusty air.

The 2 resident male lions woke us one morning with their powerful roars very close to the lodge. They were on a patrol of their territory, which consists of a big portion in the west of Madikwe. 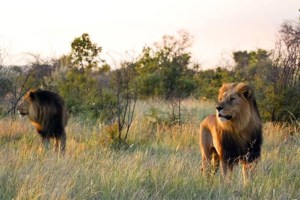 The best build up of excitement was also thanks to the male lions. Late one afternoon we found some lion tracks middle west of the park on a dusty road; by the size of the tracks we knew it was males. It lead us into a big open grassy area where we lost the tracks. After a few minutes of looking around I spotted that massive head in the grass. As we approached the excitement grew … we saw blood.

They were feeding on a female buffalo. It was a female that got separated from the herd while giving birth. The 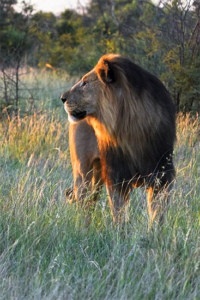 lions were in the area at the right time. This provided a busy sighting for everyone in the area. Buffalo are not killed often in Madikwe.

We as guides, at times, might be spoiled with sightings and just want more and more.

Something very special I saw recently was a zebra giving birth.

I was close to the airstrip with lots of zebras around us. I saw this one behind some trees making a huge pee… “its not a pee, her water broke“ someone shouted as we saw a leg of the calf coming out. She walked a short distance and lay down in the tall grass. I drove closer slowly not wanting to disturb her more. Some other guides joined me and we waited. About 5 minutes later the female got up and started licking the little one. It was obviously getting use to the light and very new surroundings, as it was shaking its head. The female was 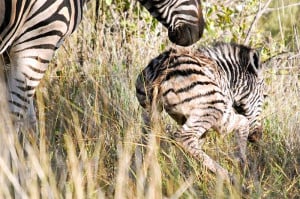 desperately trying to get it on its feet and walked off for short distances.

After a few failed attempts it got to its feet and was determined not to fall again. By this time we were all relieved and excited to see him standing. I was sitting with the guests at the back of the vehicle trying to get a photo of this very rare scene.

The now very nervous mother walked further away. The newborn quickly got the hint and with stiff legs gave its 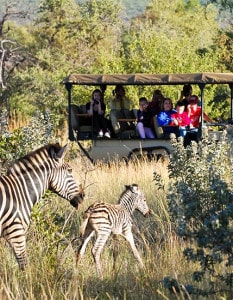 first few steps. It quickly got use to the legs and feet and followed its proud mother. After they had left we went and and had a look at the afterbirth.

No wonder the female wanted to get out of there with that lying around. The smell of blood could attract predators and scavengers.

Never a dull moment in this place! That’s for sure!

For now that’s all. Visit us at Tuningi soon and come and share in all the excitement!
Also befriend us on Face Book for loads more photos and daily updates! 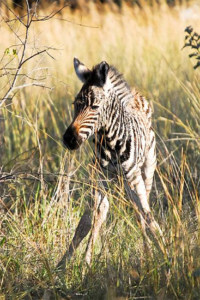 Cornelius and the rest of the T-team. 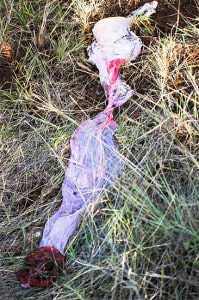