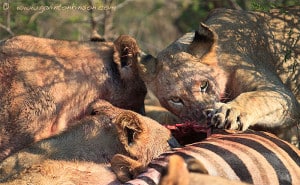 Warmest greetings to all of you once again!

All of a sudden the leaves are turning brown and orange! The crispness in the air and the crunching sound under your feet when walking around confirms that it is Autumn at last!

At least we all acquired a brand new, snug little layer of fat to keep us warm, due to all the Easter eggs that was devoured in the beginning of the month! 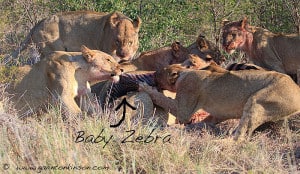 What fun we had once again with so many of you visiting Tuningi for the second or even third time this month! We just loved to see you again! We have also welcomed all the first time visitors into our family and are already waiting for your return!

This month Gavin tells you about all the excitement out there in the bush on the game drive: 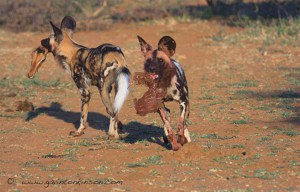 Jeepers !! Where did the first ¼ of the year go? Time flies when you are having fun!!!
Ok….so I’m sure you can’t wait to hear about the buzz in the bush. Here goes….

Lets start off with a bang.
One morning we were tracking lions…the Tchaba Pride from the north west of the park. While giving us some serious lessons in hide and seek, I suddenly found some extremely fresh tracks of them over my vehicle tracks. We had been in the same spot only 30 minutes before. 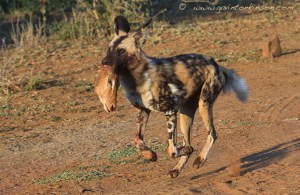 So after some more tracking, we eventually just found one of the females who was looking somewhat flustered. We followed her for about 10 minutes and she led us to a freshly killed zebra, which had just been opened up. However there were no signs of the 8 sub-adults. Then she started to call them, and if any of you have ever heard this, you would think that she was whispering, as the sound obviously travels a lot further than we think. The next thing, we spotted the cubs in the distant long grass plain, and they were bouncing up and down with great excitement with the scent of fresh 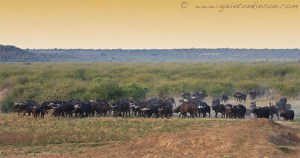 As they got closer their excitement escalated into a feeding frenzy, as they ripped and tore the zebra with some serious intent.

After some time, the sounds at the carcass got louder and louder, when all of a sudden two lions were fighting over something they were pulling out of the inside of 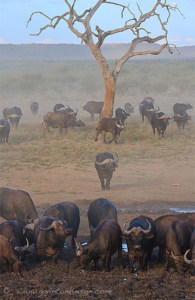 the carcass…….a baby zebra !! It may sound rather crass, but this is what happens in nature on a daily basis, as the fight for survival is real, and is best respected for what it is. I am sure that Dave and Angela Workman Jnr, and Art and Donna Zimmerly will never forget this sight in a hurry.

Every guest staying with us, always wants to see a kill, as this is something that re-awakens a prehistoric force within us, and to come and see nature doing it on a daily basis is an awesome privilege.

Again we were looking for lion tracks one chilly morning, this time for the 2 big Dominant males Kgala and Etali, and after 10 minutes of tracking with no result, I returned to the vehicle with guests shouting at me…. “ They made a kill !!”. WHAT !! 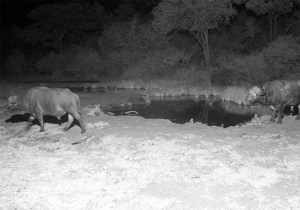 killed an impala right in front of my guests. I quickly jumped back on and we enjoyed the sights and sounds that only the most efficient predator can make.

Its difficult to express to you the emotions that you feel while witnessing these scenes, but it is after all why people come to Tuningi ……oh, and don’t mention the great food, accommodation, views, busy waterhole….dinner under the stars, and…..more !!

Buffalo sightings in the park are also amazing, as they 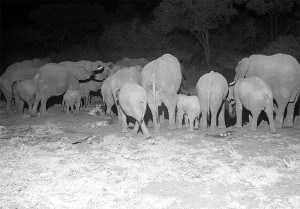 run towards the water in their hundreds, and create some awesome scenes as the dust settles, allowing you to make some great moody images.

I also have some good news….the alpha females of both packs of Wild Dogs are pregnant and are running around the whole park in search of a new den site for the year. So make a booking soon, to come and see the youngsters when they pop out of the dens towards the end of June and early July…….you don’t want to miss this one. 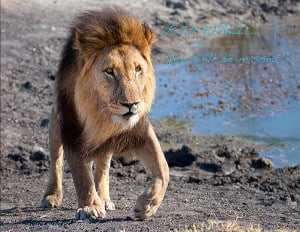 There will also be a photographic workshops held at Tuningi with Deon De Villiers, all aiming at spending some time with the Wild Dogs, and with some great photographic tuition to add to a great time while you stay in the comfort of the amazing Tuningi lodge. (for more info contact us or contact Deon directly at www.safagraphics.com)

The waterhole has also been cooking at the lodge with massive herds of elephant and buffalos visiting almost every day. Our resident brown hyena “Spooky” has also been making regular appearances while we barbeque under the fig tree.

To end off this month’s newsletter I also have some sad news. One of our pride male lions, the Etali male has been killed in a skirmish with buffalo last week, and he will be sorely missed. However this also opens up some interesting interactions which will soon be taking place, as new stronger males will be moving in to challenge the solitary Kgala male who has been reigning in this area for about 5 years now……RIP ETALI.

Anyway…..hope you enjoyed the stories from the bush this month…..
Bush greetings, until we chat again!
Gavin Tonkinson and the fabulous T-team (follow me on twitter or facebook)