Warmest greetings to you all once again!

Here at Tuningi, we are constantly teaching our guests to look past the tip of the finger. If the sight of the blue skies start filling you with joy, if a blade of grass springing up in the bush suddenly has the power to move you, if you find the air exhilarating, if an animal is killed right in front of your eyes and you actually get to understand the reason and live the moment even if the violence upsets you, then you must rejoice, for your soul is finally alive!

What a wonderful month we have had! The game viewing has been so awesome, with all kinds of exciting and rare sightings been recorded by our rangers, that I decided to ask Gavin to tell you all about it in his own words! 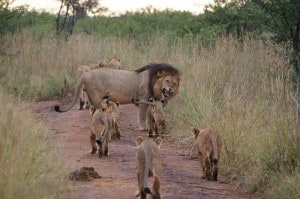 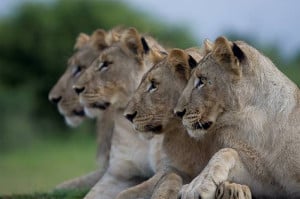 Firstly, the lions…..
Well the Tshabalala females and their now 5 month old youngsters are getting on extremely well, and are growing bigger, and bigger as they have just been weaned off of their mother’s protein rich milk, and are now subsisting on fresh meat.

The Tshabalala’s are finding wildebeest completely irresistible at the moment, as we witnessed at the beginning of the month….. It was a windless evening with all but the night jars’ soothing calls in the distance, when we located the two lionesses in full stalk mode and as I swung the spotlight to the north I noticed a big herd of wildebeest grazing happily in the long green grass unaware that their biggest foe was about to make an incursion into their tight knit circle. We were observing their sleek body lines as they weaved in between the bushes downwind of the wildebeest, when suddenly from nowhere the wildebeest scattered in all directions with one of the females in hot pursuit of the lagging wildebeest caught totally by surprise. The dust eventually subsided with no visual of the lionesses or the wildebeest when a loud bellowing noise erupted out of the bushes to my south. I quickly turned my spotlight in that direction and there she was hanging tightly on to the throat as the struggling wildebeest finally succumbed to the brute force of one of the strongest predators in the world.

The guests with me at the time were so fixated on what they had just seen that they were completely speechless for about ten minutes after the wildebeest had died as I reassured them that the “ death of one, is the life of another”. The lionesses then suddenly stood up and presumably went to fetch the cubs. The next morning the carcass was empty with only a hyena and a jackal finishing off the scraps. This pride has killed no less than 6 wildebeest this month with two in one go on one occasion. So if the females keep going at this rate the cubs seem to have the survival odds stacked in their favor.

The prides from the north west and east of the park are also doing very well and they have been seen mating last week, so in three months time, we may have new bundles of fur running around !! 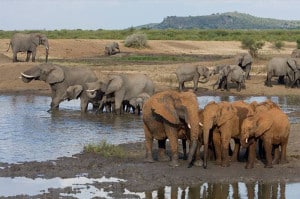 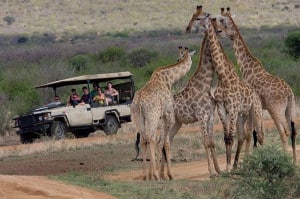 Sitting at the waterholes in the park have given us many awesome sightings of the big herds of buffalo, elephant, zebra, wildebeest and rhino which make their appearance at the waterholes on a daily basis. The elephants and rhinos especially love the mud baths on the hot afternoons which help them beat the heat of the afternoon sun as well as ridding them of the parasites which reside on their pacciderm skins.

Large journeys of giraffe have also been a big bonus as you are driving around the park looking for the elusive leopard; they have a sense of calm about them as they stroll around in search of some juicy acacia trees to nibble on. Two giraffe were also killed by three young male lions and the Mica pride from the east giving amazing interactions between the brown and spotted hyenas fighting each other off for the remains of the carcasses. 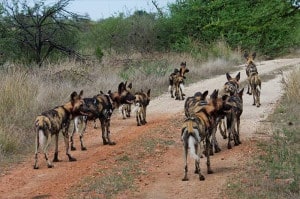 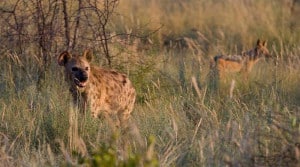 As far as the wild dogs go, things couldn’t get better!!
The Dwarsberg pack (14 dogs) have been terrorizing the impala populations in the park, killing and devouring the antelope on many occasions in full view of our lucky guests who were brave enough to get up on these now chilly mornings.

On one occasion at Vlei pan, we were following the Collection Pack of 6 dogs for about 20 minutes observing their stealth and speed as they charged after a herd of impala when they disappeared in a northerly direction. We then decided to go for a sundowner in one of the open clearings and just as everybody started sipping on their gin and tonics and enjoying the variety of snacks on offer, one of the guests who went behind a bush to “mark her territory” came running back towards us with a rather bewildered look on her face shouting “ HYENA……HYENA…. !!!” 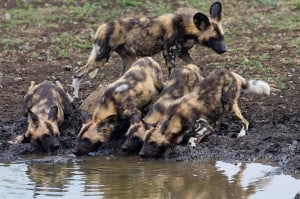 We all looked back at her with great amusement, only to see a wild dog chasing an impala at high speed right passed our drinks table, with the rest of the pack in hot pursuit.

So we ordered the guests to jump into the vehicle and leaving our table, drinks, snacks and all to follow the dogs. The wild dogs ended up chasing the hapless impala into a waterhole with only its head sticking above the water. The dogs were all running around the water’s edge with great excitement trying to reach their prize.

Well…… it wasn’t long after that, when one of the dogs jumped into the water towards the impala and grabbed it by the throat and unceremoniously dragged it to dry land when 6 hungry wild dogs ripped it apart in spectacular fashion. Five minutes later there was only a few bones remaining.

All the excitement and giggling noises the dogs made drew the attention of none other than…. THE MICA PRIDE!!!

Yip, now the dogs themselves were in grave danger as the lions started stalking the dogs that were blissfully unaware of the impending danger. It was just about dark now, and the lions would have the upper hand with the deteriorating light conditions. The lions were now only 30 meters away from the dogs and creeping ever closer when a loud bark echoed into the cool night air….. Lions charged……dogs fleeing everywhere!!! 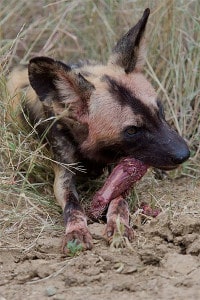 Luckily, all the dogs managed to escape the lion attack and the situation was neutralized leaving the lions to sniff around the scene of the crime to find not much but a few bones. This was one of the most amazing moments we have ever witnessed in the bush. Anyway, we returned to our sundowner tables to reflect on what we had just seen. 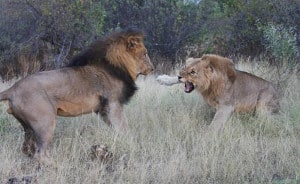 That was not the end of the wild dog sightings, as we were once again following the Collection pack around one morning relentlessly searching for a meal when we heard the high pitched giggling sounds of what could have only been the Dwarsberg Pack. The Collection pack froze dead in their tracks with ears outstretched in the direction of the noise.

Suddenly they all took off towards the raucous with us hot on their heels only to find the Dwarsberg pack ripping an impala to pieces. What happened next was a colossal clash between the two packs of dogs of which neither me or Grant had seen in our ten years of guiding. There were dogs everywhere, chasing each other at high speed around the vehicles and screeching and howling at each other as they obviously were not enjoying each other’s company. Words cannot describe to you all what we witnessed that day but it lasted about 25 minutes before we lost the visual of them moving south away from us.

To close on the wild dogs, the Alpha males and females from both packs have been seen mating at the beginning of the month so in about two months or so they will be giving birth to anything between 5 and 10 new born pups, which will boost the population of what is the rarest carnivore in Africa at the moment!! 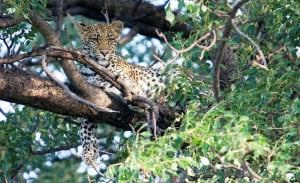 Anyway….. to round off a great month of game viewing the leopard sightings in the park have been getting better as well with the very relaxed female from the south making her appearance on several occasions not far from the lodge and if you are lucky enough to see her she is the ultimate pinnacle of every safari.

So……. Make your reservation!!! Come to Tuningi and you too can be witness to all the ongoing saga and drama of the African Bush ……………………
Kindest regards to all of you,
Until we chat again.
Gavin. 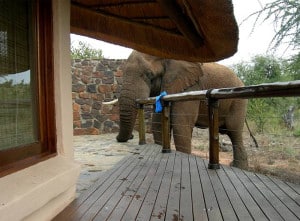 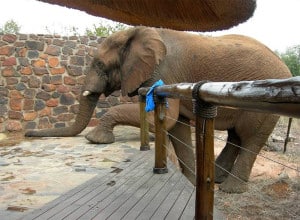 On a completely different note! Lord Madikwe, as we love to call him, came for yet another visit to Tuningi.