Greetings to all of you once again from the African Bush!

We hope that you had a wonderful, romantic Valentine’s month! At Tuningi our guests were spoilt with romantic bubble baths complete with floating rose petals, more than enough bubbly on ice, and of course, dinner to die for!

Although everybody just loves the special touches in the Lodge itself, it is still the Game viewing that gets the adrenaline going! The number and variety of large and small animals on view in the open in Madikwe (as well as some other parks in Africa) are unrivalled by the rest of the world. To be in the middle of an African landscape teeming with wildlife is an unforgettable experience, further enriched by the realization that humankind evolved in just such a setting. But to fully appreciate what you see on safari, you need to know the animals that make Africa unique. Learning to recognize the species is just the first small step. Our highly qualified rangers tell the fascinating stories of each of these animals, so that our guests have the means to understand their behavior. The more you learn, the more fulfilling your safari will be: and the more you will understand why we need to safeguard the survival of African wildlife for generations to come! 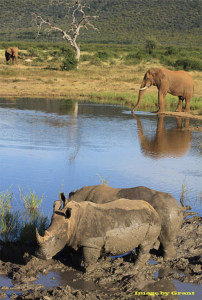 With 155mm of rain in January, the bush is still looking fabulous and lush and all the dams are full to the brim. On some days we can just sit at Tlou dam for hours and watch the animals come and go as they go about their daily business. Some days we could see at least three of the big five all at once!

As every month before, we also had some extremely exciting game drives again this February. One morning, we were following the large pack of rare wild dogs and could clearly see that they were on the hunt. We followed them for a while until we bumped into another game drive vehicle also trying to get a glimpse of them. 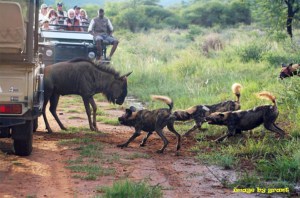 As we were watching, a few of the dogs came rushing around a corner, chasing a wildebeest straight into the vehicle! To our surprise, they were using the vehicle to assist them in their hunt. The wildebeest was too fast, however and made his escape, only to have more dogs following in hot pursuit.

All this happened so fast that we could not keep up with the chase in the vehicles. Minutes later, we bumped into chaos though…. They have managed to chase the poor wildebeest into the corner fence of the park, this time with no chance of escape! 14 dogs were all trying to share in the feast. It took less than ten minutes for them to finish off the kill and move on looking for their next target. 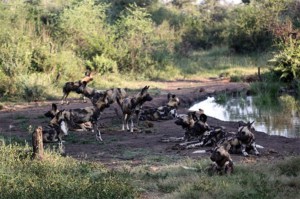 On another day, we also had the whole pack of wild dogs hanging around at the lodge’s private water hole. They all must have had enough to eat the previous day, as they arrived at Tuningi early in the morning and spent the entire day lying around the water hole, relaxing and gathering their strength. How nice, to lie by the swimming pool with a cocktail in hand, blissfully watching one of Africa’s rarest species….

On another occasion, we arrived at a kill of a few days old. 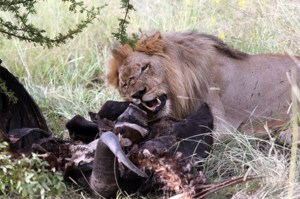 One of the huge male lions in the park, Tsholo, had killed a buffalo and her baby all in one go. This is quite an amazing feat, for one lion on his own, as they usually rely on the female lions to help them with the kill. He ate himself into a stupor and then made way for his brother, Mateya, to come and share in the feast. 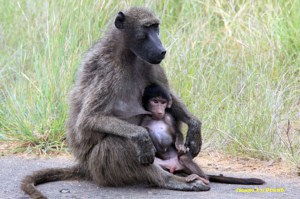 Some of the most interesting animals to watch in the wild are most definitely the baboons.They have so much character and can sometimes just behave in the funniest ways! This creates some fabulous photo opportunities! We found this little baby abusing his mother in such a relaxed manner that she did not even mind! Baboon mothers keep their babies close to them for up to six months. You often see the very small ones clinging onto their mom’s tummies or the older ones jockey riding on their backs. They will play around in

little kiddies groups, but as soon as the mother calls they will hop back into the safety of her arms. 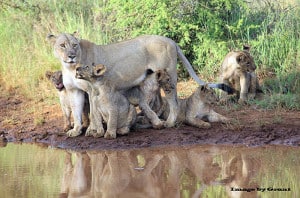 The Chabalala lion sisters were also seen on a few occasions.We are so happy that all five of the babies they had between the two of them are still doing well. They are now five months old. In lion families, you are very lucky if your sister falls pregnant at more or less the same time as you; because you can then fend for your babies as a team, and one day have a nice big family pride!

I end this month’s letter with a beautiful poem by Emily Dibb :

When you’ve acquired a taste for dust
The scent of our first rain,
You’re hooked for life on Africa
And you’ll not be right again
Till you can watch the setting moon
And hear the jackals bark
And know that they’re around you,
Waiting in the dark.

When you long to see the Elephants,
Or to hear the coucal’s song,
When the moonrise sets your blood on fire,
You’ve been away too long.
It’s time to cut the traces loose
And let your heart go free
Beyond that horizon
Where your spirit yearns to be.

What more can I say??
Make that booking, and come and visit us! The Easter holidays are around the corner!
Until we chat again
Warmest regards
The T-team!