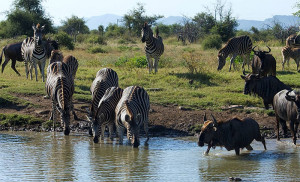 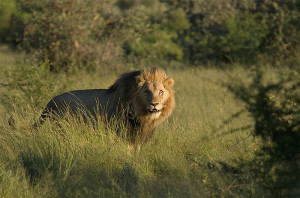 Warmest Greetings to you all once again.

We just can’t believe that a quarter of the new year has already slipped by without us even consciously noticing. Here where we live in the bush, it seems as if we are just floating from one week to the next. The silence is intoxicating and the background music provided by the birds and the insects buzzing about calms you down the instant you arrive at the lodge. Now and then a flash of lightning or a crash of thunder grabs your attention for a minute, just to let you peacefully slip back into your previous state of contentment again. 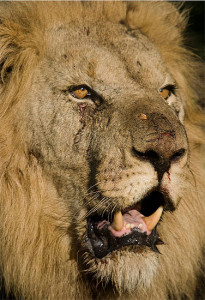 Luckily, here at Tuningi, we are all for some excitement during each day as well. Enter, the two game drives you get to go on each day……

With the two oldest lions in the park (the Batia brothers) now both dead, the two gorgeous Tholo-Mateya males have taken over most of their territory, treating us with their presence near the Lodge, often! 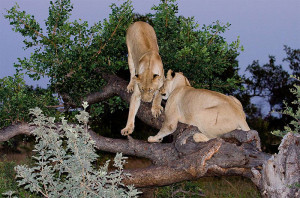 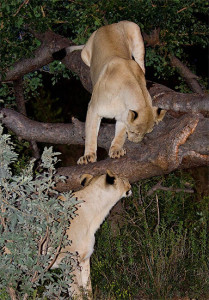 On the last day of the month, our rangers found the Dipelo and Shabalala females playing with each other in a TREE! This is an extremely unusual thing to see, and unfortunately none of the other lodges would respond to us calling them to the sighting as they all thought we were playing the (April) fool with them!

This month, we asked Grant to tell us about Etali’s new babies in his own words. 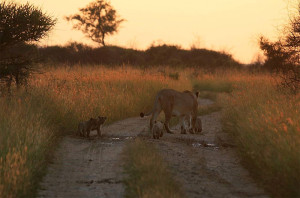 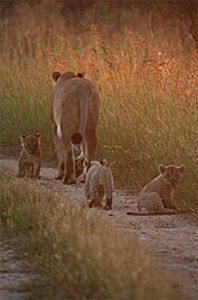 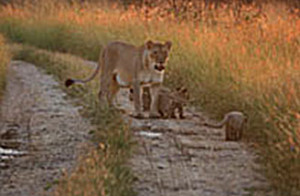 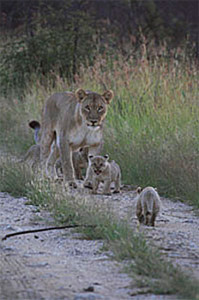 This was probably the highlight of the year so far for me. On the afternoon of the 13th of March 2009 we stumbled upon a couple of lions in the road close to Tau Game lodge. It was the Etali female with her brand new 2009 models. There were 4 cubs. It was the second time I had seen them in that area. We estimated that they were only a few weeks old. What a great privilege it is to spend time with these small lions. Mom was very patient with us, but every now and again we would get a snarl from her just to let us know to keep our distance.

This is now her third litter of cubs. She is an awesome mother and provides for the youngsters all on her own; she has never been part of a pride. When she gives birth she goes into isolation and keeps the cubs in hiding. During these weeks they are very vulnerable to predation especially by hyenas and other lions.

When they are about ten weeks old the female will introduce them to the rest of the pride, but in this case the female is alone so does do this. She has two other youngsters from 2007 and they will surely meet the new cubs. When females are in estrus the female and male will go into isolation for between 2-5 days where they will copulate 2-4 times per hour during that period……a very long honeymoon. During that time they don’t really hunt or eat. They have only one thing on their mind and that is making babies. The gestation period is 110 days and they will have 2-4 but up to 6 cubs have been recorded. 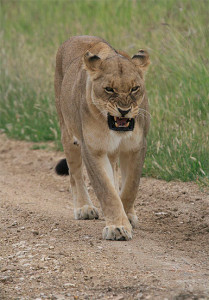 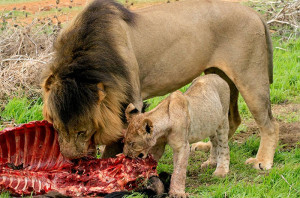 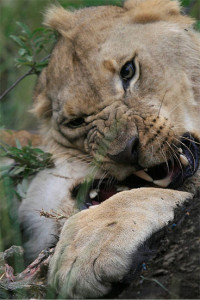 Getting to the sad part now…………

On the day we found these beautiful new babies, one of the youngsters at the back seemed to have injured his left back leg. He really struggled to keep up. Every now and then mom and his siblings would stop and call out to him. He was very weak. I knew that the mother was worried because it was getting dark and that the slow pace would put them all in danger. She went back probably 8-9 times to nudge him on. Everybody on the vehicle was touched very deeply by the happenings on that evening……. that’s nature. I now understand how hard it must be for wildlife photographers not to interfere with the natural course of nature.

In nature a mother’s love can only stretch so far. If she decided to stay with him she might exposed all of the cubs to predators or other dangers. As it was getting dark we left with the feeling in our hearts of, ‘is he going to make it through the night?’ After that night we have seen the mother on her own again a few times, but haven’t seen the cubs again. She is really hiding them well, as a good mother does. Up to now, we are still not sure if there are four or only three left!

As the cubs grow older they will all sit together around the dinner table, and it will be every cub looking to devour as much of the kill as possible. They still have to share the feast with their siblings that are now one year old already.

If there are males around, they usually eat first, with the females to follow. Only then do the children get a chance. On rare occasions, a big male lion will tolerate a cub around his food. Etali, being a single mother, almost never has to fear a visiting male near her cubs after a kill. The father will make a rare appearance now and then but he is usually very tolerable of his own cubs.

Till next drive
Grant

Well, that is all from us for March. Please remember to book that holiday, you well deserve, as soon as possible!

Come and relax at Tuningi. Revive yourself, run away from your hectic schedule, lock away your watch and just give yourself over to the slow rhythm of the African bush. In absolutely no time at all, you will be hooked!

We can’t wait to see you!
Kindest regards
The T-team 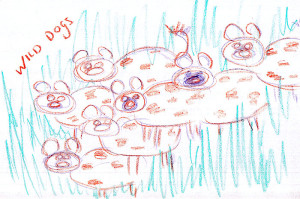 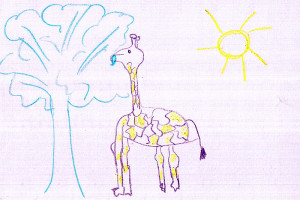 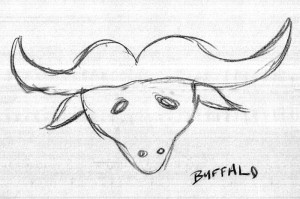 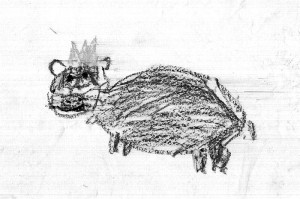