Warm greetings to all of you once again.
All is going well here at Tuningi and as usual, we have had a tremendous month full of excitement, great adventure and wonderful sightings.

Although we have already had bits of rain here and there, we are actually waiting in anticipation for the big thunder storms next month. This will bring on green, lush vegetation and all the beautiful Spring flowers will appear like little gems in the grass. With the bush being a bit less dense at the moment, the sightings of the elusive big cats were better than ever. 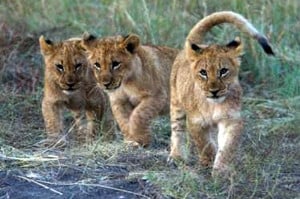 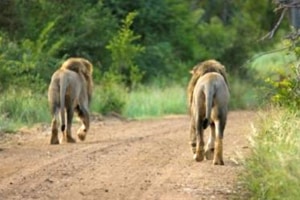 Rangers Report
It has been a Cat prolific month with all kinds of different sightings having been enjoyed by our guests at Tuningi. Firstly, the lion sightings have been keeping us rangers on our toes when it comes to the tracking efforts we have to put in for hours on the safari, as the northern prides are up to all kinds of strange behavior.

The Etali female and her new youngsters which were born in February are now starting to travel with mom and are learning the everyday ways of life a lion must endure on the African savanna by observing the intricacies of the hunt, but are somewhat amateur at their efforts, and are often spoiling the hunt for mom.

The Etali’s youngsters from 3 years ago have now severed their ties to each other and have now started a new dimension to their sibling relationship. The male has now reached the age where he has to go out on his own and relinquish the comforts of lioness help. He is banished to bachelorship for at least two years before he may end up a territorial male elsewhere in the park. This is due to the dominant Sereti males driving him further and further away from his birth territory. His sister has now joined up with Etali after 2 years and seems to be taking on the responsibility of aunt by helping in the hunt to feed the ever hungry cubs. 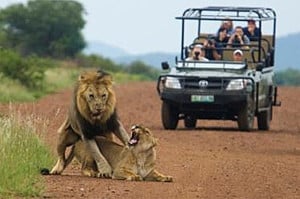 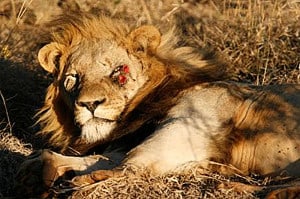 The Sereti males have now established themselves in the north western section of the park and seem to be growing by the minute as they are now coming in to their own with impressive manes and brute strength.

The Tchaba female and her offspring from 2 years ago have split up for the time being, as she has come on to her oestrus cycle and has been on honeymoon with the Sereti males for the last week. (Lions will copulate every 30 minutes for around four to five days non- stop ensuring impregnation).

The southern pride surprised us last week with tell tale signs that both the Tshabalala females are suckling cubs with dirty nipples being the evidence.

This caused great excitement amongst the rangers as the race is on to find their secret lair, for that incredible privilege of seeing the tiny cubs for the first time. However, we have discovered that the likely fathers, the Tsholo-Mateya coalition which have been the rulers of the southern territory are no longer the land lords in that area. They have had a territorial dispute with the Kgala-Etali coalition from the east, resulting in the Mateya male getting severely injured in the process and landing up second best forcing them to relinquish their thrones and seek asylum on the ridge to the north. We have not seen them that often and rumours are floating around the park that they may dead…… let’s hope not!!!

So the Kgala-Etali males are now our new land lords of the south and hopefully will provide us with some great photographic opportunities in the days to come. 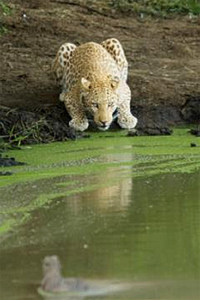 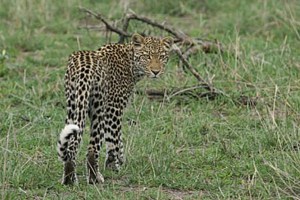