Greetings to all of you once again,

November was a month full of promise, as the start of the rains brought some much needed relief to the bush, and things are starting to green up transforming the vegetation in a matter of days to a healthier state.

We will start off with the positive news in that we are having amazing leopard sightings this month, and the arrival of a new young male into our area has got us all very excited, as he is very relaxed and seems to be staying in the area for now. He even joined Cornelius at one of his sundowner stops, and was spotted by another guide passing by lying on the road and observing the occasion. 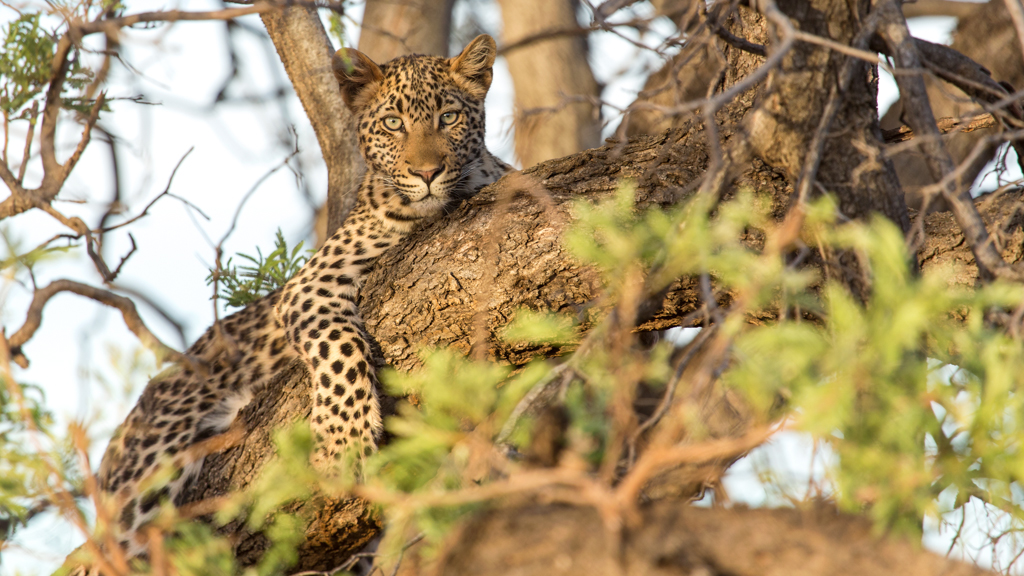 Tsala, our resident leopardess has also impressed many a guest with her beauty and power, as she was seen on a few kills she had made including an impala and a young zebra on a different occasion. 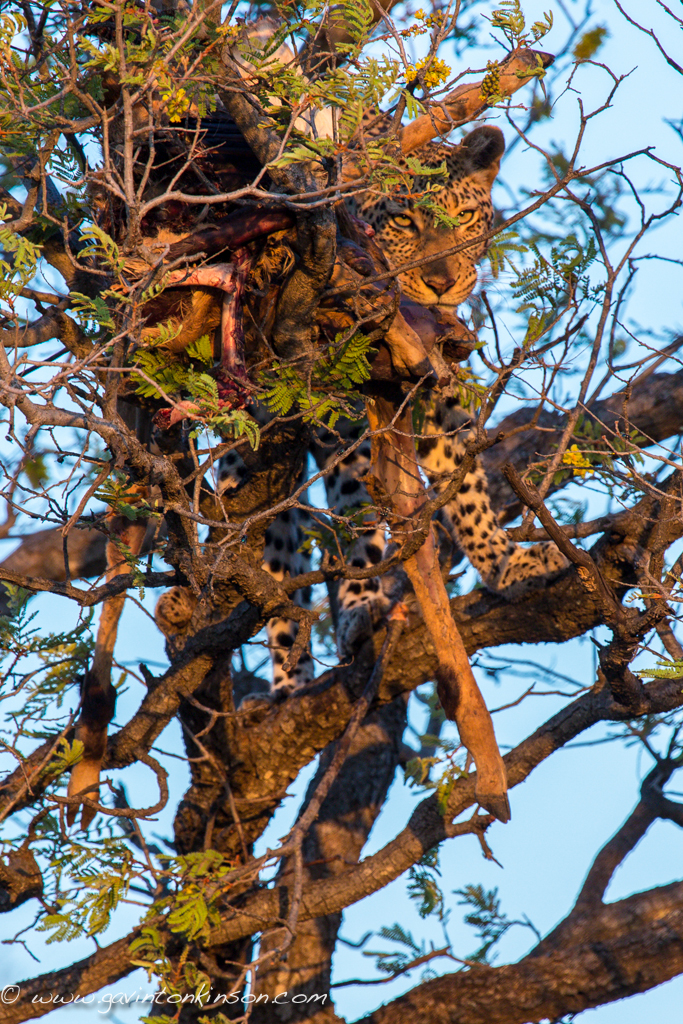 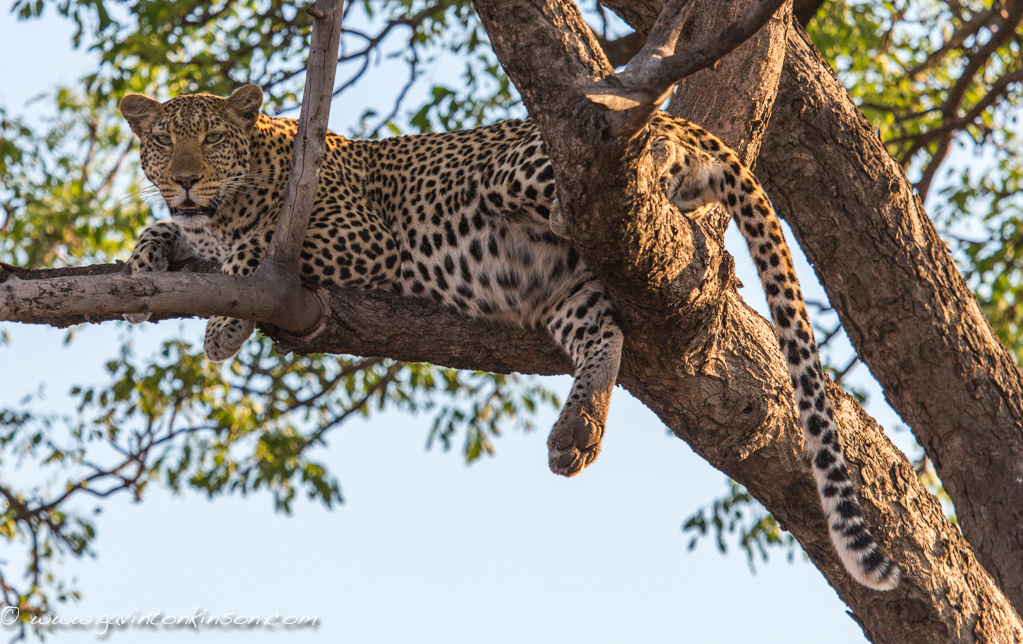 We are hoping that she will get pregnant soon, and allow us to share in the new arrivals, which would really make the pinnacle of our daily safaris.

The 4 cheetah brothers are doing extremely well, and they are killing on a regular basis, but are also travelling extensively In the park in search of a female, but as of yet the park authorities have not yet acquired a suitable candidate to be brought to Madikwe.  So in the meantime, they are still searching. 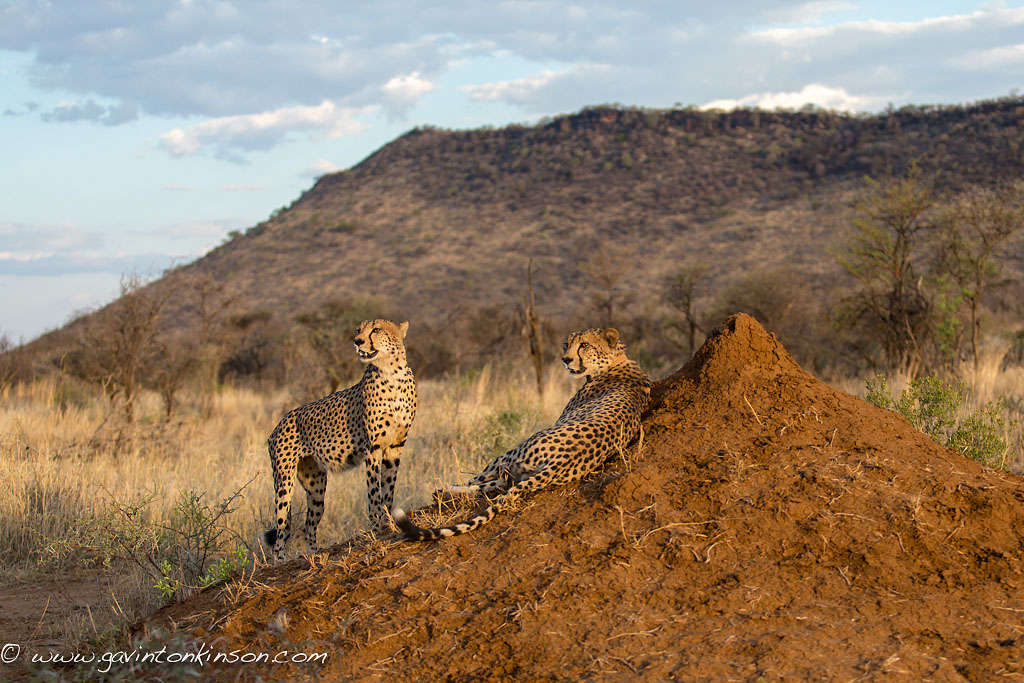 Our lion prides in the area are looking good, and the Jamala prides cubs have now been weaned off of milk from their mothers, and are growing incredibly quickly as they are having regular meals all thanks to their efficient mothers.

They are also at an age now, where fun is the name of the game, and they are honing their hunting skills as they stalk and attack each other in some serious aerial acrobatics. 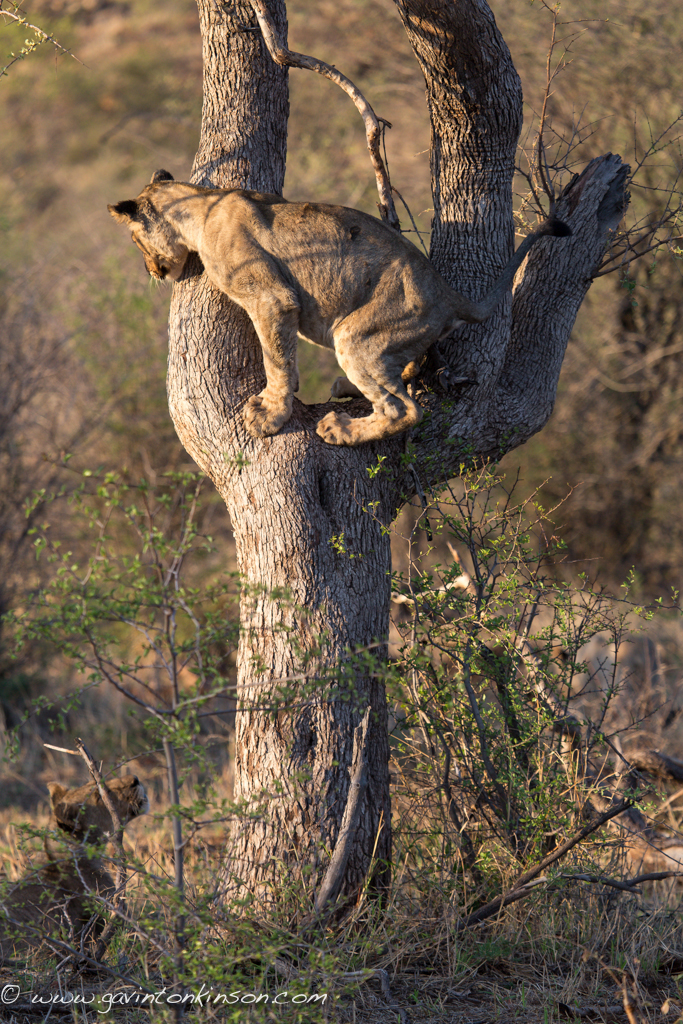 The Naledi brothers, which are the fathers of all these cubs, are feeling some pressure from the new Kwandwe males which are pushing in from the east, and they are having to spend a lot of time on the eastern boundary of the territory to re-scent the area with their presence. The Naledi boys are getting old now, and at 9 and a half years are in their twilight years as a dominant force in the south west, and it wont be too much longer before the Kwandwe males grow increasingly confident and will plan on a territory overtake in the not too distant future, so stay tuned for this development.

The Kwandwe males are so confident in their strength at the moment that they even attacked and killed a young elephant , as well as a buffalo this month. These guys are going to be a force to be reckoned with !! 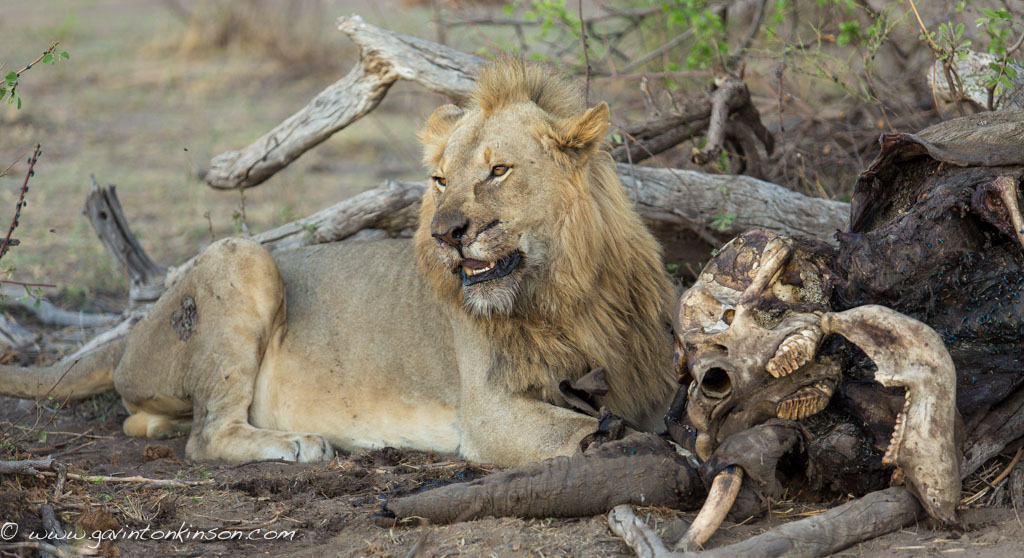 Then, the story of the month must go out to the charismatic and efficient African Wild Dogs which Madikwe is so famous for !

It was a lazy afternoon, and the sun was out just after a short rain storm, and the fresh smells of the bush overwhelmed us as we drove around in search of the big 5, when we bumped into the small pack. They were on a mission !! You could see this in their eyes, and they were ready to hunt something down. Well, they continued on their ways, and not before long they came across some zebra with newborns with them, and before we could even blink, they were marauding the zebra, and creating chaos hoping for them to run. But the zebra stallion came to the challenge and started chasing and kicking at the dogs, which soon discouraged them, and they went off in search of easier prey. 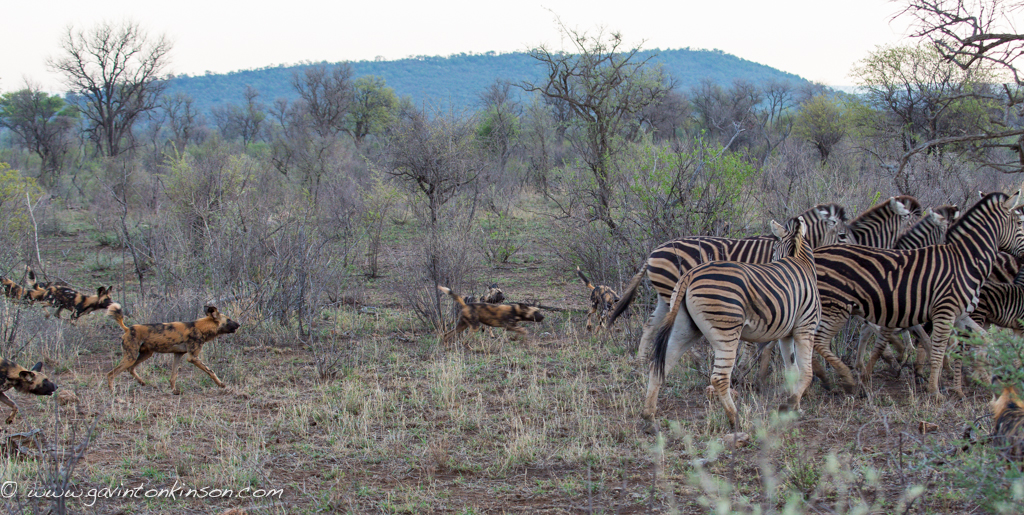 After a short break and psyching up session, they were on the move again, and ran off into a westerly direction. 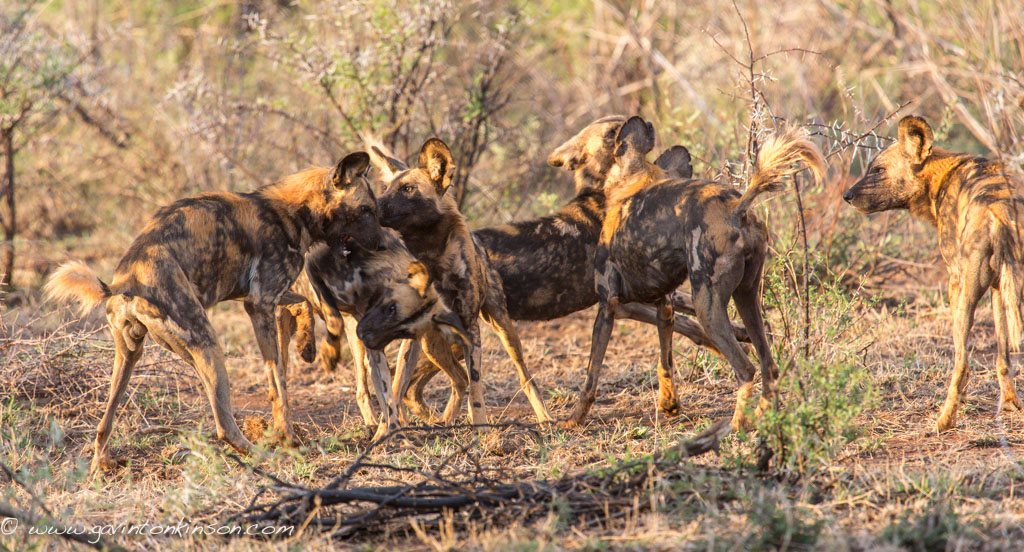 This is where one of the most amazing sightings I have witnessed in 13 years of my guiding career unfolded.

The dogs bumped into a herd of buffalo of around 50 strong, and as if they had practiced this before they charged into the herd creating chaos by giggling in their high pitched voices forcing the herd to scatter. Within seconds they had identified the target to be a mother with its very young calf, and they proceeded with the task of separating the calf from the very angry mother. 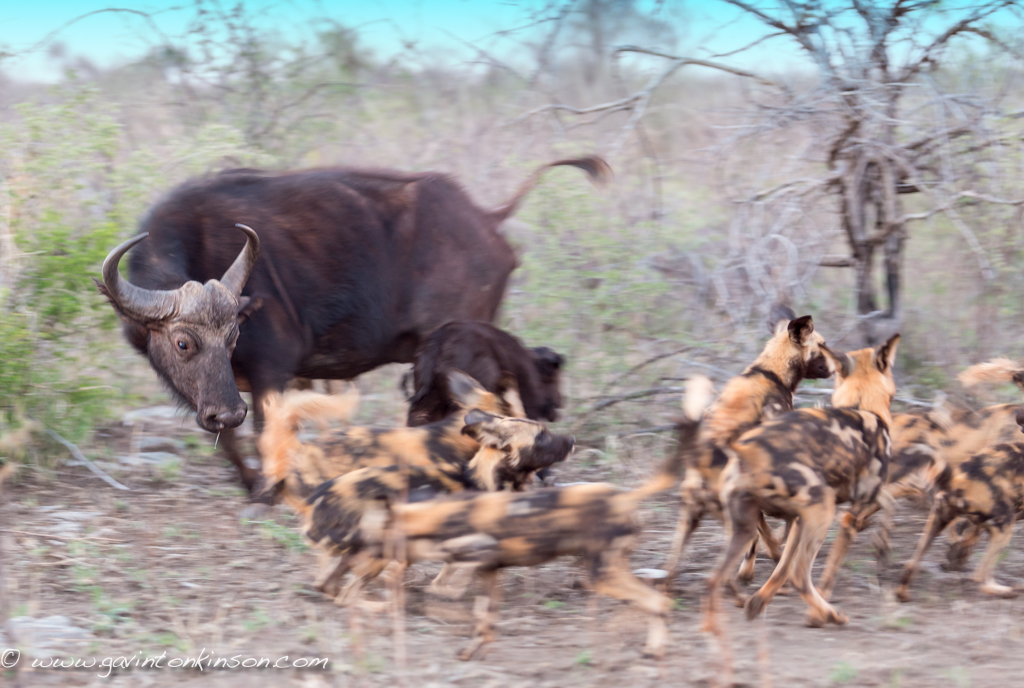 This continued for around 15 mins before they eventually separated the calf from the mother. This was the start of the end for the young calf, as the dogs overpowered it while others kept the attentions of the mother at bay by biting her on her tail as she swung around to defend her calf.

The rest is history, and no words can describe what emotions are felt in a situation like this, as my guests were all in tears and even wanted me to leave the sighting.

It is moments like these that we as rangers live for, and a sighting like this comes around only once in a career for some, and I was extremely happy with this sighting which is only the second time in my career that I have seen wild dogs taking on buffalo and succeeding !!

Until next time, we wish you all a blessed festive season. 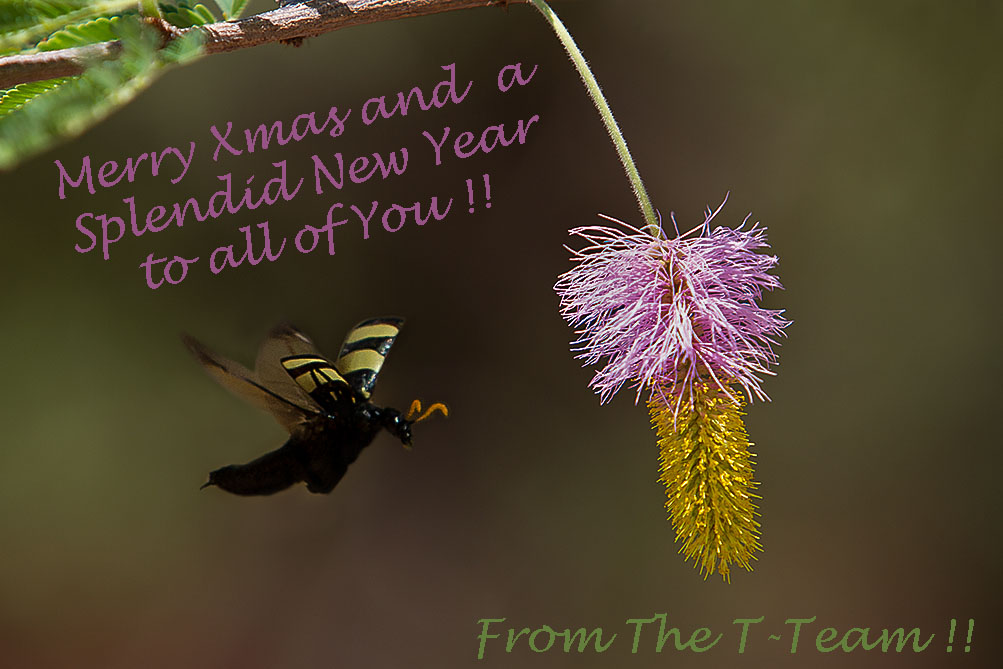