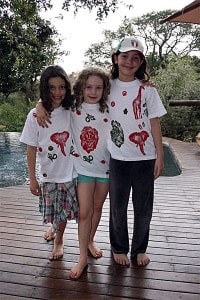 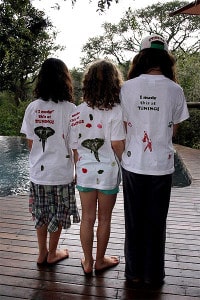 Hallo again.
Most of you must still be on holiday, as Easter came early this year.
We love Easter here at Tuningi, because it means that we usually have lots of children around over the long weekend.

This year was no different. Great friendships were formed between children from all over the world. Vast quantities of Easter eggs were hunted down and consumed. The game drives were full of adventure as usual, and the kids were taught things that no school will ever be able to teach them. Between game drives the pools were being used to their full capacity and in between all the swimming, fabulous works of art were being produced. The big five were molded in clay, hundreds of pictures were drawn and coloured-in and everyone had a chance to paint their own T- shirts to take home as a reminder of the wonderful time they had with the T-team. 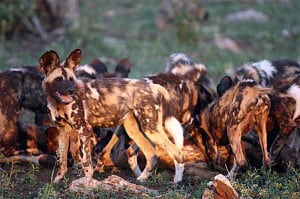 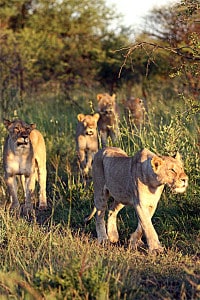 Easter brought some sunshine, after we had an incredibly wet start to the month! The rain came pouring down in such vast quantities that the roads had to be closed in the Reserve and some game drives had to be cancelled to the huge disappointment of our guests. Between the 11th and 19th of March, we had 255ml of rain. That is 50ml more rain in seven days, than what we have had in the entire last rainfall period, last year. We would obviously only cancel a drive under extreme circumstances and most days we just waited for the downpour to ease up a bit and then still went out on some rather slippery adventures. The most we could do on these days, was to stay on the main road and hope for a lucky sighting.

It is usually when you least expect it, that you come across something amazing. One afternoon, we had to wait for an hour or so after usual game drive time as it would be impossible for the ranger to see where he was going in such a storm. When we went out eventually, we happened upon the wild dogs and watched them play around for a while. Luckily, it stopped raining completely for a few minutes, and we decided to use the opportunity to stop somewhere for some sundowners.( Not that we could actually see the sun going down!) While we were all standing around, having a drink, the wild dogs, whom we had left earlier, suddenly appeared from nowhere and caught an impala right in front of our eyes! We threw all the picnic gear into the car, jumped in, drove over the cool box in all the excitement to get even closer, and watched how they devoured the whole impala in less than seven minutes. While driving around and following the dogs, usually almost impossible to see a kill, because of the tremendous pace they reach in pursuit of their kill. We were merely at the right place at the right time.

The very next afternoon, after even more rain, we made our way to the airstrip where we knew the famous Batia brothers (the two oldest male lions in the park) and the Dipello female with her cubs had eaten a Wildebeest in the morning. When we arrived on the scene, they were all just lazing about and with lack of roads to travel on, we switched off the car and just sat and watched them for a while. We suddenly realized that the lion’s were slowly starting to spread out and as we looked behind us, we saw a whole bunch of wildebeest moving towards us and the lions. We saw the whole pride circling around the wildebeest and going down in stalking mode, the young ones, too…. In a few seconds, one of the wildebeest was dead in the claws of the old lion! Wow, Two kills in two afternoons!

With the lion pride being still well fed since the morning, they used this kill as the perfect opportunity to teach the young ones how to grab with the paws, get stuck on the muzzle, suffocate the prey and then hold on until it is dead. In front of our very eyes we saw each cub taking a turn to perfect the procedure.

These are just two of the awesome sightings we experience in the bush every day. It is impossible to truly describe any of these in words. You have to experience these things with all of your senses. The smells, the sounds, the sights and the emotions felt in these moments, has resulted in many a person falling totally and unashamedly in love with Africa! 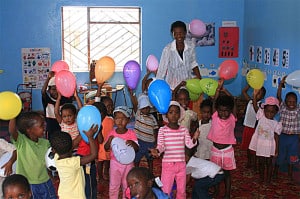 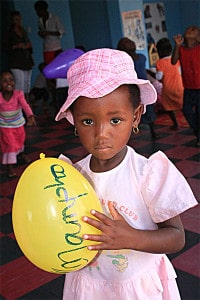 On a completely different note…
Madikwe is fast becoming famous as one of the New South Africa’s success stories in the area of upliftment and poverty eradication. The Madikwe model instructs that people must be placed at the centre of any conservation initiative, in order for conservation to really work.

We already have two lodges in our Collection belonging to their own communities, while most of the other lodges (Including Tuningi) are employing more than 80 percent of their staff from communities just outside the park.

We as a Lodge, have decided that employment is not enough, and have decided, with the help of our friend, Hilary Wylie, to adopt the pre-primary school in Supingstad and its upliftment, as our personal project. This is the village where most of our staff live. We are in the process of starting a fund for them and for the time being are visiting them once a month, delivering educational toys, books, balloons, crayons, t-shirts and anything that has been donated to them by our generous guests. It is the most heart warming experience to see the joy on these little kids faces when we visit them!!

Next time you come and visit us, please remember these kids and pack a couple of coloring books or soccer balls or anything small enough to fit into your suitcase to add to these donations! It is amazing how good it will make you feel!

As usual, we can go on and on, but we will rather keep some stories for the next time!
We hope you enjoy the rest of your holidays and that we meet again soon!

Kindest regards and all the best to you until we chat again.
The T-team.

P.S. Do not forget to have a look at our beautiful kids art gallery!! 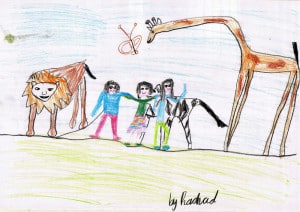 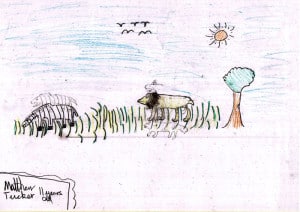 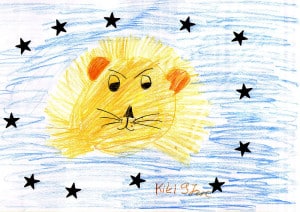 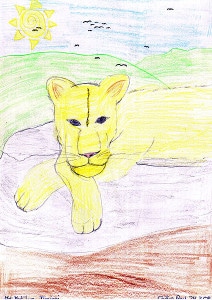 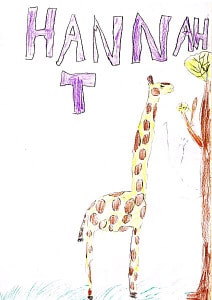 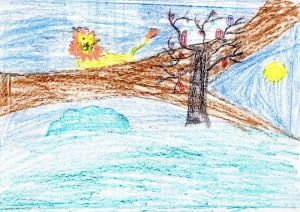