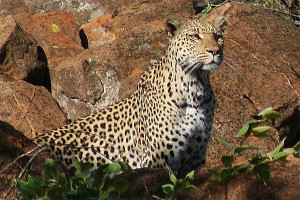 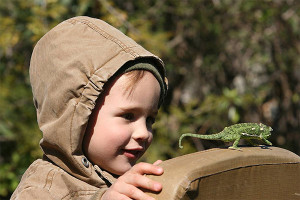 A very warm hallo to all of you once again.

We are now in the middle of our Winter season with freezing cold temperatures in the night. The days , however, are still clear and warm and very comfortable. Although it takes a lot of guts to get up at five thirty in the morning to go out on game drive, it is always worth your while as game viewing is at its best this time of the year. The grass has thinned out a bit and makes it much easier to spot the animals. The bush has now turned from green to gold. Most of the intimidating insects and scary reptiles of summer have disappeared. No flies and moths are bugging us at the lunch and dinner table any more. No ants are patrolling the kitchen door and most snakes and spiders have also gone to bed for the rest of the cold season.

Some of the smaller water holes have dried out by now, which forces the animals to frequent the bigger dams and come to fresh bore hole water at the lodge. We love to drive out to Tlau dam in the afternoons and just sit there and wait for someone to come and drink. Just yesterday we were spoilt by spotting elephants, rhino and buffalo at the dam in quick succession and then, as we were about to leave, to our great excitement, a leopard carefully made his way to the water, right in front of the vehicle!

Seeing a leopard in the wild is always a breathtaking sight. It is just the most beautiful animal on earth and one does not often get the chance to watch them for a long time as they are very aware of the vehicle and usually move away as quickly as possible. When you are sitting dead quietly in a parked vehicle and they approach you, it is awesome and you can consider it one of your lucky days!

We are of course not only interested in the big five and their friends and are always on the lookout for the smaller, interesting creatures as well. The rangers are extremely good at spotting things like little bush babies and even chameleons with their spotlights at night on their way back from the game drive. Sometimes they will bring the chameleon back to the lodge to give the kids a chance to study them better in the day time after which they set them free again.

The flap neck chameleon, as seen in this picture, while awake, resting and unstressed, is usually an emerald green colour. However, this species is renowned for its ability to change colour, varying from almost black when stressed, through to all shades of green, yellow and brown. The body becomes a washed out whitish green or yellow while the animal is asleep, making them easy to find with a spotlight. Most lizards are capable of focusing each of their eyes on a different object simultaneously, but chameleons have mastered this. Each eye can scan almost 180 degrees. They have much more acute vision than humans. They feed on grasshoppers, beetles, flies and butterflies, snaring them with their long, sticky tongue which equals their body in length when fully extended. 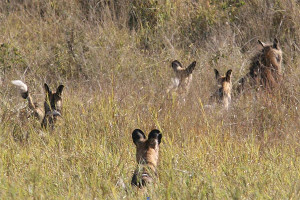 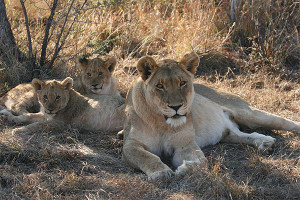 Back to the bigger species. We are very sad to announce that we have lost a lot of the highly endangered wild dogs that have been doing so well in our Game Reserve. The lions have killed three of the Collection Pack, which previously consisted of seven dogs, in a huge fight. They also injured the female, who just had her cubs, in such a bad way that all her milk dried up resulting in all of the cubs dying. It is such a huge pity as we were hoping that the pack of seven would now be the pack of seventeen! Unfortunately, the pack now only consists of two healthy dogs and one fighting for her life.

At least the two dogs, luckily one male and one female, are still coping well and catching enough food for themselves without any problems. We will certainly have to intervene once again and try to get some new blood into the reserve soon in order for them to form a full pack again. The good news, on the other hand, is that two groups of lions have added some cubs to their families. The Dipelo female had three babies who are now ten weeks old. They are just too cute and a high priority for our tick list on game drives at the moment.

We have also heard that the Mica pride was spotted with three new born cubs. Unfortunately we do not have pictures of them yet, but will certainly show them to you as soon as we can!. 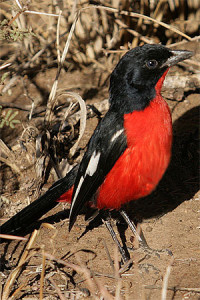 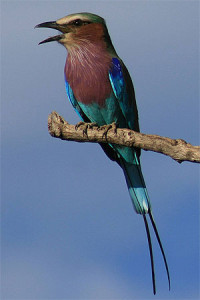 November 29 is Birding Day. This is a VERY exciting day for all professional and non professional birders all over the world. Birding day lasts 24 hours and the objective is to see how many species a team of three or four people can positively identify within a 50-kilometre radius. A birder may also tick a bird if he only heard it and could identify it by sound. As you all know by now, we have very highly qualified guides at Tuningi who even know their LBJ’s (little brown jobs) by name. We would really like to put two teams out into Madikwe from Tuningi on Big Birding Day. If you would like to come and join in the fun, phone SA 011 805 9995 and book your place on the team. Make a weekend of it and bring the family along. We would love to meet you all and need your expertise!

We are seeing a lot of the crimson breasted shrikes at the moment., they are any bird lovers dream! The lilac breasted roller may be a common sighting, but still remains one of the most beautiful birds out there.

Remember to pack your Winter gear if you are on your way to us this month! We will warm you up with the wood burning fires at the lodge and a sneaky hot water bottle here and there, but be warned, it is really cold out on game drive! At least there is always hot chocolate available and a port or sherry or two!

Well, we have to say goodbye once again. We hope you have a lovely month of July until we chat again

P.S. We are having trouble with scanning the kids art this month . Instead we are showing you some of our favorite ‘Kids on safari at Tuningi’ photos of the past year. 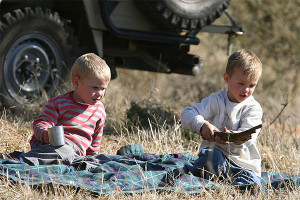 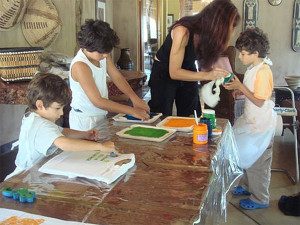 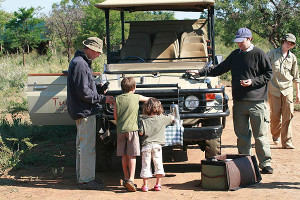 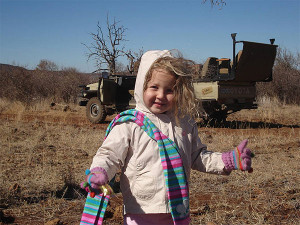 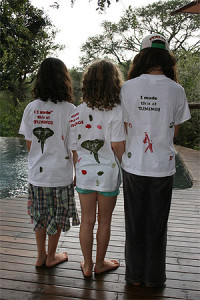