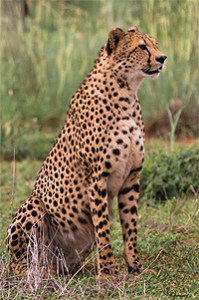 Greetings from a green and sunny Madikwe! Yes January has come and gone and as always Madikwe has produced some top quality sightings in the New Year.

One of the highlights this month is our new cheetahs. We have been lucky enough to see them on a regular basis as they are keeping mostly to the South of the park and already playing a big part in daily sightings. One morning Gavin and I went looking for them. We searched high and low and eventually Gavin found them close to the park’s Western boundary. Just as I arrived they went up a ridge and disappeared from sight. Wanting to see them, I remained positive and went around the ridge to the other side in the hope that they will make their appearance. I was still driving slowly along the foot of the ridge expecting to see them coming down when all hell broke loose further ahead of us. The cheetahs came down faster than I thought and was trying to get their teeth into some wildebeest, apparently succeeding as we heard the distress calls of one unlucky wildebeest. We sped off to where the wildebeest were still snorting in alarm and found the cheetahs sitting in a big open clearing with wildebeest running in all directions. We just missed the action as they probably managed to get hold of a wildebeest, but it must have gotten away…damn!

The leopards of Madikwe have continued to amaze us with sightings in 2013 and I’ve enjoyed some of the most impressive leopard sightings to date. Tsala the female from the South apparently has a cub, but we have yet to see it to believe it (please, please, please). Yet, in the first few days of January we found her with a young wildebeest kill that she stashed up in a big Maroela tree. Tsala has become totally relaxed with vehicles so we were able to park underneath the tree and mesmerisingly watch this magnificent creature without her even batting an eyelid at us.

Podile the female from the Tlou dam area has also shared some breathtaking moments with us. Specifically one morning when some of the guides found her hunting impala. When I joined the sighting she was resting in a serious thicket, taking a break from hunting and try as I might, I could not get to see her. Rather desperate, I decided to play the waiting game and hoped she would come out again. After a bit of waiting Podile did not disappoint as she strolled out of the thicket and ended up walking straight to the vehicle. She passed the vehicle’s bumper by millimetres and proceeded to stalk the impalas that were still in the area. 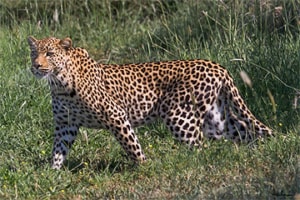 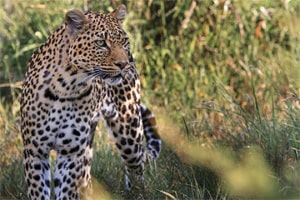 Earlier this month, I was honoured with another wonderful sighting. For a while now we’ve suspected that the two Bolaya Lion females in the South have had cubs, but try as hard as we could we were not able to find them. Then one morning we found the 2 females close to the Western Airstrip. They were walking down the road and as they turned off into the bush I decided to stay with them in the hope that maybe, just maybe, I will get lucky and see the cubs. We followed the two females for about 300 meters into the bush where they sat to rest. One lay down in the open, and the other one crawled under a low branched Karee tree. We struck gold as one little cub made his appearance and started suckling on his mom lying under the tree. We could not see the cub clearly through the branches and leaves, but what a feeling to find this new lion cub. Since then we have sighted these females and their youngsters (the first female has 1 and the other female has 3 cubs) on a few occasions and it is always a treat to see what antics these cubs get up to. 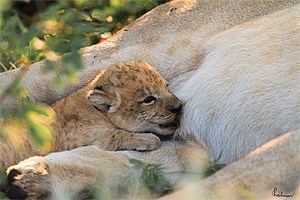 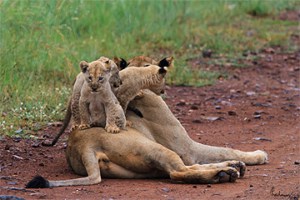 One morning we decided to pack provisions for 3 day trip (including our passports) and said good-bye to friends and loved ones for our perilous journey… to the East. The reason for this brave and dangerous act was to go and find some wild dogs. During this time the small pack was in hiding and we had this irresistible craving to see the wild dogs again. So after a long journey through unchartered lands and mysterious places, Gavin located the pack of wild dogs where they had just finished eating an impala they had killed. They were just lazing around digesting their food. Then the magic of this new wonderful world kicked in and we watched as four rhino’s strolled out of the bushes to come and satisfy their curiosity. The dogs did not mind them but respectfully stood up and left when a rhino came too close. This same respect was not shown towards a herd of wildebeest who shortly thereafter also came into the area. Tthe dogs flew off after the wildebeest to try and secure another meal. The wildebeest not too impressed by this, then ganged up on the wild dogs and started chasing them around, leaving the dogs with no meal and a red in the face. Luckily we survived this death-defying journey and made it back to the lodge just in time for a well-deserved breakfast, that same morning I might add. 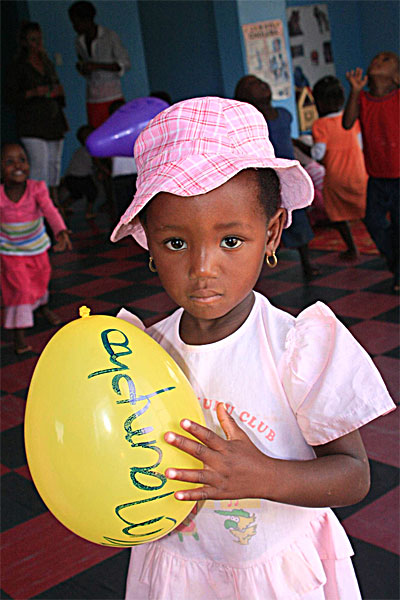 Cornelius also had a busy January and I’ll let him tell you more about the conservation work he helped with:

I had the most memorable weekend out in the bush.

Wild Eye Destinations organized a conservation weekend and chose Tuningi as the venue. Friday morning we headed to the east of Madikwe where the four male Cheetahs stayed in the boma. The task of the day was to dart and collar one of them. 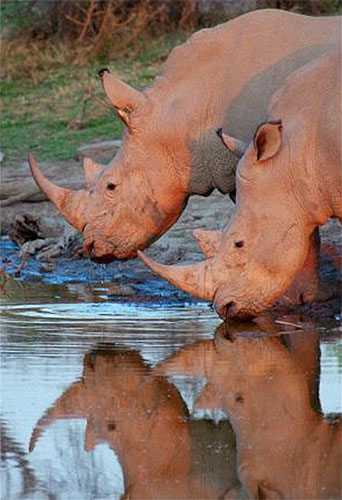 It’s been some time since Madikwe has had cheetahs, so it was necessary for the collar to be put on so they could be monitored and also found on game drives. To be able to get that close to these animals were fantastic.

Saturday was filled with so much emotional excitement. We started very early with the darting and branding of lions. It was the Tshaba pride from the North West of Madikwe that had to be marked. The brand mark is to differentiate the pride members. 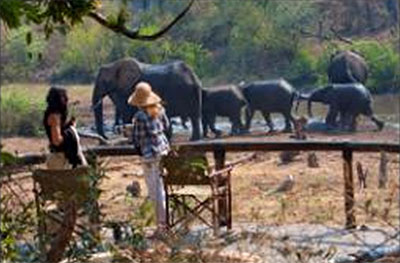 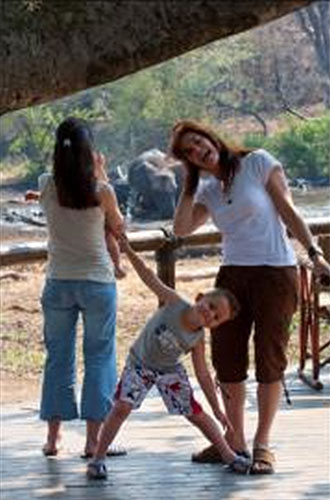 Three of the pride members were darted by the vet. At first I was very cautious of these massive cats. To see the animals on a game drive is one thing but to touch them, O MY, the feel of their rough tongues, the sharp teeth and those massive paws. I still pause and think back to that day.

As soon as the lions woke up we left them in peace. Now it was time for the rhino ear notching. We dropped the pilot at his helicopter after which he took the vet and one of the guests up to start the search for the rhinos. Luckily it was an overcast day which helped lessen the heat and stress of the animals.

The first animal was a big female. Her size was mind boggling! Lying down she was still more than a meter high. The next in line were a female and calf. The calf was so cute, it was almost sitting up and waiting for us. 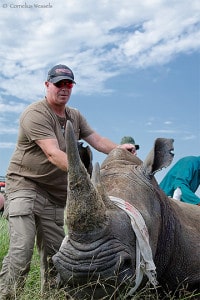 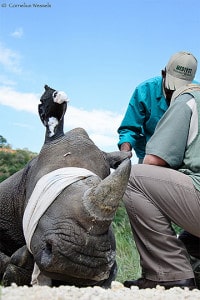 Everyone involved was extremely passionate towards their work on that day and we all learned so much. In total four rhinos were notched and micro chipped. Live on, amazing beasts!

Sunday was the big finale! The four male cheetahs were released. An impala was used to lure them out of their safe haven of the past 2 months. It was such a rewarding feeling to see them walk through the gate out into the wild. After a bit of feeding one of them already stretched his legs and ran into the distance.

It was such an honour to be part of the whole experience. 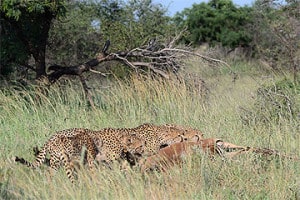 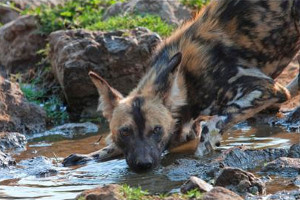 This month the kids at Tuningi again created the most amazing animals out of clay. Thank you to Daniel & Henro Rossouw who shared their photo with us!

Well that is some of the awesome sightings and adventures we’ve had this month. We hope you will keep to your most important new year’s resolution (the one where you said you will come and visit Tuningi in 2013) and come and share in some mind blowing journeys with us.