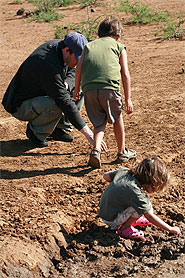 Festive greetings to all of you!

We hope that you had a fabulous Christmas day and a fun filled New Years party and a wonderful holiday spent with all your loved ones!

We at Tuningi had a very busy and most exciting month. We were fully booked with mostly families and lots of children everywhere. Great friendships were formed and we are sure most of the guests and their kids are going to keep in contact with all the other people from all over the world that they have met here at the lodge.

We went out of our way to educate and stimulate our younger guests, as usual. Kiddies drives were the order of the day with feather collecting, identifying of tracks, dung spitting competitions, finding eggs in nests and lots more…..

Back at the lodge we were creating works of art out of play dough, reading books, building puzzles, painting t-shirts and swimming in the pool for hours.

The grown-ups, on the other hand, had just as much fun on game drives as well as back at the lodge.

A couple of masked weavers chose the trees with overhanging branches next to the main lodge swimming pool as the ideal spot for their nesting frenzy. We were entertained for hours by the weavers that were all frantically busy building nests for their fussy wives in time to lay their precious eggs. It was a hive of activity all day long as these guys were flying up and down collecting building material and then bringing it back and skillfully weaving a home for their offspring. After securing the initial attachment to a suitable branch, the weaver builds the ring- the foundation of the nest. Next, the roof is woven over the top ring, followed by the bulbous egg chamber. The ante-chamber, which serves as the foyer of the home, and the entrance to the nest are then completed, followed by the entrance tunnel. Once the female has critically inspected the male’s handiwork, she either gives her approval or tears down the nest and makes him start all over again!! If approved, she then adds the finishing touches by providing a layer of soft, thick lining to the egg chamber. Lying in the sun next to the swimming pool watching the birds work so hard is truly a humbling experience.

You can see how the young bird’s first attempts at nest building is a little bit more unskilled than the others and then how they become more skilled in choosing the right materials and perfecting their weaving technique. The more the female breaks down the nest, the better these males become in their weaving and knot tying abilities. Practice makes perfect!

Out there in the bush, babies rule. The babies Impalas finally dropped in the first week of December and are just the most gorgeous creatures on earth. Baby zebras, wildebeest and hartebeest can also to be seen all over the place. The predators are all in perfect condition as they can catch these little babies easily for a little snack whenever they feel like it. New born baby Impalas are even small enough for birds of prey to catch and eat!

Lots of interesting things happened out in the bush this month.
Firstly a huge white rhino was trampled to death by a very aggressive elephant bull in musk. The elephant did not feel like sharing his watering spot at Tlau dam with the rhino and a deathly fight erupted. Tshaba, the lioness and her offspring found the dead rhino first and obviously could not believe their luck in finding so much meat without having to kill it themselves. They feasted on the enormous carcass for days and then made way for all the other scavengers to finish off the job and get rid of the awful smell.

The two Bartia brothers, who are the oldest and biggest lions in the park also surprised us with their enormous display of strength. We were all beginning to worry about their hunting skills as they are really getting old now with the hair falling out and not having all their teeth intact anymore, but they showed us exactly what they are all about by bringing down a huge zebra on their own, and carrying it around as if it did not weigh in at at least 250kg!

Unfortunately we have some bad news as well.
The two wild dog packs in the reserve that were doing so well, finally bumped into each other this month and as instinct got the better of them they had to fight for their territory and genes, resulting in four mortalities. Two dogs of each pack were viciously killed leaving us with a pack of six and one of sixteen at the moment. Luckily it is almost denning season for the wild dog so we are hoping for lots and lots of healthy babies in a couple of months!

Wow….. Although we do not always understand it, Nature can be very cruel but fortunately always gets the balance right in the end.

Best to book your holiday at Tuningi soon if you want to come and share in the season of plenty. It truly is a special place.

Until next month.
Hope to see you soon.
Kindest regards
The T-team. 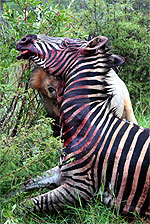