Warm greetings to you all! 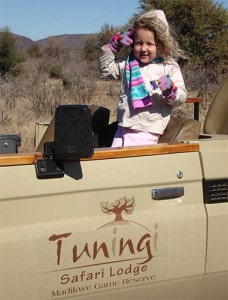 Spring is in the air and life is just beautiful! August has been a terrific month for us here at the Lodge with lots and lots of old friends returning for a second or even third visit! We welcomed back people like the Barnards, Summerlees, Rebuffos, Varneys, Piechotas, Gomersall, Heuslers, Adams’, Shonborns and Kurlands.

No words can describe our delight when a familiar face enters our front door! We immediately go to our archives and dig up photos and memories of a previous visit and obviously try to turn the return visit into an even more memorable occasion than the previous one. A great example of this is of little Erin Kurland who took three years to come back! How wonderful to see that gorgeous girl again. We first met her when she was only three years old. How she has grown! 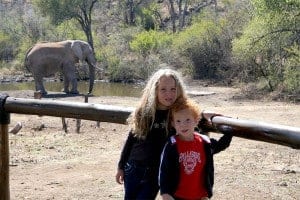 For those of you who have not been to Tuningi…… Come soon! Such a lot of return guests should show you that we are doing something right!

It is of course not just the Lodge, the service and the friendly staff that secure return bookings, it also has a lot to do with the amazing job our highly qualified Game Rangers do in showing off the abundance of game in the Reserve. 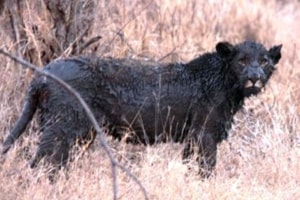 Some more detail on the sightings from Grant:

We have been extremely lucky this month with animals around the lodge. With no rain and no water in the small pans around us the elephants, buffalo lions and even black rhino were regular visitors to our waterhole at the lodge. 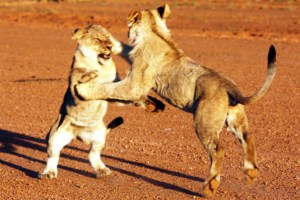 But the most exiting of them all was when the Kgala Etali brothers killed a big eland bull just outside the lodge. I actually woke up one morning around 3:00 from the commotion outside. We only saw the evidence on the morning drive. 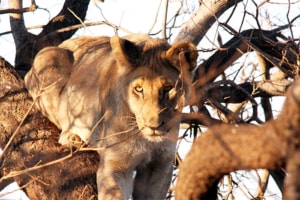 Eland are the largest antelope and can weigh up to Kg 850. They didn’t even move the carcass into shade or cover. I just think it was to heavy and knowing male lions they are very lazy. 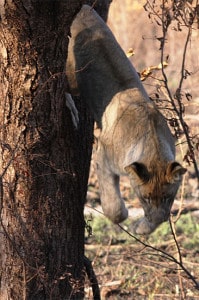 We had fantastic interaction between the boys and a lioness that joined the feast after two days. The great thing about this sighting was we could see how everything disappeared gradually and how the scavengers were waiting patiently for the boys to finish up and go. Even the vultures were hanging around in the surrounding trees. Sadly they never got a chance to get down for some real action. At one stage one of the males used the vehicle to stalk a snooping spotted hyena. Lions in general hate hyenas but male lions have an obsessive grudge against them but most of the time the hyenas are one step ahead. 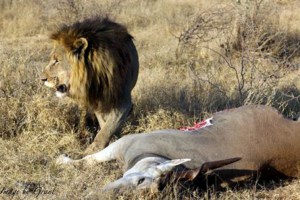 In the afternoons there was very little action and we mostly saw them eating early morning and in the evenings. For the rest of the time they were digesting in a deep sleep. They were there for about 5 days before they decided that they had enough. They really did a good job of finishing the carcass.

The only they left was the head and vertebrae and a few ribs. We went back on the fifth morning and found a few hyenas chomping away on the bones. These guys have extremely powerful jaw muscles and are capable of cracking open some really big bones.

That is more or less how this Madikwe CSI scene unfolded with all the evidence disappearing in front of us. 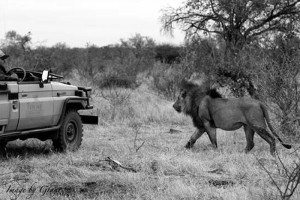 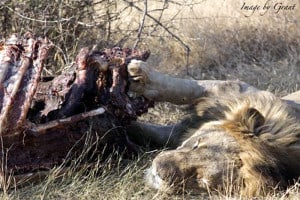 One afternoon we had the most bizarre sighting of black lions at one of the dams in the north. We arrived there and found three lions buried in the mud busy eating something. We couldn’t see what it was but we gathered that some antelope was thirsty and got stuck in the mud. In nature it works like this: one’s loss is the other one’s gain. 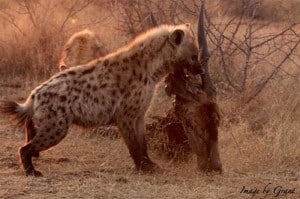 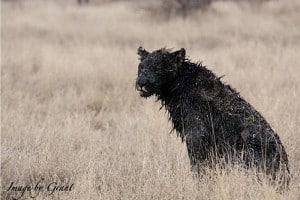 We went for sundowners with the idea to return to the dam and hopefully the lions would be out of the mud, and oh boy were they out in full force and feeling really sorry for themselves. This just goes to show that lions do scavenge as well. 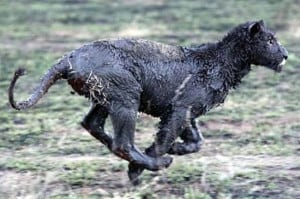 We all thought that these lions woould never be the same again but we saw them the other day and they do look a little better.

Well, if you are still not convinced that you should come and visit us soonest, I rest my case!
Have a wonderful September until we chat again!
Warmest regards
The fabulous T-team