Hello again from slightly more fresh and nippy Madikwe.  Yes the season has started to change and the mornings and evenings already have a bit of a bite in them.  Not too long before you can look forward to hot water bottles in the beds and crackling fires in the rooms and main lodge.

A last bit of rain earlier in the month, has given new live to the parched bush and the trees vigorously started pushing new leaves and dead grass became green almost overnight.

One such sighting in particular was one afternoon, when we decided to head into the south-east of the park searching for rhinos and whatever other treasures the bush may hold.  We were not far from the lodge when the call came in that there was a glimpse of a leopard as he jumped out of the tree where it had stashed a kill.  Well great news, but we know how fruitless it can be to go and look for a skittish leopard; basically you have two chances of seeing a skittish leopard, zero and nothing.

So continuing on our merry way we head of to the east, finding a few good sightings, while listening with half an ear how hopeful guides call into the area where the leopard has been seen, but a while later departing without a leopard sighting.

After our sun downers I decide to go past the tree where the kill is stashed, so at least the guests can say they saw a leopard’s kill in a tree.  Cornelius had the same idea and we meet up next to a large Leadwood tree where the kill is supposed to be, but the leafy canopy is very thick and one can’t really make out the kill in the glow of the spotlight, so I resort to telling the guests how sneaky and sly a leopard can be and that the chances of seeing this particular leopard is zero due to it not being used to vehic….. O hello.  From nowhere a magnificent leopard appears and stands in the fork of the tree with an expression of “what were you saying about me”.  My mouth continued the rest of my sentence but no words came out.  I looked over to Cornelius and was glad to see it was not only my jaw lying on the road next to the game drive vehicle.  For a split second I thought of actually taking a picture of Cornelius rather than the leopard, just to catch that stunned expression on his face. 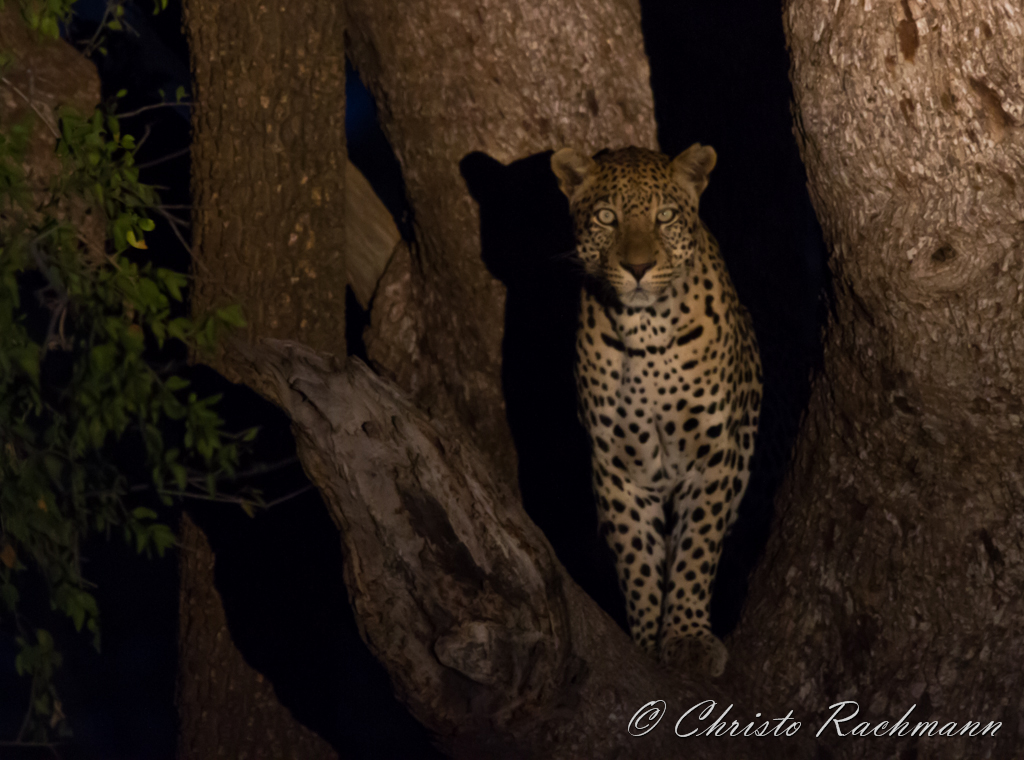 The leopard stood in the fork of the tree a while longer, then probably realized we were a bit stunned and were not going to make any further remarks on his character and promptly went for a nap on a nearby branch.  We sat there for a while longer occasionally shaking our heads in disbelieve before going home.

The other brilliant sighting happened one morning in the mist when we found the Mica, Jamala and 2 young Matlapa lionesses lounging around.  We sat with them for a while before they picked up on something on the nearby hill.  We could not see what they were after but they kept on looking and slowly making their way towards the thick bushes at the foot of the hill.  It was only after a kudu gave an alarm bark and a small group of kudus scattered up the hill side that we realised what they were after. 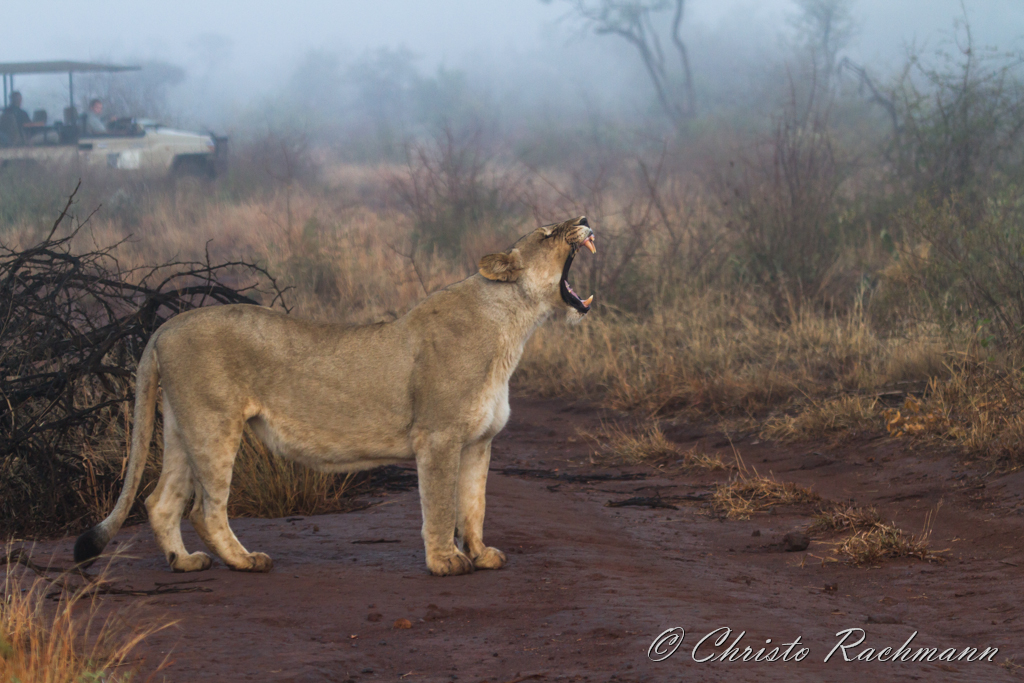 The lions lost interest and playfully walked in the other direction before something else caught their attention.  The lions fanned out and in the mist and tall grass we lost track of some of them.  One of the older females stayed behind close to the road as we followed one of the youngsters as she cautiously made a big loop around whatever they were after. 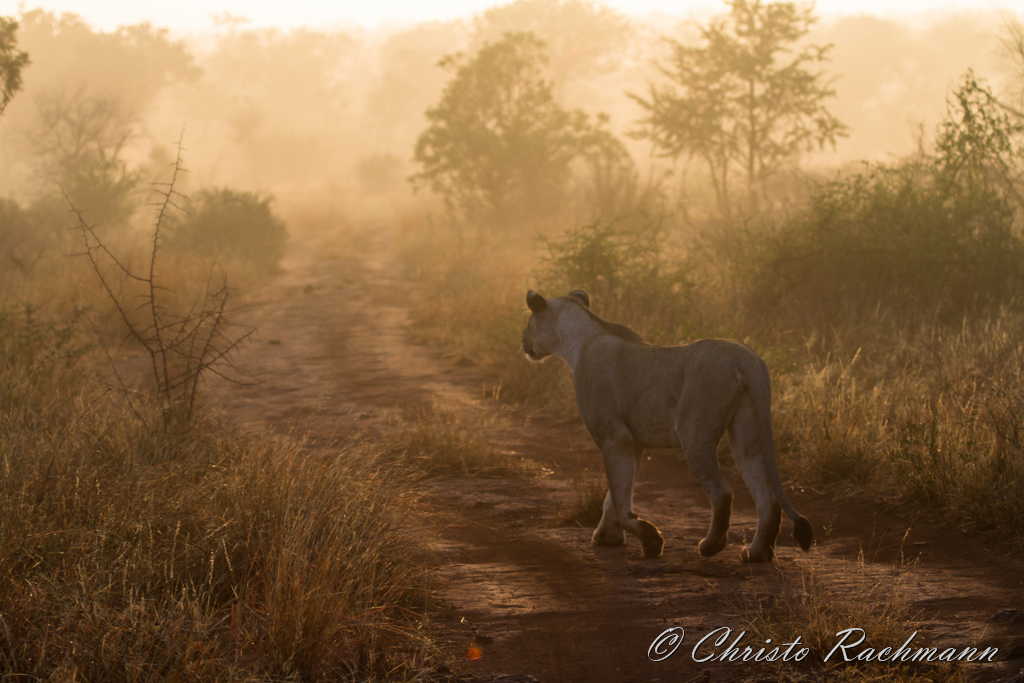 Eventually in the distance we saw some zebra, the cause of their stealthy stalking.  We were still watching the youngster when the zebras burst into a thunderous run, spooked by a lioness we lost track of.  This clever lioness sneaked passed, to behind the zebras before she launched her attack, cleverly knowing the position of the other older female that stayed behind close to the road.  The zebras were oblivious that they were being herded straight towards the other lions.  I sprang into actions and hastily made my way towards the lioness close to the road, hoping that the lionesses’ plan had worked.  It did, the lions had managed to grab hold of a big mare and were struggling to bring the zebra to ground.  The zebra fighting for dear live stayed on her feet and miraculously managed to spring free from the lions.  Running right passed us with the lions in hot pursuit.  The zebra did not reach far until one of the big lionesses’ again managed to grab hold and execute a powerful dive on the zebra, which made the zebra execute a sideways summersault. 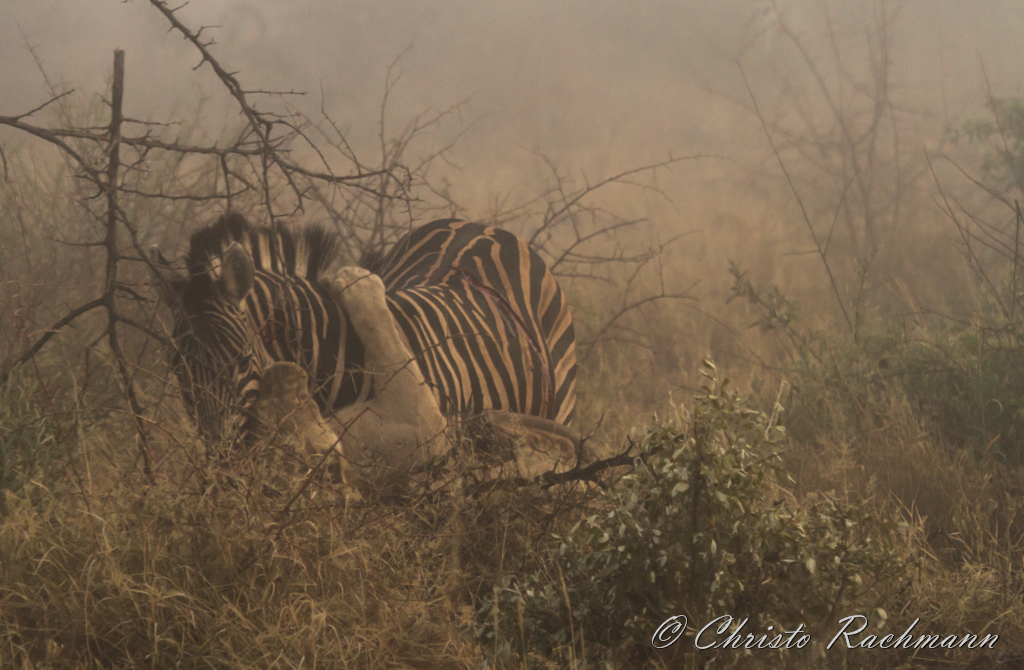 The rest of the pride was quick to pounce and soon the zebra succumbed to the lion’s death grip on the throat.   This sighting again left us in awe of nature’s brutal and unforgiving power and would definitely last in our memories for a long time. 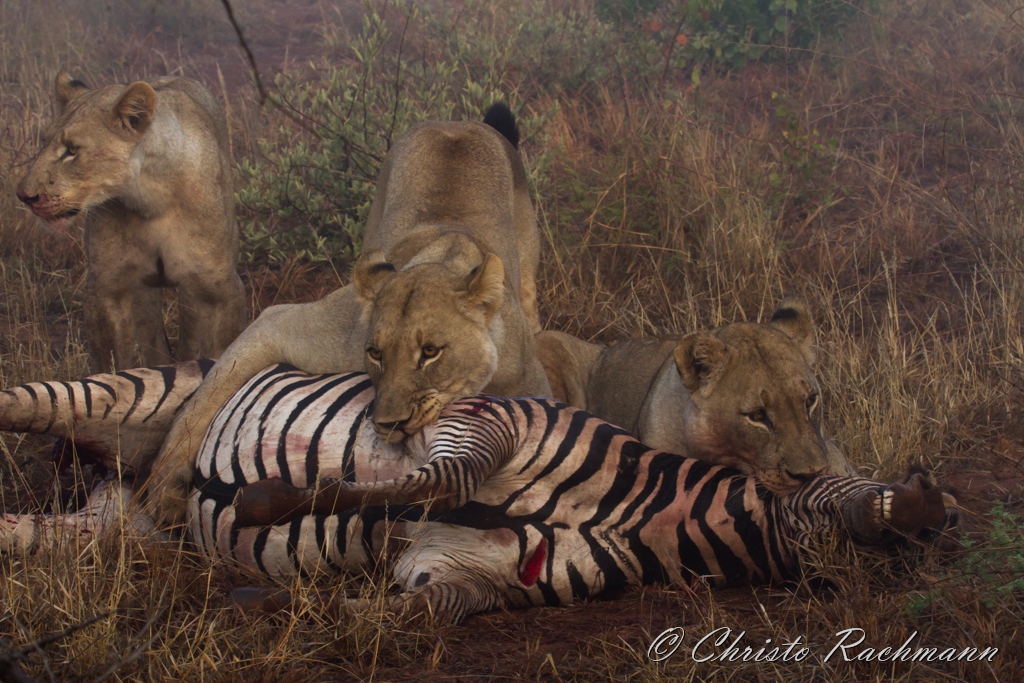 Tsala the relaxed female leopard from the south-west was also out and about and we found her one afternoon leisurely strolling about.  We followed her for a while through the bush and then our hearts skipped a beat as she made her way to a big Marula Tree.  Climb the tree, climb the tree, we were prying in unison.  Then in the blink of an eye she is up the tree and nonchalantly goes and lies on a branch, as if to say now you can take pictures, humble servants. 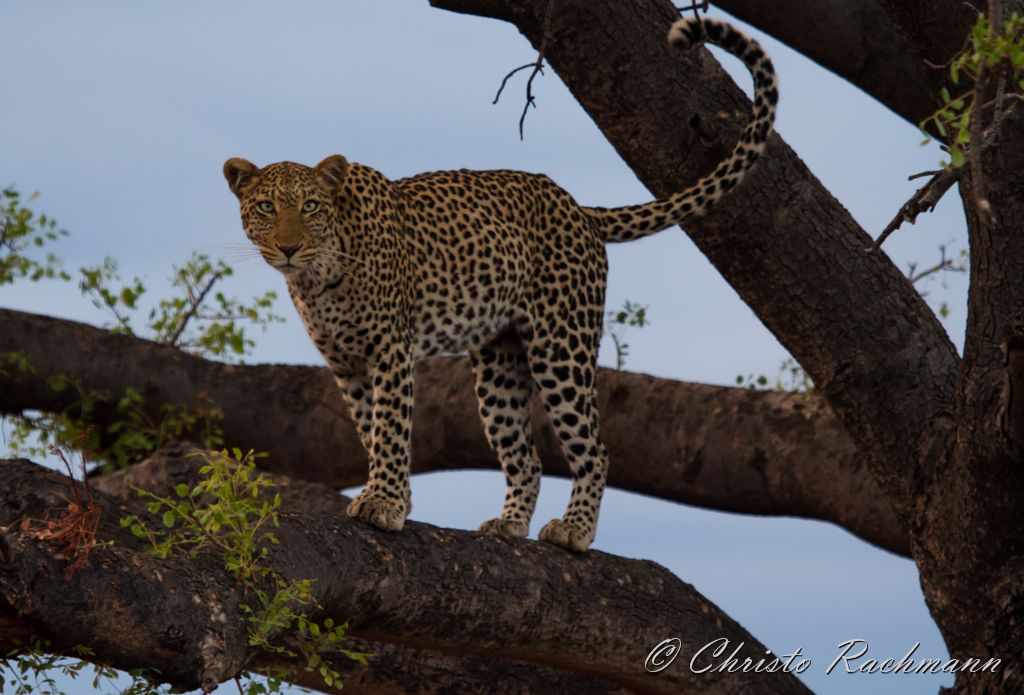 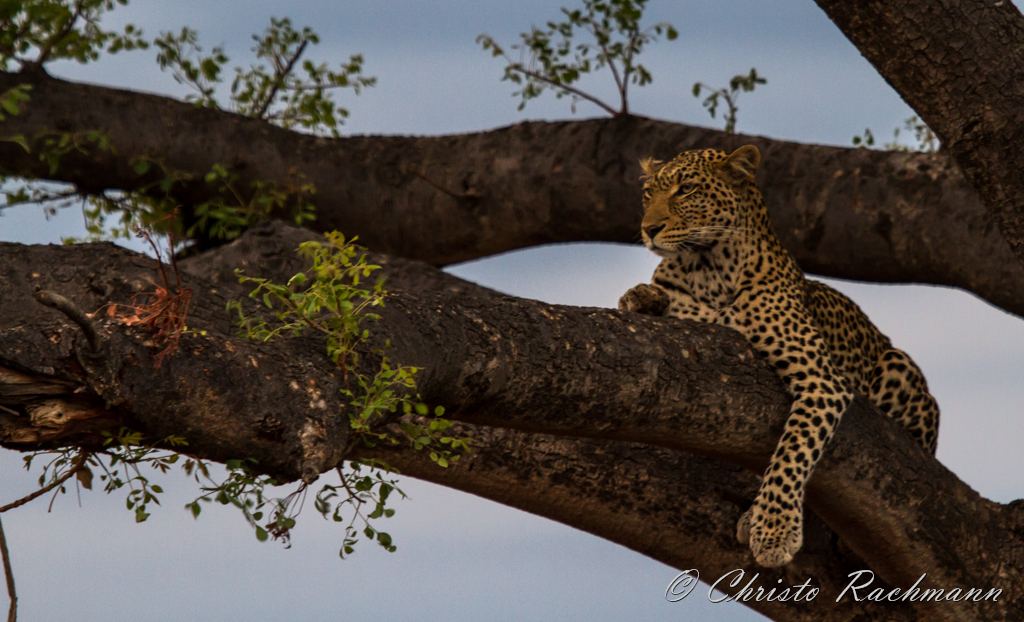 Well I can certainly wright a book about all the sightings we’ve had this past month, but think it would be better if you come and see it for yourselves.

Hope to see you back in the bush soon to join us on our daily adventures and endeavours.

From Christo and the T-Team

One thought on “April 2015 Newsletter”