Tuningi had a fantastic September with extraordinary sightings and great guests. We even had the pleasure of being blessed with a bit of rain that was just enough to get that amazing fresh smell you can only experience in Africa called Petrichor. Petrichor is a new word Cornelius taught me recently which is the earthy scent produced when rain falls on dry soil. Lets get to some of the sightings and news we have for you. 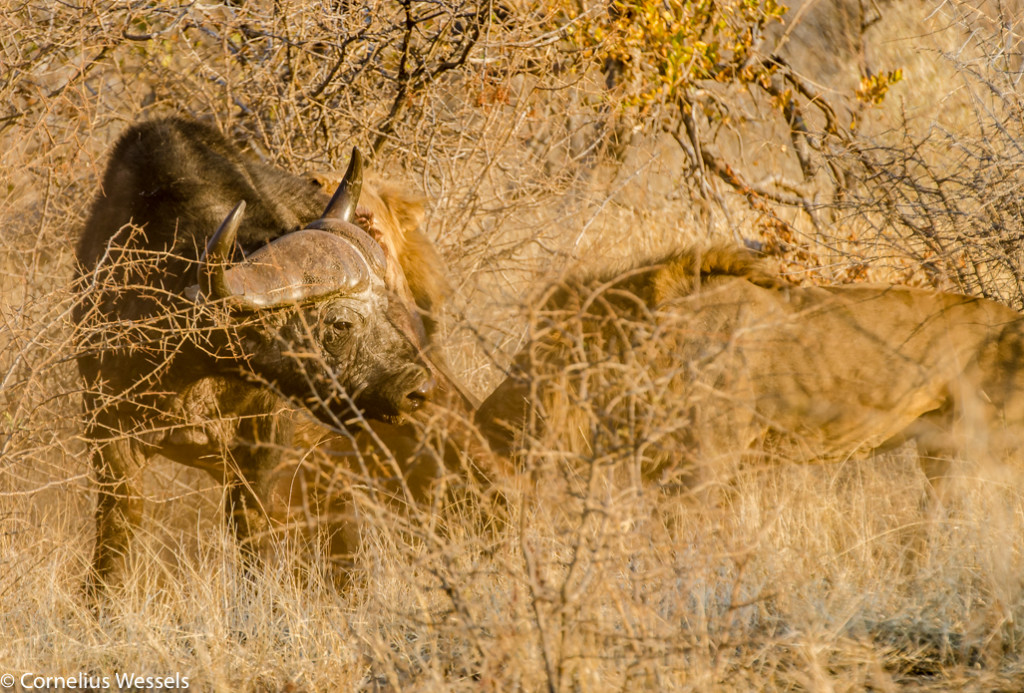 I cannot start with any other sighting than this incredible encounter between buffalo and lion. On departure from the lodge one morning we were informed by one of our friends that he has found two of our dominant male lions. The news were welcomed with great enthusiasm since it was close to the lodge and what more exhilarating way to start the day. 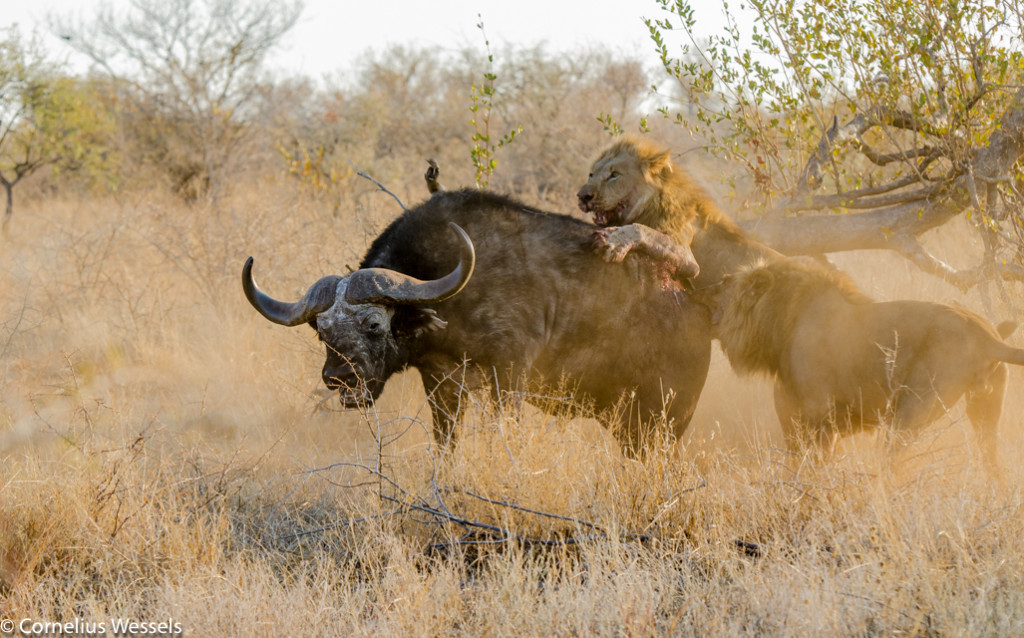 As we arrived at the location we observed two lion brothers interacting with two buffalo bulls. The intention of the lions were to separate the buffalo from each other which would allow them to focus only on one and to prevent the other from helping his comrade. Buffalo are known to defend each other in occurrences like these and might even return to settle the score and retrieve its fallen comrade. Male buffalo physically peak at about 10 years of age and normally leave the herd once they have been conquered and replaced. This by no means mean they are easy prey. The lions succeeded with only one buffalo left to take on the fight. 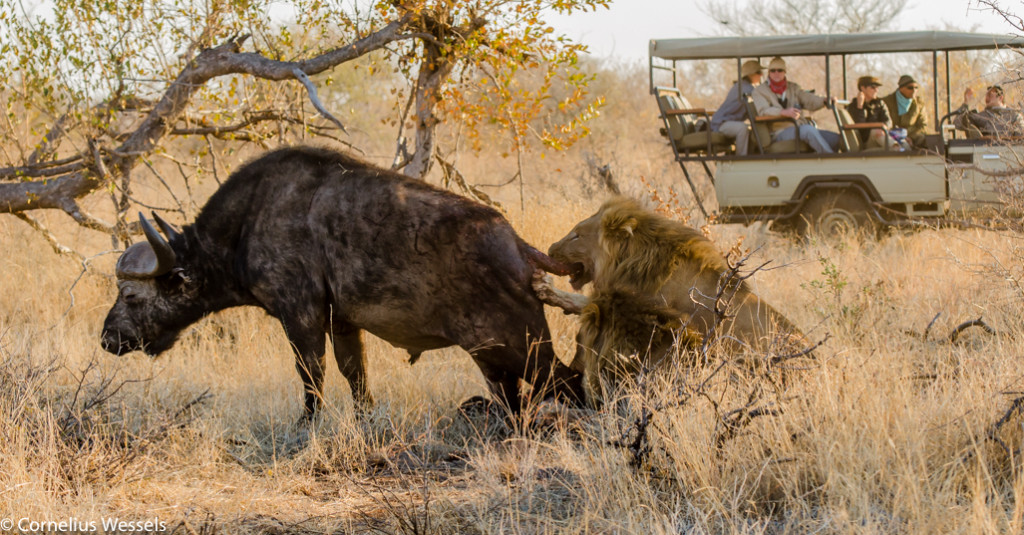 Then the struggle began. Even though this was quite an old Buffalo, they knew it would be a struggle to take him down. Buffalo, in my opinion, is the real life representation of never giving up, being known for their brute strength and and mean demeanor. 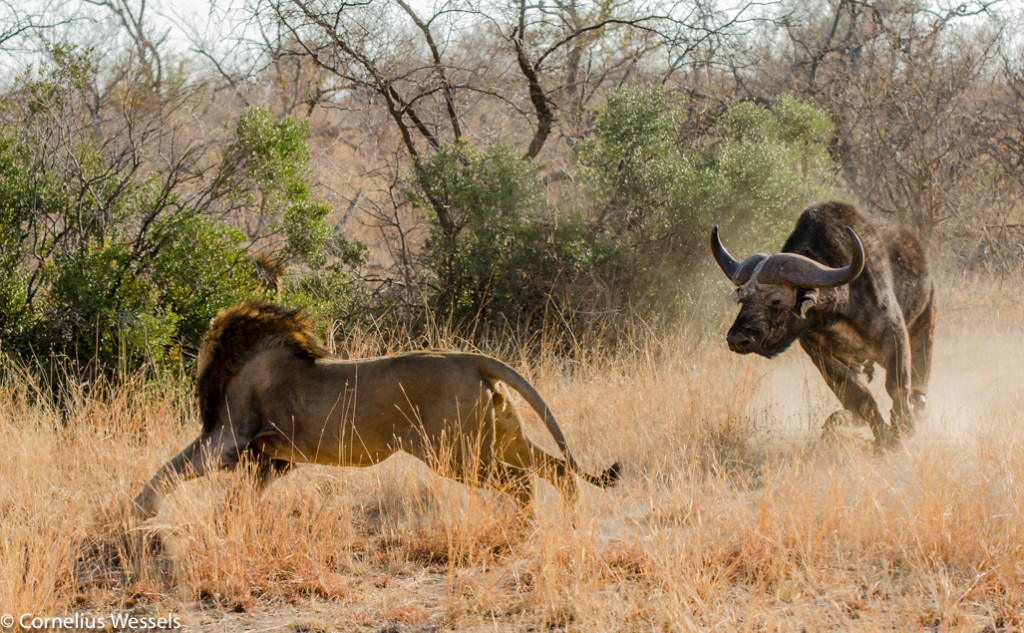 In this photograph, if you look closely, you can see both his back legs are pointing forwards. Lion are known to attack the hind side and rear legs. By this point the lions have tried to immobilize him by chewing of the back leg tendons. The buffalo is chasing the Lions around on his knees. This Buffalo would not give in, he would not surrender, showing of his never say die attitude. What a legend. 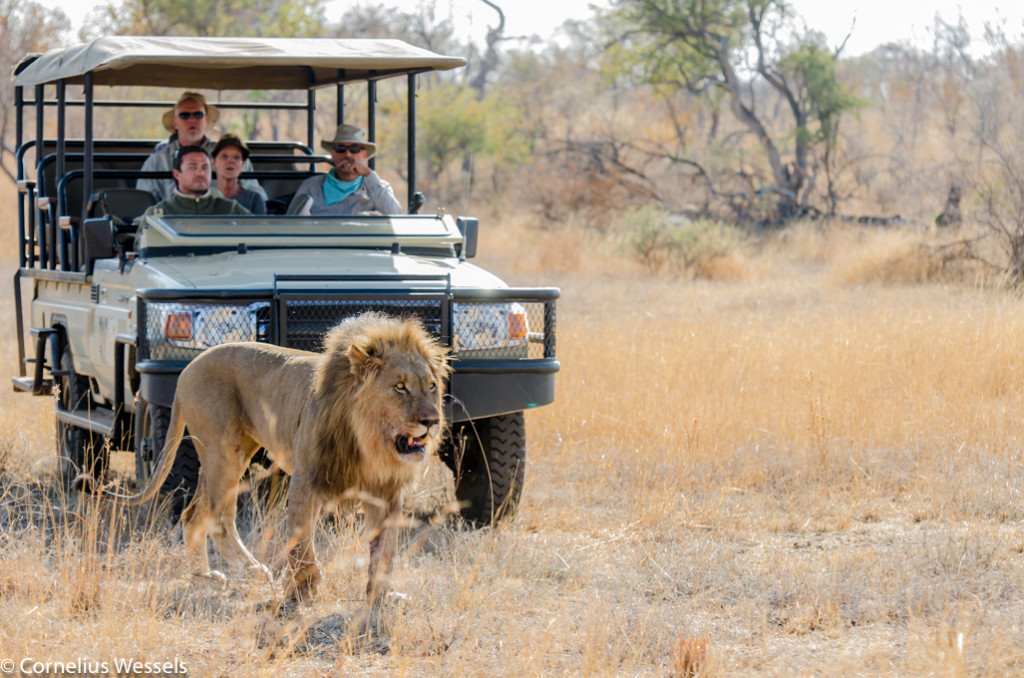 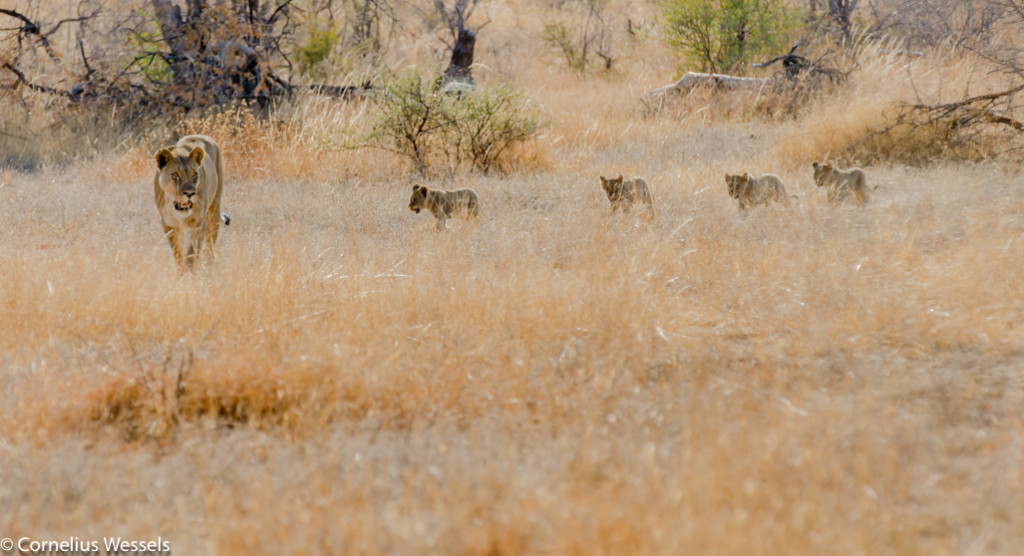 This continued for about an hour before the third male joined in the action. Now three male lions were still unable to bring down the interminable fighting buffalo. Enter the five females and the six cubs, still being unable to end the struggle. 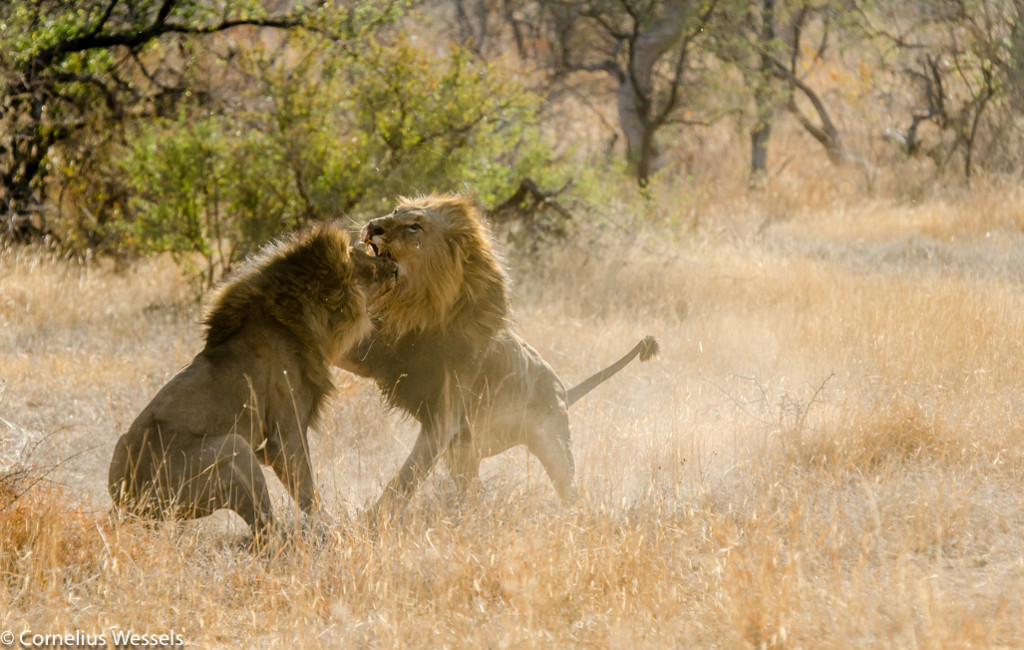 After the female Lions entered the fray, one male started showing a bit too much interest in a female in in heat. The dominant brother of the three took offense and the brothers had a scuffle. This while the Buffalo on three legs were still alive and surrounded by the remainder of the pride. Two and a half hours later we eventually decided to head back to camp. 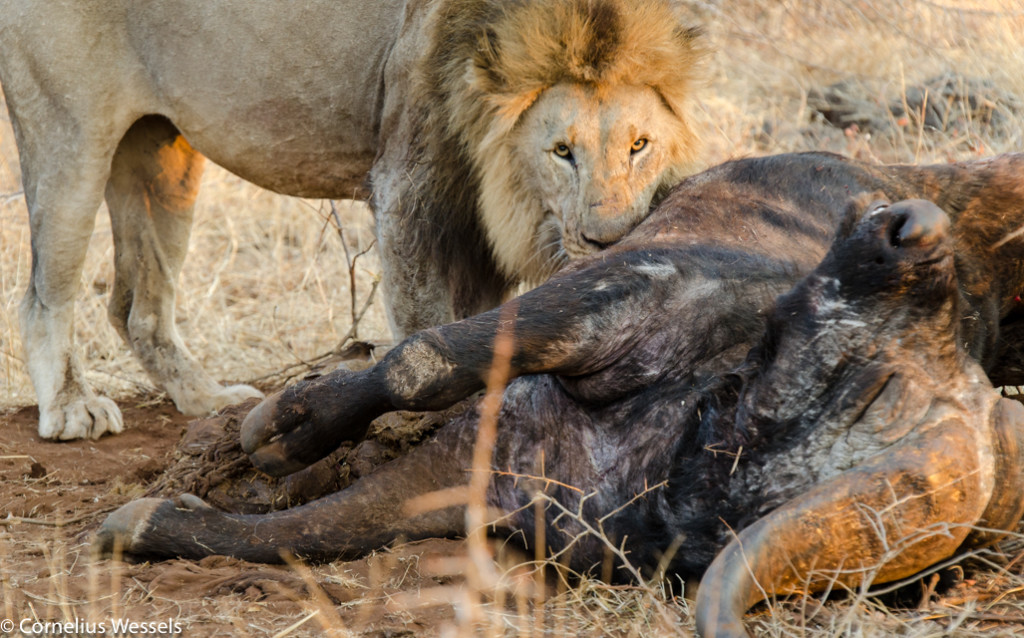 The following morning, almost 24 hours later, the lion pride managed to finally take the Buffalo down. Almost five kilometers from where it all started. What a sighting. Hats off to the Buffalo that wouldn’t stop fighting. 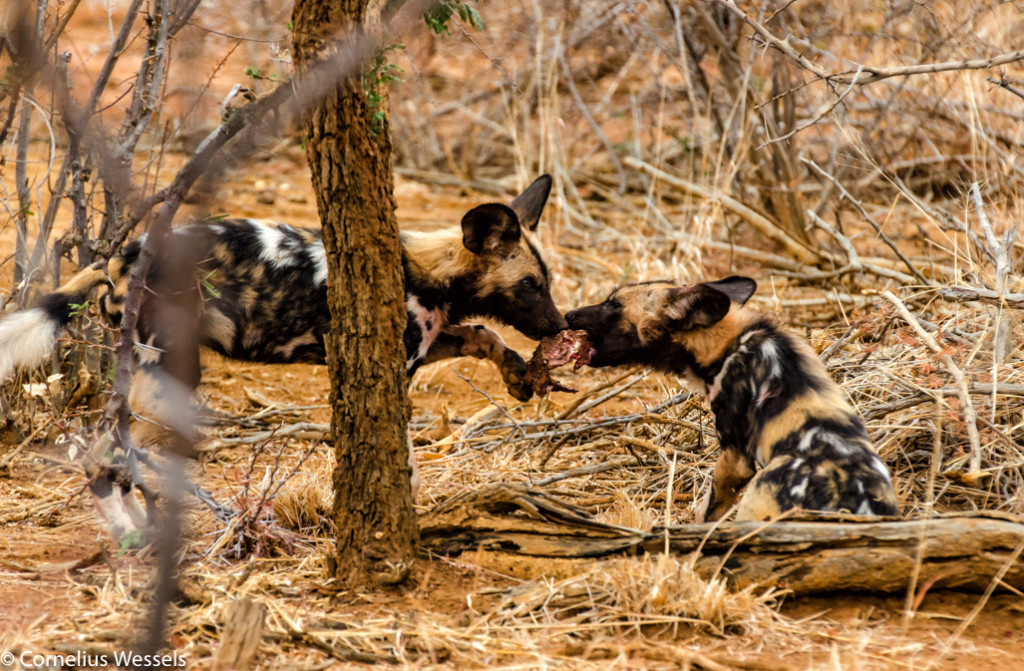 The Wild Dogs have finally started moving away from the den site in the mountains. They came to visit our area for a while. The pups are about six months old now and looking very healthy. We are proud to say the Wild Dog population is now up to nineteen Dogs. They are slowly rebuilding after the rabies outbreak a few years ago. 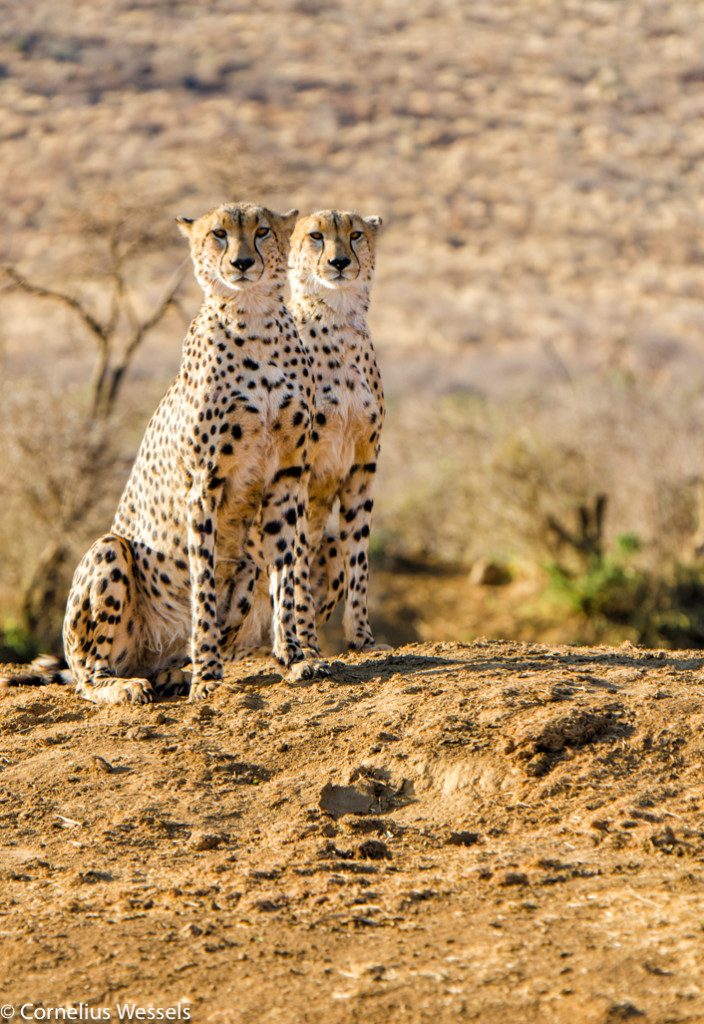 The male Cheetahs are still doing very well and we see them often. There is some news on the Cheetah front. The shareholders of some lodges banded together to get some female Cheetahs to Madikwe. This is a very difficult process since there are so few wild female Cheetah out there and owners’ don’t really want to let their females go. They eventually got three females from a breeding center. This is not ideal since they have never been in the wild, are not familiar with the new environment and being around other predators. An action plan is in place to overcome these issues, but only time will tell. At this point we are trying to be positive and hopeful that they will make it once they get released into the main park. 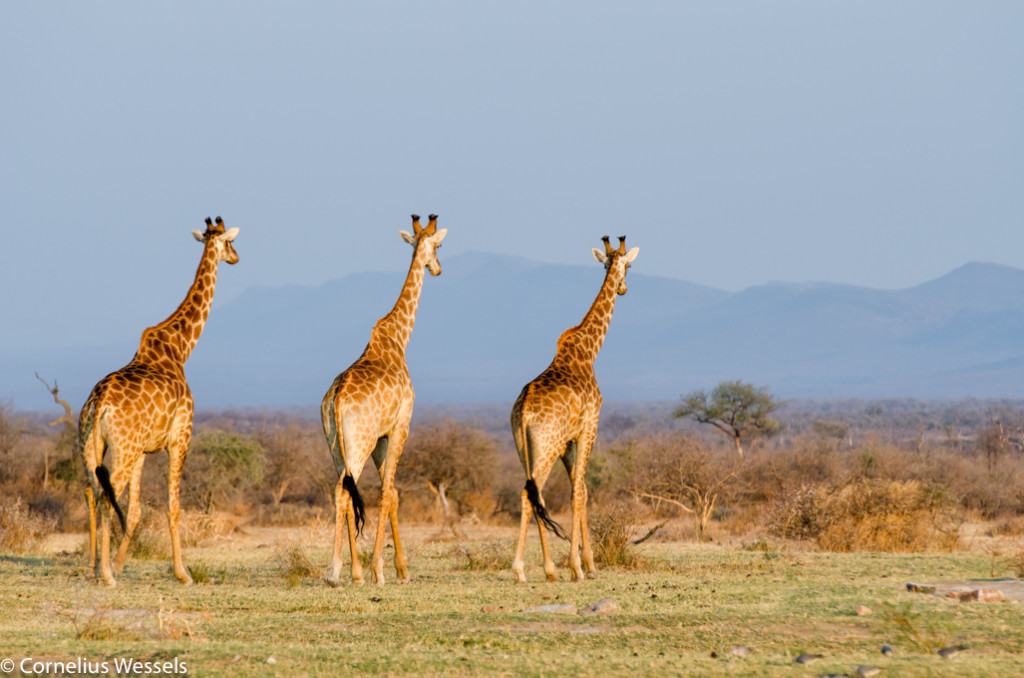 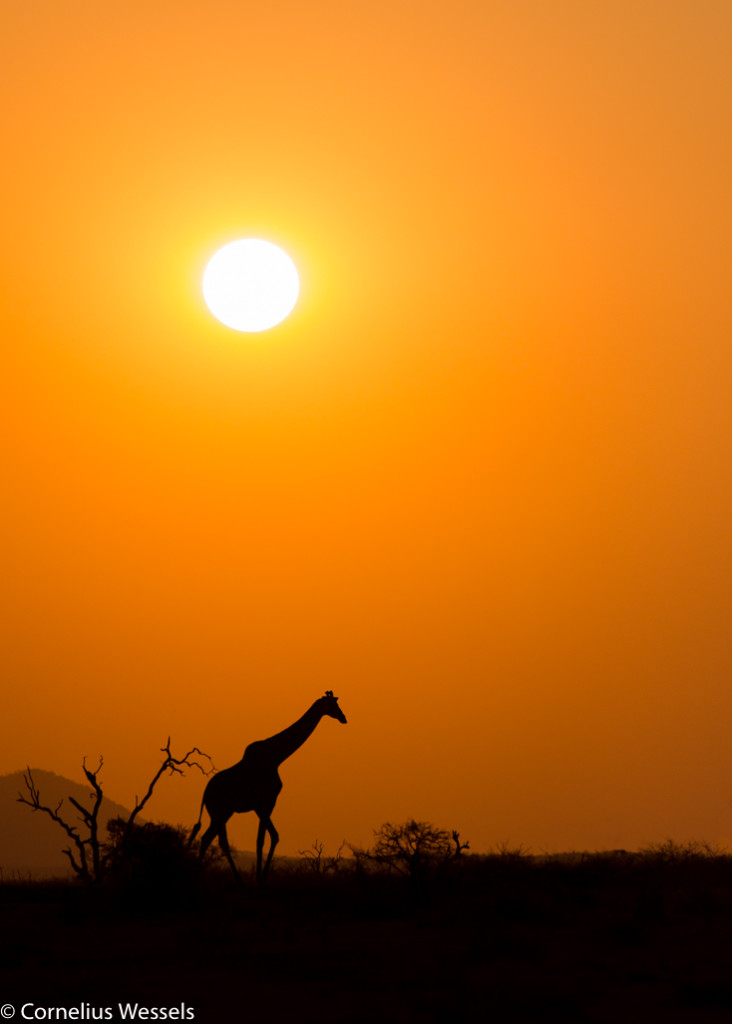 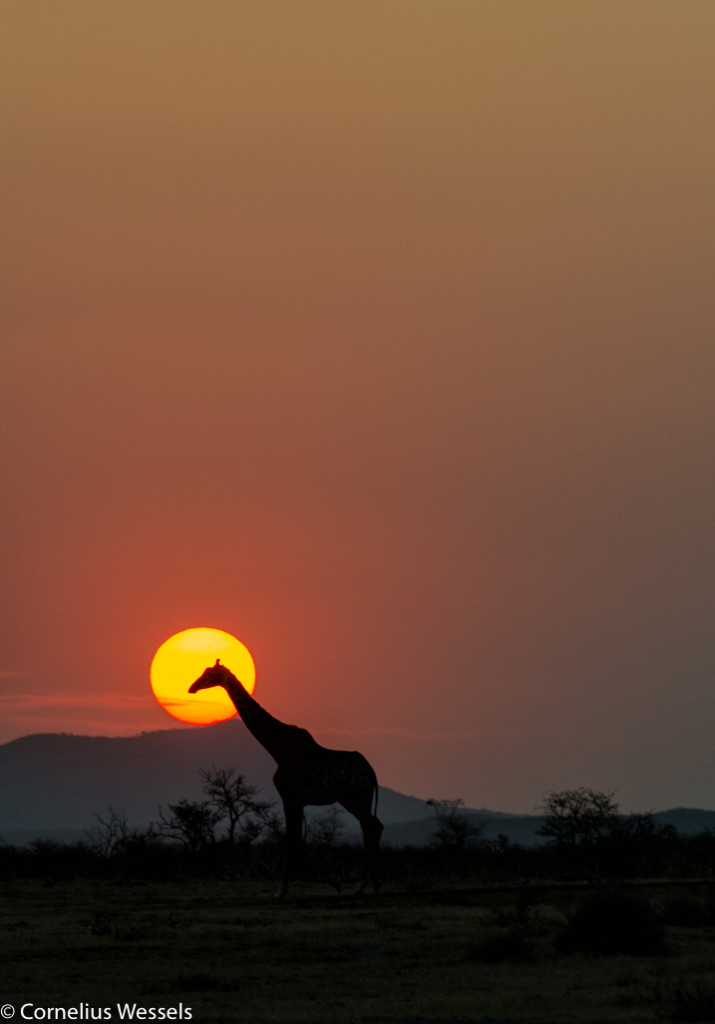 And that is all the news we have for you. Who doesn’t love a Giraffe and a sunset…