Hello all once again…

This morning we left the lodge with the mission…. to find lions !!

Well, it started off pretty quietly, until Cornelius managed to locate on some fresh tracks, which by the way are very tough to see nowadays with all the rain we have been having, and we followed them through some wet grass for around ten minutes in a westerly direction, before we lost the tracks and our boots and socks got soaking wet. We decided to give up on those tracks and went in search of the other pride further to the north.

Anyway… after more searching we found nothing, and decided to stop for a coffee break to reboot the minds.

On the way back to the lodge we located on the Jamala females and their cubs, and they seemed to have killed a wildebeest, but there was something in the road that was lying very still….. it was a brown hyena !! The poor bugger probably got a little too close to the lions wildebeest kill, and found himself on the receiving end of 3 inch canines, and was killed.

Brown hyenas often follow lions and other predators around, in the hope that they will get a scrap from their kills when they leave, but they also do catch their own small prey including scrub hares, baby impala and wildebeest, and even insects and fruit found in the bush.

Sometimes you are hit with the reality of the harsh conditions that these animals find themselves in, and if it means that they kill each other off to eliminate competition… then so be it !! 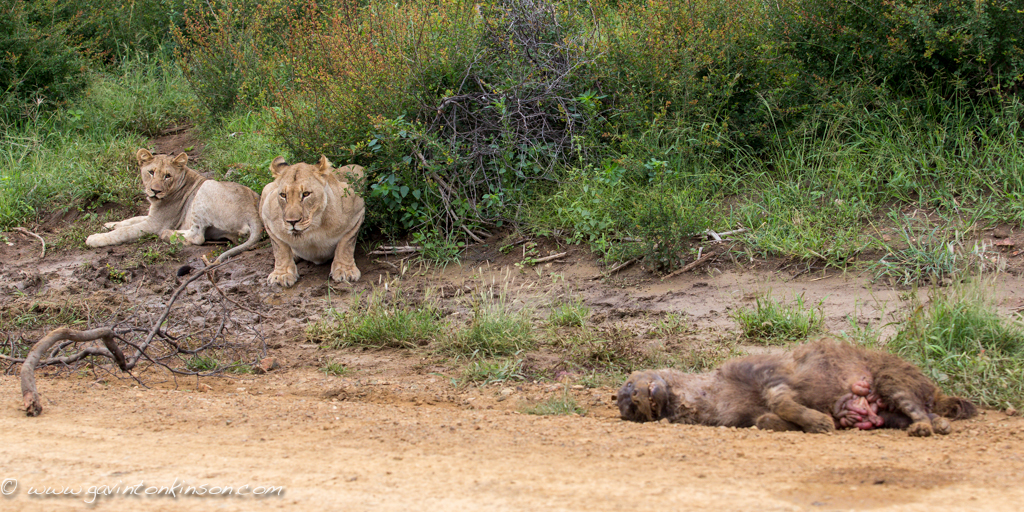