We finally had some rain to give everything new life!! 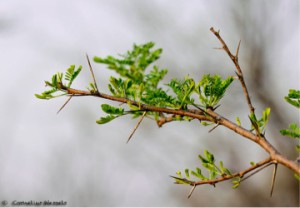 Although it was not nearly as much as we have hoped for, we could see a noticeable difference within a week after it rained with the trees especially starting to push new leaves.  Now we are just desperately waiting for more.

All the animals are enjoying the arrival of summer and new life coming with it.

As always we were totally spoilt with the quality of sightings we had.  Here are just a few of the most memorable sightings for October.

It helps a lot to be in the right place at the right time.

Well, just that happened to me this month, twice!

Jip, I saw two Wild Dog kills. We saw the dogs briefly early the afternoon but with little action.  So I decided to go stop for drinks to let it cool down.  We stopped not too far from Tholo dam and waited for the dogs to get a bit more active. 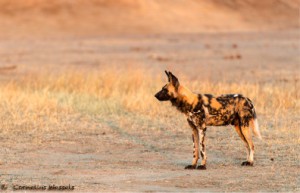 As we finished our drinks the dogs were at the dam.  They were all over the place having fun in the last rays of the sun and then just disappeared.  We drove all over the place looking for them but with no luck.  And then, as the saying goes, the harder you try, the luckier you get!

As we drove closer to the dam again we saw that they had chased a Blue Wildebeest into the water. There was no hope for the poor guy.  It took a while before the adults finally killed it, right in front of our eyes!

The other kill was on the fence in the south of Madikwe.  Early the one morning we found them running around without purpose.  The 6 pups were far from the adults playing with whatever they could find.We heard the sound of hooves on the rocks and all hell broke loose.  It was an Impala they targeted.

They chased it to right behind my vehicle and this time the fence they use so often did its job. 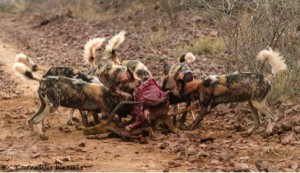 I quickly turned around and within 10 seconds the Impala was dead and they all tucked in.  An absolute privilege it has been to witness nature in full force!!!To find the Cheetahs is also always a thrill.  These four boys move all over Madikwe and at times finding them is a big challenge. Lucky for us they did spend some quality time in the South this month, so we got to see them fairly often. 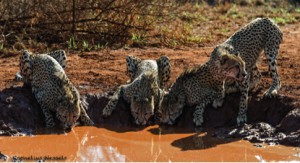 With it still being fairly dry and dusty out here,the late afternoons provide some amazing colorful skies. 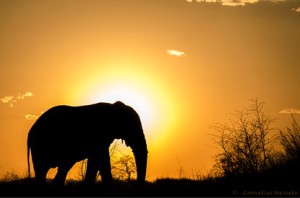 To end the day with a Gin and Tonic in the bush and watching the sun go down…nothing can beat that.

Make that booking now to come and share in our wonderful daily adventures! 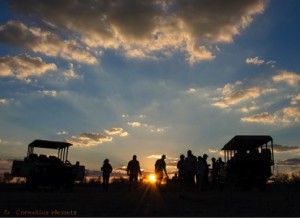