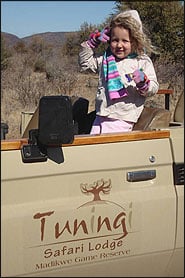 Greetings to all of you once again!

As usual we are standing in awe of nature and the greatness of it all.

During the windy, dry month of August all at Tuningi had the privilege to observe the behavioural changes in the animals of Madikwe in their great struggle for survival. As the months go by and the condition of the bush deteriorates, every animal has to work out its own way of dealing with hunger and the scarcity of water.

Some animals like the Kudu who usually eats only leaves can, all of a sudden, be seen eating grass. Elephants have been pushing the trees down to get to the nice juicy bits of roots just under the ground. The Impala on the other hand, out of the blue, eats leaves instead of grass. The baboons have to rely on protein like insects and birds instead of the fruits, berries and flowers they are used to eating.

The predators, on the other hand, are giving birth to their young all over the place. The reason being that the animals they usually prey on, are out of condition and don’t have as much energy as usual. This obviously makes the hunt easier and gives the mothers a great opportunity to feed their young as much as possible to make them strong and healthy.

Tshaba, the beautiful, strong, new mother lioness, has been showing-off her three, healthy looking cubs on a regular basis. They are all in mint condition and it is clear that they have more than enough to eat at the moment.

The pack of eight wild dogs has all of a sudden changed to the pack of eighteen wild dogs as one of the females had TEN healthy puppies. Unfortunately, we do not have a photo for you yet, but will show you some pictures next month. She is an extremely good mother and keeps them in hiding all the time. The rest of the clan is hunting a lot and taking the food back to her and the pups so that they keep healthy and strong. The pups have been seen twice, so far.

The other day we were sitting at Tau dam when seven of the wild dogs all of a sudden appeared, chasing a female kudu. The kudu decided to run into the water to get away from the dogs, but as we all know, nothing chased by wild dogs, ever escapes death. The dogs promptly killed the kudu right in the water and munched away happily until some elephants got thirsty and made their way to the water.

This caused havoc as elephants never like to share their drinking spot with anybody. They chased off the dogs that had to wait patiently for them to quench their thirst, before they could return to their feast. When they had their fill, they most probably each took a few bites back to the den where the new mother was waiting.

We have also found a brown hyena den with three of the cutest looking little babies you have ever seen. Brown hyenas are dark, shaggy looking creatures looking almost like a German Shepard dog. They live south of the Zambesi River in Zimbabwe, Botswana, Namibia and Southern Angola. They have been exterminated in South Africa except for the northernmost Northern West Province (where we are located) and the Northern Cape provinces. With them being so rare, we are always extremely grateful when we see them breeding successfully like this. We estimate that we have between 10 and 20 brown hyenas in Madikwe.

August brought more excitement in the way of us getting invited by Parksboard to bring our guests along one evening while they were branding some lions. We all got the opportunity to see how the lions were darted, fell asleep, got branded with a hot iron, measured and examined and finally woke up in a horrible state of grumpiness. Even the children could get out of the vehicles, once the lions were unconscious, to go up and touch them and really inspect them from close up. This was a most memorable evening and we are so happy that the lodges and the parks officials have such a good relationship so that we can all share in these adventures. The branding of the lions helps us and all the rangers to keep track of which lion is which and who is mating with whom, etc.

And finally…… As always we had the opportunity to meet wonderful people like you who arrived as strangers, but left as friends. We also got to know and love so many of your children and hope that we have left a little footprint of the bush in their hearts which will urge them to conserve nature when they grow up and make them want to came and visit us here at Tuningi, every year from now on!!!

We are looking forward to next month which will hopefully bring Spring.

Hope to see you all again soon!
Kindest regards
The T-team 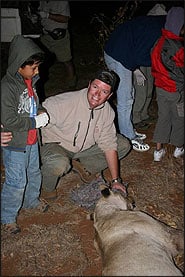