Yesterday afternoon turned out to be a rather amazing experience.  After a great sighting of 3 of the Big 5 in one shot ( Elephant, Rhino and Buffalo) all together, we were just happily bumbling along when we came around a corner and found a Zebra mare that has just given birth.  To see a birth in the wild is pretty rare as the animals usually move into some thick bush to give birth in private, in an attempt to avoid predation.  Luckily for us the mare decided to give birth right next to the road. 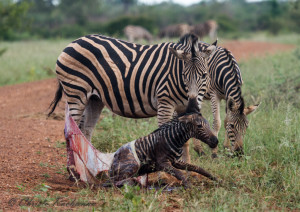 We diced to hang around to witness the new-born’s first steps and he didn’t keep us waiting very long. About 5min after we arrived he succeeded in getting to his feet in the first attempt.  Impressive. 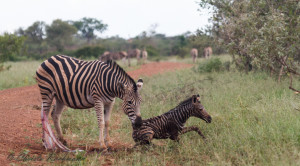 He was able to stand for a minute or two before tumbling back down.  After 3 more attempts he was able to find his feet. 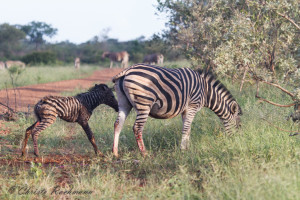 Introductions to some of the other herd members also didn’t take long, as another young zebra came over to inspect the new arrival.

And then just like a proud mother she showed off her baby for a few final pictures before leading the youngster into the bush. 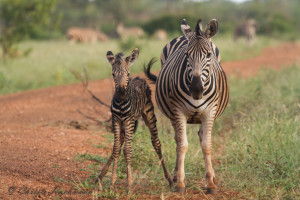